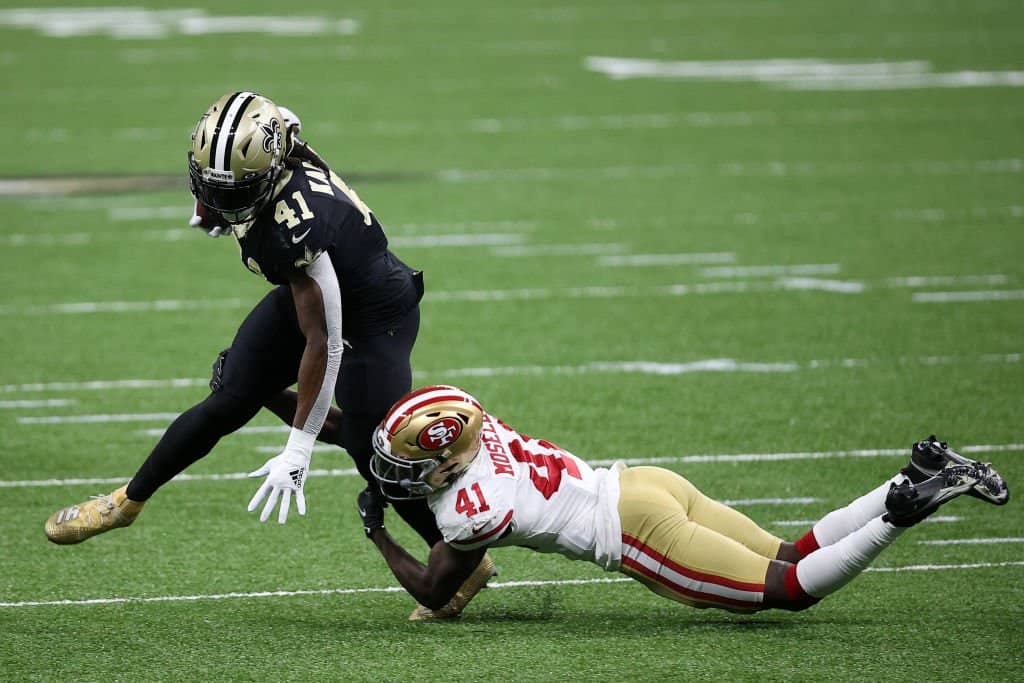 NEW ORLEANS, LOUISIANA - NOVEMBER 15: Emmanuel Moseley #41 of the San Francisco 49ers attempts to tackle Alvin Kamara #41 of the New Orleans Saints during their game at Mercedes-Benz Superdome on November 15, 2020 in New Orleans, Louisiana. (Photo by Chris Graythen/Getty Images)
What's in this article? Click to show
Latest practice status for Alvin Kamara
Saints RB Alvin Kamara nursing a foot injury and not seen at practice Wednesday
Alvin Kamara has been the best running back in fantasy for 2020
Despite his injury, Alvin Kamara is an elite RB1 in Week 11
Want more fantasy football analysis and news?

With only a few days left until Week 11 is in full swing, there is not much time left for players to recover from any injuries they are currently dealing with. One name that jumps off the injury report page is New Orleans Saints RB Alvin Kamara. Heading into their game against the Atlanta Falcons with a new quarterback under center, Alvin Kamara should be heavily relied on, but will his injury get in the way of what could have been a fantastic fantasy opportunity?

After being removed from the injury report on Friday, Alvin Kamara is active for the New Orleans Saints Week 11 matchup with the Atlanta Falcons.

Nick Underhill of New Orleans Football reports that Alvin Kamara (foot) was a limited participant in Wednesday’s practice. He noted that the running back missed the portion of practice open to the media. On Thursday, Underhill reported that Kamara was a non-participant.

The Saints are already heading into the game without one of their franchise pillars, as QB Drew Brees starts his recovery from multiple broken ribs and a punctured lung. Also, Tre’Quan Smith (concussion) could be in danger of missing Sunday’s divisional contest against the Falcons, meaning Kamara may see a chance to take on an even larger offensive role than normal if he’s able to return to full health.

Those of you yelling at me saying that Davin Cook is the best, I hear you, but no, it’s Alvin Kamara.

Do you like consistency? How about the fact that Alvin Kamara has finished as an RB10 or better in every single game this year, including finishing five of his nine games inside the top three in PPR scoring.

Take a glance at what Alvin Kamara has done as a receiving back in 2020. He has 648 yards through nine games; the closest person to him is J.D. McKissic with a whopping…291! Just as a receiver, Kamara would be WR11 on the season. Not only is he the RB1, but he is also a WR1 in fantasy.

After agreeing to a five-year, $75 million contract extension in September, Kamara has proven to be worth every penny as the Saints (7-2) have ridden their star running back to the top of the NFC South.

Heading into Week 11, Kamara leads the team in carries (104), rush yards (486), rush TDs (seven), targets (80), receptions (67), and receiving yards (648). He’s also tied with Jared Cook for the team lead in TD receptions with four. Kamara is on pace to become the first player in NFL history to post 800-plus yards rushing and 1,100-plus yards receiving in a single season. Kamara has been targeted on 36.9 percent of his routes this season, the most in the NFL.

Even with Jameis Winston under center and Alvin Kamara dealing with a slight foot injury, I don’t see any reason to panic about his future for fantasy football. If anything, this is another way for him to showcase his talents.

Despite his injury, Alvin Kamara is an elite RB1 in Week 11

If it was anyone else in this matchup, you might be a bit concerned about having a running back go up against the Atlanta Falcons defense. The one thing they have been good at all year (other than blowing leads) is stopping opposing running backs on the ground. The Falcons give up the seventh-fewest fantasy points to running backs at 20.81 per game through nine games.

However, that is a bit misleading. The Falcons actually give up the fewest points on the ground to opposing running backs at just 8.36 per game. But as we discussed earlier, Alvin Kamara, foot injury or not, is not a normal running back; he is also a wide receiver.

The 12.45 PPR points per game they’ve allowed to running backs through the air alone ranks as the fifth most in the league. Combine that along with the 44.76 per game allowed to wide receivers, and Alvin Kamara should have no issue at all continuing his streak of elite fantasy performances.