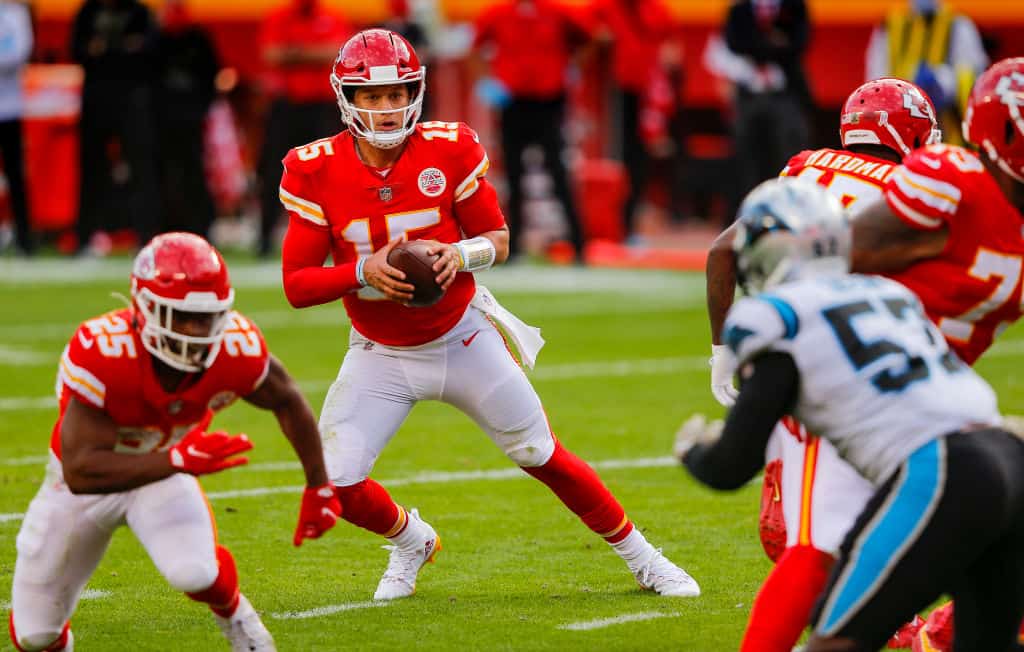 There are just four weeks left in the fantasy football season until the playoffs begin for most leagues. If you’re looking to get an edge over your opponent, look no further than our PPR Fantasy Football Week 11 Rankings for both 1QB and Superflex leagues. Here are some of the biggest fantasy locks of the week at each position in Week 11.

Week 11 Locks of the Week

When looking at the Week 11 schedule, some players, I believe, are absolute locks at their positions. It kicks off with Patrick Mahomes. In Week 11, the Kansas City Chiefs play the Las Vegas Raiders. Currently ranking 21st in fantasy points allowed to opposing quarterbacks, it’s hard to see how they will be able to stop Mahomes and this high-powered offense. He is as close to a lock as there is for fantasy in Week 11.

It took nine games, but Vikings RB did something he had never done this season last week, fail to score. Yeah, he had scored in every single game leading up to last week, so I think it is fair to cut the man a bit of a break seeing he still put up 112 all-purpose yards. Cook has rushed for over 130 yards in four games this year and leads the NFL in touchdowns with a baker’s dozen.

I made a cooking joke because Cook…okay, moving on. In Week 11, he matches up against a soft Cowboys defense that allows the second-most yards per game (157) and gives up the third-highest average at five yards per carry. Dalvin Cook comes in as the RB1 in the Week 11 fantasy rankings and is one of the locks to finish inside the top five this week.

I don’t know if we will see a better play all season that the “Hail Murray” last week where DeAndre Hopkins literally dunked in three Bills defenders to seal the game. Hopkins caught 7-of-12 targets for 127 yards and the game-winning touchdown last week and somehow has the chance to have an even better fantasy performance in Week 11. Looking at the schedule, you see the two words you love to see, Seattle Seahawks.

There is not much else that needs to be said about the worst passing defense in the NFL. They are on pace to give up over 1,000 more yards than any team has in NFL history and give up nearly two touchdowns more than the next closest team to opposing wide receivers (57.17 to 44.76). Having anyone else than Hopkins as the fantasy WR1 for Week 11 just seems foolish. Lock him in and pray you are not facing him this week.

The only reason there was another name atop the rankings last week was because the Chiefs were on a bye. Any other week, you should never expect to see another name on this list, and Week 11 is no exception when it comes to my rankings.

The TE1 on the season by a 50.8-point margin, Travis Kelce is the week in and week out TE1 in fantasy football. As we said with Mahomes, they are taking on the Raiders in Week 11, so there is no need to overthink his fantasy ranking for Week 11.

He leads the team in targets (80), receptions (58), yards (769), and is second in touchdowns (6). With George Kittle injured, there is no other tight end in fantasy football that can hold a candle to the value of Travis Kelce and his impact on his team. I don’t know if another player is a larger lock when it comes to his position against the rest of his contemporaries than Kelce in Week 11.

These fantasy football rankings for Week 11 were last updated on November 19, 2020, at 7:30 PM ET. Below, you can sort our PPR Fantasy Football Week 11 Rankings by league type (1QB or Superflex), position, scoring format, and rank. Mobile users: Please note that the rankings are best viewed in landscape mode.