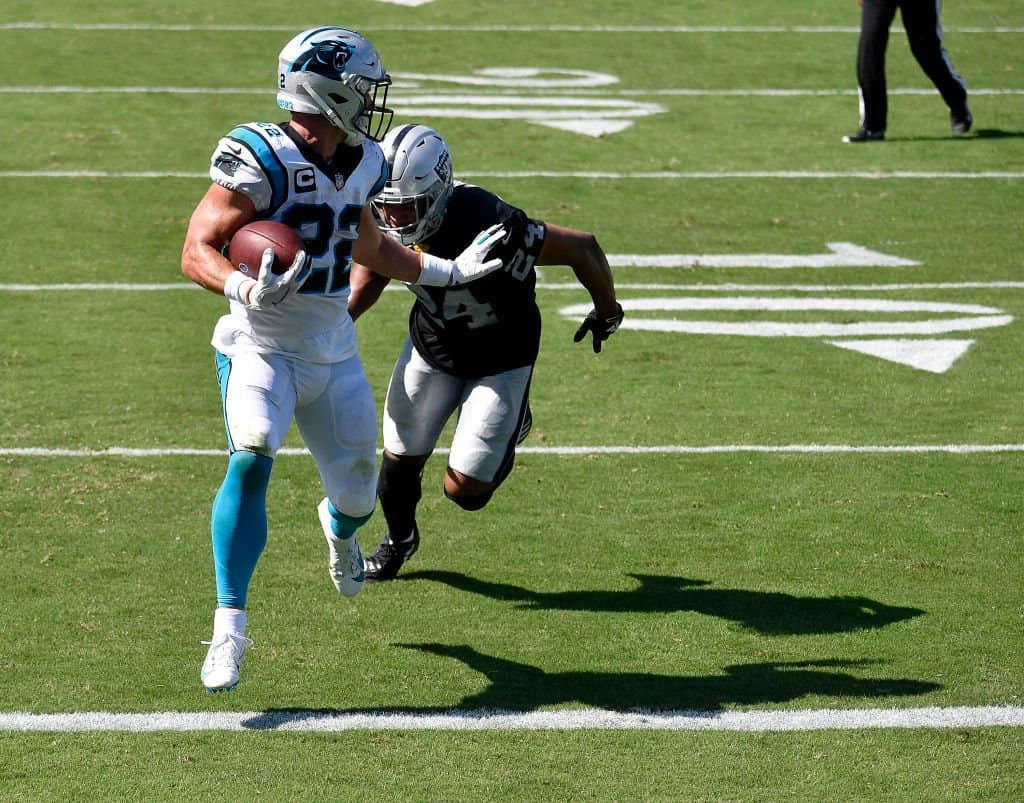 Now is the time in your fantasy football season where championship runs are made, but injuries can turn those epic surges into underwhelming collapses. Consequently, you’ll need to know the latest on running back availability throughout the week, so you can have contingency plans if your star running back is injured. With that being said, let’s take a look at some of the most relevant injury updates with this fantasy RB injury report, including bits on Christian McCaffrey, Joe Mixon, and Chris Carson.

Please note that we will continue to update this article as more news and injury updates become available.

Will Christian McCaffrey be an available fantasy RB in Week 11?

Christian McCaffrey has been a top-tier fantasy running back when healthy, but that hasn’t been often in 2020. McCaffrey has only played three games so far for the Panthers in 2020, and with fantasy leagues heading toward the playoff stretch, in a year marred by unpredictable RB play, McCaffrey’s status is more important than ever.

Wednesday, November 18: NFL Network’s Ian Rapoport is reporting that McCaffrey (shoulder) is not slated to practice today, source said. Coach Matt Rhule has expressed optimism about him playing this week, but no practice on Wednesday isn’t a great sign.

Monday, November 16: Adam Schefter reported this morning that Christian McCaffrey is “unlikely to play Sunday” against the Lions in Week 11 and specified that the Panthers are preparing for a “multi-week absence.” Things could change as the week progresses, but the fact that it’s already trending this way is disconcerting.

Sunday, November 15: Christian McCaffrey (shoulder) was ruled out of Carolina’s Week 10 contest against the Tampa Bay Buccaneers, marking his seventh missed contest of the season. With that being said, there was some optimism that Christian McCaffrey would only miss one game for a minor AC joint sprain. We’ll keep you updated on his status in the days to come.

Will Joe Mixon finally return in a favorable Week 11 matchup against Washington?

A few weeks ago, Joe Mixon was essentially implied to be week-to-week by Zac Taylor. Now, he’s missed three games, and the outlook on his future as a fantasy RB option in Week 11 is unclear. Joe Mixon was last revealed to be doubtful with a lingering foot injury on Friday.

Saturday, November 14: Joe Mixon was officially ruled out for the Steelers game on Saturday, per NFL insider Adam Schefter. There is some relevance in the distinction that the Bengals ruled him out a day early, rather than making him a game-time decision. We’ll keep you updated on Joe Mixon’s recovery through the ramp-up to Week 11.

Is Chris Carson on his way to return for the Seattle Seahawks in Week 11?

Chris Carson has missed three games now with a foot sprain, and in games without Carson, the Seahawks are 1-2. Correlation does not equal causation, especially when talking about running backs, but Carson’s dependable style is no doubt valued for a playoff-caliber Seahawks squad.

Sunday, November 15: Chris Carson was expectedly ruled out for Seattle’s Week 10 matchup with the Rams after serving as a non-participant in practices throughout the week.

Seattle’s next game — a Thursday night battle with Arizona — comes off a short week, so Chris Carson won’t have as much time to keep his recovery going. Thus, there is some skepticism that he’ll be back in time for this one. We will keep you updated with official statements on his status.

Will David Montgomery reclaim his heavy volume in Chicago’s offense in Week 11?

David Montgomery, while unspectacular, has been a very consistent player this season in terms of his availability. He’s logged ten carries or more in every game so far, but that streak will end in Week 10, as Montgomery has been ruled out for Chicago’s Monday Night Football matchup against the Vikings. Relevant updates on Montgomery’s status should be available later in the week, but once he returns, he’ll no doubt pick up his sizable volume again.

Sunday, November 15: Rookie RB Anthony McFarland was officially ruled out due to illness on Sunday.

Sunday, November 15: Chris Thompson ended up clearing concussion protocol and suited up for Jacksonville’s Week 10 showdown against the Packers, but he left the game after only one drive and was again evaluated for a concussion. James Robinson received all 23 carries for the Jaguars offense.

Sunday, November 15: Jalen Richard left Sunday’s game between the Raiders and Broncos with a chest injury, but X-Rays after the game were negative for any break or fracture.

Sunday, November 15: Mark Ingram was listed as an injured player with an ankle issue early on in Week 10, but he worked his way back by the weekend and was active for Sunday’s late-night clash against the Patriots.

Sunday, November 15: Matt Breida was labeled as inactive in Week 10 after also missing Miami’s Week 9 win over the Arizona Cardinals. Given that Breida was questionable in Week 10, he could end up being an available fantasy RB in Week 11, although his impact may be diluted with Salvon Ahmed playing well.

Sunday, November 15: T.J. Yeldon was a healthy scratch for the Buffalo Bills in Week 10 against the Arizona Cardinals. With Devin Singletary and Zack Moss providing a suitable two-headed rushing attack, Buffalo hasn’t had much of a need for Yeldon’s services.

Sunday, November 15: Troymaine Pope was listed as active for the Chargers’ loss to the Dolphins on Sunday, but he did not see any significant playing time on offense.

Wednesday, November 18: Kamara is listed as questionable and was not present at the portion of Friday’s practice open to the media, Nick Underhill of NewOrleans.Football reports.

Sunday, November 15: The Rams game would have been an opportunity for Carlos Hyde, given Chris Carson’s injury status, but Hyde himself has also been out for a few weeks with a hamstring injury, and he was ruled out on Sunday as well.

Wednesday, November 18: Elliott’s hamstring feels better after a bye week, but he did acknowledge Wednesday that it’s still a little tight, Michael Gehlken of The Dallas Morning News reports. “It’s a little stiff,” Elliott said. “It’s something that I’m working on every day.”

Sunday, November 15: JaMycal Hasty left San Francisco’s game against the Saints on Sunday with a significant injury. It was revealed by Kyle Shanahan post-game that Hasty had suffered a broken collarbone. His season is likely over.

Sunday, November 15: Despite coming into the weekend questionable with a stinger, Jerick McKinnon played and also shouldered a sizable workload, taking 18 carries. With no injury updates, McKinnon should be cleared to continue being an important piece of the 49ers offense.

Sunday, November 15: Kenyan Drake missed the Dolphins game in Week 9 with an ankle injury, but despite maintaining a “limited” status throughout the preparation for Week 10, he suited up and logged 16 carries for 100 yards in Arizona’s last-second win over the Bills. Drake’s status is safe heading into Week 11 and his injury should be behind him.

Sunday, November 15: After missing two games with a knee injury, Miles Sanders got the green light on Sunday against the Giants and logged 15 carries for 85 yards. He should be a full-go moving forward.

Sunday, November 15: Tevin Coleman has struggled to stay on the field this year, and Week 10 was an extension of that, as he was ruled out with a knee injury. With JaMycal Hasty out for the year, Coleman could be in line for a bigger rotational role at some point, but it remains to be seen when Coleman can become available. He has not been placed on injured reserve.

Sunday, November 15: Seahawks complimentary running back Travis Homer suffered a hand injury against the Los Angeles Rams in Week 10. His status is up in the air for Week 11.

Sunday, November 15: Tyler Ervin was ruled out for the Packers’ Week 10 contest against the Jacksonville Jaguars with a rib injury.