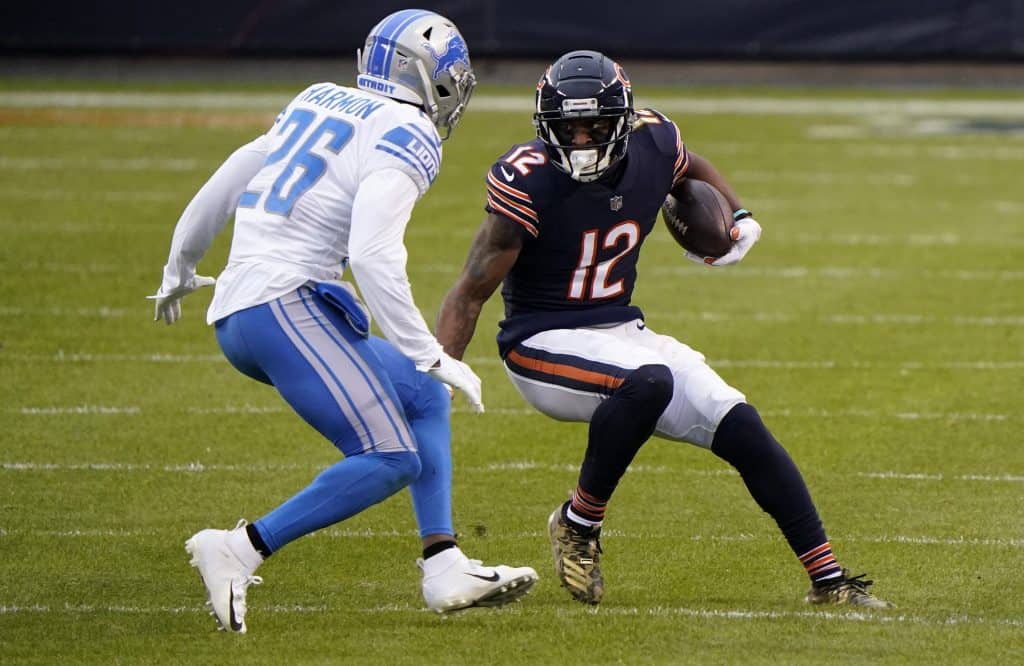 In a loaded wide receiver free agency class, Chicago Bears WR Allen Robinson is arguably the best one of the group searching for a new landing spot. After failing to secure a long-term deal, the Bears are faced with two options. Watch Allen Robinson take his incredible talent to another landing spot or block him from hitting NFL free agency with a franchise tag.

As WR Allen Robinson looks towards free agency, the Bears could lose one of the best talents in the NFL

The fact we have even reached this juncture is a massive failure on the part of the Chicago Bears. Rarely do you see a team almost daring a player with WR Allen Robinson’s talent to test free agency and begin the process of finding a new landing spot.

For my money, you will not find a more underappreciated WR in the NFL than Allen Robinson. He is elite in every sense of the word, yet for some reason, does not get the respect he deserves.

Since his 2015 sophomore campaign, Robinson has averaged 68 receptions on 117 targets for 908 yards and 6 touchdowns if you look at his yearly average. That is including a 2017 campaign where he didn’t complete a game due to tearing his ACL in Week 1.

Take that out, and Allen Robinson averages 140.2 targets, 81.6 receptions, 1,086 yards, and 7.4 touchdowns. He has done all of that while catching passes from Blake Bortles, Chad Henne, Mitch Trubisky, and Nick Foles.

He finished sixth in receptions with 102. Robinson saw the third-highest number of targets at 151, which accounted for 25% of the Bears’ total and was 40.5% of the wide receivers’ total targets. He was ninth in yards with 1,250, and his 102 receptions marked him as just one of six wide receivers to surpass 100 receptions.

Due to lost revenue of the 2020 season, the NFL salary cap took a massive hit. While it has yet to be nailed down, current estimations have the salary cap around the $185.5 million range. Earlier in the year, the NFL and NFLPA agreed on a floor of $180 million, but there is a chance we see it creep closer to $190 million. Even with less than 24 hours until the “deadline,” there has been no word on the salary cap in 2021.

As for someone like Bears’ WR Allen Robinson, his average annual value could be the highest of this free agency class at WR. Spotrac has his market value estimated at $20 million over a four-year, $80.208 million contract.

The real question would be, are the Bears willing to let WR Allen Robinson hit the open market and test free agency?

If he hits free agency, where are potential landing spots for Bears’ WR Allen Robinson in 2021?

While I might only list a handful, quite frankly, 31 teams need to take an in-depth look to see if it is possible to sign Allen Robinson in free agency. He makes every team better.

Could the Chicago Bears keep WR Allen Robinson from pursuing a new landing spot by tagging him?

If Chicago wants to keep Robinson around in 2021, this is likely the only option. Especially considering the Bears are projected to be $2.82 million over the cap, according to Spotrac. Sure they could find wiggle room to free up a few million, but the franchise tag would cost the team $16.43 million on the one-year deal.

The Bears could also look into a transition tag or a non-exclusive franchise tag. With an EFA, the team signing him must send two first-round picks to the team that tagged the player.

They have the cap space, without a doubt. The Colts have the fourth-most projected cap to work with at $62.31 million in 2021.

Also, Indianapolis needs wide receiver depth. T.Y. Hilton is aging and is also going to be a free agent. From there, it is 2019 draft pick Parris Campbell who missed all of 2020 with a knee injury, and Michael Pittman Jr. Yes, they love Pittman, but he isn’t a number one option. Allen Robinson, though, is as elite as they come.

After trading for Carson Wentz, they need to give him weapons for him to succeed. Bringing on Allen Robinson in free agency would be a perfect fit for 2021 and beyond.

Washington has Terry McLaurin and then a bunch of question marks at receiver. No one is sure what Antonio Gandy-Golden will be after missing a season that puts him behind the 8-ball in development.

Washington has a phenomenal defense that was good enough to get them into the playoffs and needs an offense that can keep up. Pairing Allen Robinson with Terry McLaurin would give Washington one of the scariest 1-2 punches in the NFL. Sitting with the fourth-most projected cap space ($58.787 million), WFT is positioned to make a run on Allen Robinson as his next landing spot.

Could the Philadelphia Eagles be a potential landing spot for Allen Robinson?

The Eagles’ passing game needs a lot of help in 2021. According to a report from Chris Mortenson, Eagles’ owner Jeffrey Lurie is on board with trusting Jalen Hurts at QB after trading Carson Wentz, but who will he throw to next season?

The Eagles have been consistently tied to some of the best WR options in the draft with their sixth overall pick. In my most recent mock, I had them selecting the best all-around athlete in the draft in Kyle Pitts.

If they bring in Bears WR Allen Robinson in free agency, this gives them flexibility with their first-round pick. Also, they can move their 2020 selection, Jalen Reagor, into a more natural fit for his game rather than the “X.”

Could Allen Robinson choose a reunion with the Jacksonville Jaguars as a landing spot in free agency?

Imagine if Allen Robinson went back to the team that drafted him in 2014. Most importantly, he would be catching passes from likely first overall pick Trevor Lawrence instead of Blake Bortles and Chad Henne.

The Jaguars will be a trendy pick for WR landing spots as they are a franchise needing perimeter help. They’re also in the middle of a culture change with Urban Meyer now at the helm.

Jacksonville has the most cap space in the NFL at $85.668 million and will be active in the WR market. Pairing up Allen Robinson in free agency with DJ Chark and Laviska Shenault gives the Jaguars three legitimate receiving threats.