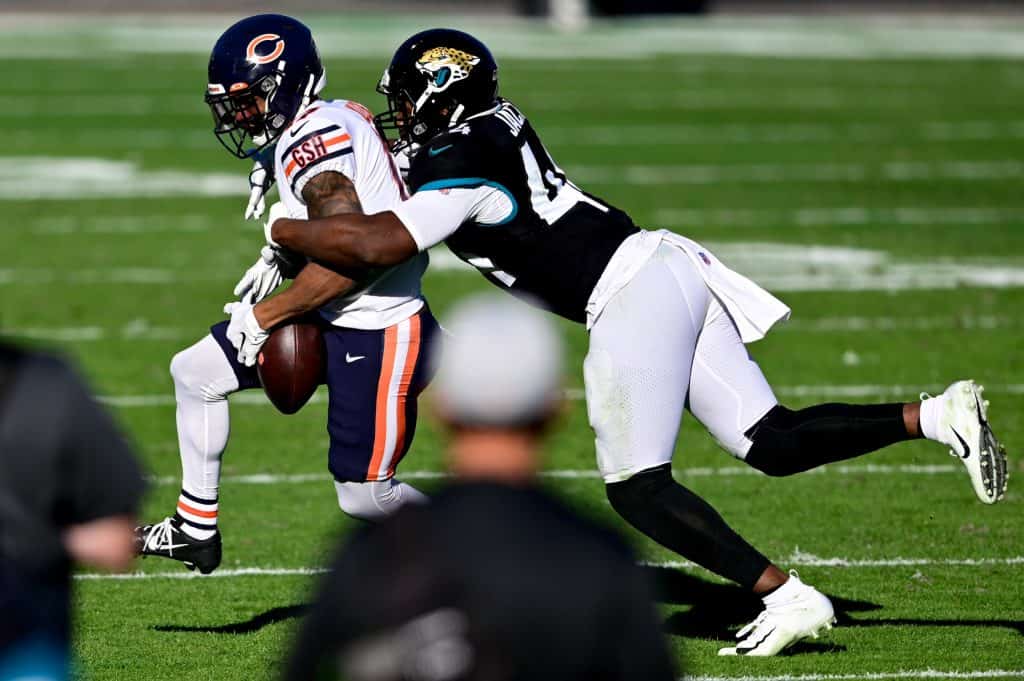 Dec 27, 2020; Jacksonville, Florida, USA; Chicago Bears wide receiver Anthony Miller (17) makes a reception against Jacksonville Jaguars linebacker Myles Jack (44) during the second half at TIAA Bank Field. Mandatory Credit: Douglas DeFelice-USA TODAY Sports
What's in this article? Click to show
The Jaguars project to be around $83 million under the salary cap in 2021
The Jaguars have little need to release players to create salary cap space
The Jaguars have players they may consider extending in 2021
Want more NFL news and analysis?

After an embarrassing season in 2020, what is the salary cap situation for the Jacksonville Jaguars entering the 2021 NFL league year? Let’s take a look at the Jaguars’ salary cap situation, as well as which players they could release, restructure, or extend to create additional salary cap space in 2021.

As it stands, the Jaguars have just under $117.6 million in commitments to their top 51 highest-paid players, with $6.9 million assigned to the retired Rodney Gunter, and an additional $1.4 million in dead money. As such, the Jaguars are currently around $82.7 million under the salary cap heading into 2021.

Kicker Josh Lambo will enter the third year of his four-year contract extension. Lambo expects to count $4.4 million against the Jaguars’ salary cap in 2021. Releasing him could see the Jaguars save $2.6 million. Lambo played in just four games in 2020, making all five field goals and 8 of his 10 extra points. Lambo is a valuable kicker, but it wouldn’t be a surprise to see the Jaguars make him compete for his spot on the roster in camp this year.

The Jaguars have players they may consider extending in 2021

The Jaguars could extend a few priority players this offseason with their surplus. They have the luxury of being able to do so without worrying about a tight budget. Therefore, Urban Meyer and the front office can make their decisions and ensure the players they want are handled correctly.

Could Brandon Linder and A.J. Cann get extensions?

The Jaguars may decide to address their offensive line from an extension standpoint. Assuming the team does not decide to move on from Cann, they may consider extending him to ensure consistency on the offensive line going forward.

It could be the same situation for Brandon Linder, who has two years left on his deal. The Jaguars center is set to earn $8.6 million in 2021 and then $10 million in 2022. However, the Jaguars will likely wait to see how he gels with their No. 1 selection before making a decision.

The Jaguars’ first-round selection from 2018, Taven Bryan, is a player the front office needs to decide on. They could take up his fifth-year option and buy more time. Bryan has played 45.6 percent of the Jaguars’ snaps in the last two years, and his numbers do not present an exciting option.

Releasing him is probably not worth it, with just $1.6 million in salary cap savings. Therefore, look for the Jaguars to potentially decline his fifth-year option and let him hit free agency in 2022.

In contrast, D.J. Chark currently counts $2.5 million against the Jaguars’ salary cap in 2021. Inconsistent QB play meant he struggled in 2020, but he is a talented receiver who could be an ideal extension candidate this offseason.