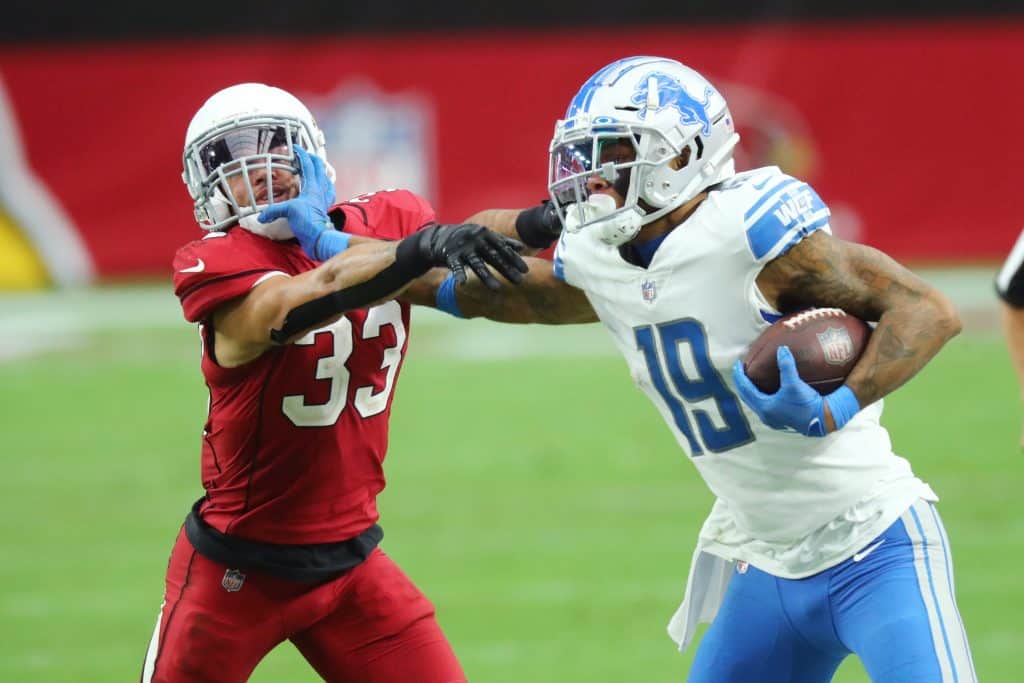 If a team requires a game-changing wide receiver, this is the free agency class to find one. Sitting towards the top of the list is Detroit Lions WR Kenny Golladay, who will be looking for a new landing spot. The Lions have chosen not to franchise tag Golladay, and he should have no shortage of potential NFL teams calling.

As he looks for new landing spots, Kenny Golladay has all the skills needed to lead a team

When on the field, Kenny Golladay has shown the skills to be a top receiving option in the NFL. While his rookie season was quiet, this was expected, as most WRs are their first season in the NFL. Golladay had 28 receptions for 477 yards and 4 touchdowns on 48 targets in his 11 games played.

In 2018, under new head coach Matt Patricia, Kenny Golladay quickly turned into Matthew Stafford’s favorite target. He caught 70 of 119 targets for 1,063 yards and 5 touchdowns in 15 games. Golladay’s success continued into Year 3 with the team. He set a new career-high in yards with 1,190 yards, catching 65 of 116 targets for an NFL-leading 11 touchdowns.

With free agency on the horizon, many expected Kenny Golladay to progress even further into the elite ranks of the NFL. Those expectations were quickly dashed, however, with injuries in 2020.

Golladay struggled to stay on the field with free agency looming

To say the 2020 season had been a disappointment for Kenny Golladay would be an understatement. Golladay came into the season with high expectations that he would continue his upward trajectory. He was coming off back-to-back 1,000-yard seasons and put up 11 touchdowns. It’s even more impressive when you remember it was David Blough and Jeff Driskel under center the year prior.

Golladay missed the first two games of the season due to a hamstring injury he suffered in the condensed training camp. He managed to come back, only to suffer a hip injury on November 1 that ended up being enough to keep him off the field. Golladay only played in five games, recording 20 catches on 32 targets for 338 yards and 2 touchdowns. Until last season, Golladay had played in 11, 15, and 16 games since coming into the NFL.

Lions WR Kenny Golladay is a large-framed WR (6’4″) who brings the size you want in an “X” but gets the volume of a slot receiver (117.5 avg in 2018-2019). Kenny Golladay is primed for a bounce-back and will have numerous potential landing spots to choose from in free agency.

Due to lost revenue of the 2020 season, the NFL salary cap in 2021 has seen a massive drop. While it has yet to be agreed on, current estimations have the salary cap around the $185.5 million range. Earlier in the year, the NFL and NFLPA agreed on a floor of $180 million, but there’s a chance we see it creep closer to $190 million.

Thus, teams will have to make difficult decisions regarding veterans and how bullish they can be in free agency. Will this keep new landing spots from giving out large contracts to sign free-agent WRs?

As for someone like Lions WR Kenny Golladay, while he might not see the highest AAV, his overall contract could be one of the largest for a WR. Spotrac has his market value estimated at $17 million over a five-year, $85 million contract. If this does happen, Kenny Golladay would be a top-five highest-paid wide receiver in the NFL.

Where are potential landing spots for Kenny Golladay in 2021?

For a team as good and as competitive as the Ravens are, they have no real passing game. Yes, Marquise Brown’s end-of-season numbers look good, but that mostly came in the last few games. Also, they lack any real size in the red zone outside of TE Mark Andrews.

If the Ravens can lure Kenny Golladay in free agency, they can bolster their WR spot and get a player who is seven inches taller than their current WR1.

The New England Patriots have the worst skill group in the NFL right now. I don’t think it is that close. N’Keal Harry has been a bust, and Julian Edleman is 34 and dealing with injuries. In 2020, their top WR was a UDFA from NC State (Jakobi Meyers).

The Patriots desperately need help at receiver to retake the crown from the Buffalo Bills. Sitting with the third-most cap space ($72.619 million), the offense needs a complete overhaul.

If Kenny Golladay does choose New England as the landing spot, he would instantly be the favorite target of whoever is under center. The big question is would Kenny Golladay want to reunite with Matt Patricia?

Could the Philadelphia Eagles be a potential landing spot for Kenny Golladay?

The Eagles passing game needs a lot of help in 2021. While it seems they are content trusting Jalen Hurts at QB after trading Carson Wentz, who will he throw to next season? The Eagles have been consistently tied to some of the best WR options in the draft with their sixth overall pick. In my most recent mock, I had them selecting the best overall athlete in the draft in Kyle Pitts.

If they bring in Lions WR Kenny Golladay in free agency, this gives them flexibility with their first-round pick. Also, they can move 2020 pick, Jalen Reagor, back to the “Z” or slot.