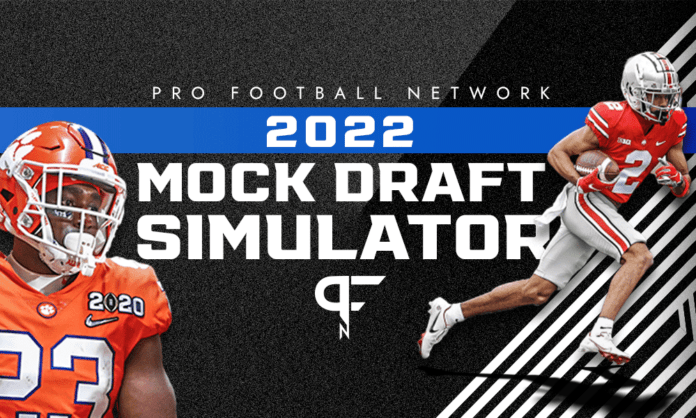 PFN's Mock Draft Simulator is back with another 2022 NFL Mock Draft. What goes down in our latest simulation, and which teams win big?

Robots are entering the workforce. It’s a great innovation, don’t get me wrong. I’m all about efficiency and reducing overhead, etc. But I was recently asked to write up a 2022 NFL Draft mock — done by Kent Lee Platte’s amazing PFN Mock Draft Simulator. Now, Kent’s my guy. Great mind, great mustache. But what can a simulator do that I can’t?

If the MDS is so much better at making picks than human beings, let’s see what selections it’s made in this 2022 NFL Mock Draft. This had better be terrible.

Wow, so creative. Thanks, MDS. Who would have ever thought of picking Kayvon Thibodeaux first overall? You’re really going against the grain. Great job. Thibodeaux’s elite combination of length, explosiveness, flexibility, and power is definitely slept on.

Again, so inspired. The team that needs protection for its franchise quarterback Trevor Lawrence gets protection for said quarterback. Who would’ve thought? Do I dispute the fit? No, I don’t. Evan Neal is a fantastic athlete who’s shown growth this year. But this selection feels almost robotic. I wonder why.

Meh. I would’ve liked to see something more creative here. And no, I’m not just salty because the MDS is making good picks. I don’t know why you’d think that. I will concede this: The Jets have a barren cornerback room, and Derek Stingley Jr. is a top-flight athlete with blue-chip potential. So, I guess, score one for the MDS. I’m not getting my hopes up, though.

Aha! The first slip-up of the MDS. Spencer Rattler entered the season as QB1, sure. But how could you pick him first now, when both Matt Corral and Malik Willis have closed the gap? Maybe it’s because the MDS is incapable of logic and reason. Or maybe … it’s because the MDS is immune to recency bias, an imperfection that humans are eternally cursed with.

Sorry, having a short existential crisis — moving on.

There are very few selections that wouldn’t make sense for the Falcons here, so I’m going to cut the MDS some slack on this one. Atlanta needs a lot of help, and starting on the edge is a sensible move. Drake Jackson has a lot of upside with his explosiveness, flexibility, and ingrained power.

This one makes sense, too. I’m not certain the Giants would trade with their NFC East rivals, but there’s no doubting that the Washington Football Team should be aggressive in securing its franchise quarterback. Although Taylor Heinicke has had his moments, Sam Howell provides more upside, with the same resonant toughness and clutch mentality.

A lot depends on whether or not Jessie Bates gets extended long-term by the Cincinnati Bengals. But if that doesn’t happen, this 2022 NFL Mock Draft selection would be a great outcome for Zac Taylor’s squad. Kyle Hamilton is ranked as PFN’s top player in the class. With an inhuman combination of size, athleticism, and closing quickness, he can be an offensive eraser.

Okay, so the MDS knows that the Giants need offensive line help. Big deal. Anyone could’ve figured that out. I won’t deny the merit of the pick, though. Tyler Linderbaum is the best center in the class, hands down. He’s smart, athletic, surprisingly powerful for his frame, and well attuned to leverage in the trenches.

This feels like pandering from the MDS. I’m not buying it, but I’ll accept the nod for my guy Kaiir Elam. Elam is an excellent cornerback prospect who isn’t as far separated from Stingley and Andrew Booth Jr. as the hype would imply. He has outrageous hip fluidity for his 6’2″ frame, and he also has great ball skills and physicality.

Just as the Giants need help on the offensive line, they could also use a boost on the defensive front. Their interior line is great, but on the edge, Azeez Ojulari is still growing. Additionally, things are a little light across from him. George Karlaftis can literally and figuratively help with that lightness. Karlaftis is 6’4″, 275 pounds, but he has the athleticism to play standing up and the power to drive open rushing lanes.

Okay, MDS, perhaps I underestimated you. Perhaps you are an entity of culture. Sean Rhyan isn’t always lumped in with the top tackles in this 2022 NFL Mock Draft, but he should be. He’s a powerful, athletic mauler who’s been a key driving force in UCLA’s success this year. He can fix the Colts’ problems on the line.

This is interesting, but I kind of like it. I was a fan of Jordan Battle this past offseason. From my evaluation, he’s a well-sized safety with good athleticism, instincts, and recognition ability. He still needs to make more plays on the ball, but he’s flashed that playmaking ability before. He could eventually carry the torch for Harrison Smith in Minnesota’s secondary.

Three first-round receivers in a row? I don’t know if I see that happening, but if Jalen Hurts shows something down the stretch, it’s not out of the question that the Eagles decide to roll with him and add to his receiving corps. Chris Olave provides a nice dynamic alongside DeVonta Smith and Jalen Reagor. His speed and smoothness could be a big help.

I don’t agree with passing over a quarterback here. Ben Roethlisberger is clearly cooked, and the Steelers need to get a successor this offseason. But if they can get a high-upside signal-caller in Round 2, Ahmad Gardner is a great fit in Round 1. He has the length, closing burst, and awareness that the Steelers look for in their cornerbacks.

If this happens, the rest of the NFC South may have to file an injunction against the Carolina Panthers. It’s not right for one offense to be this explosive. Christian McCaffrey, DJ Moore, Robby Anderson, Terrace Marshall Jr., and Garrett Wilson? If Joe Brady is still there, they’ll break the season yardage record.

I won’t give the MDS any shade here. I’ve personally made this pick probably three times since the start of the offseason. The Raiders’ defense has been better than expected this year, but the interior defensive line still needs more help. In this 2022 NFL Mock Draft, DeMarvin Leal is the best player available at a prime position of need.