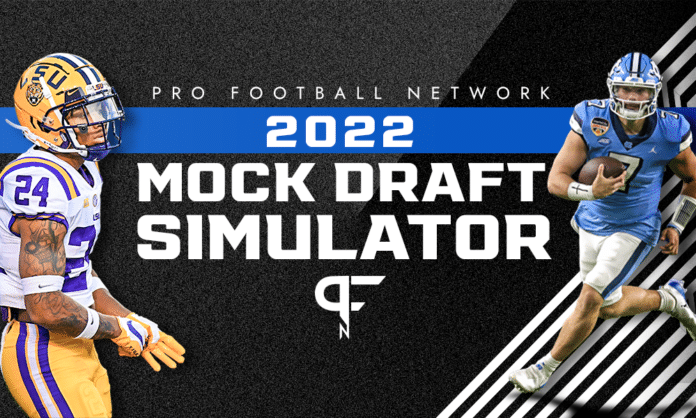 2022 NFL Mock Draft: Five wide receivers go off the board in Round 1

Five wide receivers break into Round 1 in this 2022 NFL Mock Draft, including a vaunted Ohio State duo and a Mountain West standout.

Who makes the Round 1 cut? Defense dominates this half, but a few teams also make major moves on the offensive side of the ball.

The Patriots’ defense is always one of the more intriguing units in the league, largely because of its three-level versatility and how Bill Belichick utilizes his players. There won’t be much versatility from Zach Harrison, but Belichick could use more traditional edge rushers who can provide steady value rushing the passer. With his combination of straight-line explosiveness and length, Harrison has truly devastating potential.

The Mock Draft Simulator isn’t ready to give up on Big Ben. But, in fairness, if DeMarvin Leal were available at No. 18, I’d consider making this pick too. Leal is a top-five prospect on our Top 50 Big Board. At 6’4″, 290 pounds, he sports outstanding length, athleticism, and versatility across the line. Thinking about what he, Cameron Heyward, T.J. Watt, and Stephon Tuitt could accomplish together is scary.

Zach Ertz and Dallas Goedert are both set to be free agents next year. Ertz likely isn’t coming back, and while his departure frees up money for Goedert, the new regime makes things somewhat unpredictable. Regardless, there’s going to be change — Jalen Wydermyer helps to combat that. Wydermyer has been one of the Aggies’ best weapons since his freshman year and QB Haynes King will go to him often.

The MDS liked Teddy Bridgewater’s work in 2021 enough to trade back from No. 10 overall. The Saints moved up, while the Broncos slid back to No. 20. They added picks and also acquired a new catalyst on the edge. Myjai Sanders is an ascending pass rusher with an exceptional mix of explosiveness, length, instincts, and bend capacity. Ideally, Von Miller returns for at least another year so that he can coach Sanders up.

Dan Quinn may be just what the doctor ordered for the Dallas Cowboys. Furthermore, the team seems to have compiled a steady core of young talent. Things should get better as that young talent continues to grow, but they could still use more in their pass-rushing rotation. Kingsley Enagbare adds a lot of upside and provides a nice contrast to Chauncey Golston. While Golston is a long-limbed barrier, Enagbare is a twitchy, energetic pass rusher.

No one has run away with the Tennessee Titans’ right tackle job. There’s a chance Dillon Radunz could start to earn confidence throughout the season. Nevertheless, there’s uncertainty there, and Radunz could ultimately slide inside to guard at some point. Rasheed Walker provides more security for the Titans at the very least. He’s a large, athletic blocker with great length and awareness at multiple levels.

There are only two trades in this 2022 NFL Mock Draft. The first one occurred between the Saints and the Broncos, and the second is between the Packers and Jets. Assuming Jordan Love will take the reigns from Aaron Rodgers in 2022, the Packers will finally be proactive in giving him weapons. Treylon Burks is a tremendous size/speed threat for Arkansas, and his multi-level dynamic ability would give Love a lot more to work with.

The Colts’ left tackle situation hasn’t improved since we last checked in on them. Sam Tevi recently tore his ACL and is out for the year. Eric Fisher has been isolated with COVID-19. That leaves Julie’n Davenport and Will Holden, who has eight starts since 2017. It’s safe to say the Colts could draft another tackle. Charles Cross gives them a high-upside contributor with great length and technical promise for his age.

Assuming Tua Tagovailoa makes the most of a fully healthy Year 2, the Miami Dolphins will be a team with relatively few needs entering the 2022 offseason. They could opt to bolster one of their more important positions, or they could get a bonafide top option in their running back room. In this 2022 NFL Mock Draft, the MDS chose door No. 2. Isaiah Spiller has great size and tenacity, but he’s also an explosive lateral athlete.

Malik McDowell’s emergence in the preseason has been a pleasant surprise for the Browns. However, Cleveland may need more rotational depth on the interior when the 2022 offseason rolls around. By that time, Perrion Winfrey may have played to his Round 1 potential. The Oklahoma standout offers great twitch and energy for his size. He has a true three-down skill set — a valued commodity in the modern NFL.

The Bills drafted Damar Hamlin in the 2021 NFL Draft, beefing up their safety room behind Jordan Poyer and Micah Hyde. While Hamlin has some upside, the Bills may crave more long-term potential after the season. Jordan Battle should provide that for Sean McDermott and Co. Battle has excellent size and athleticism, but his mental traits may be more impressive. He recognizes plays well and is trending up in 2021.

Remember how much we talked about the Lions’ receiving corps having no weapons? Well, they have even less after the release of Breshad Perriman. It goes without saying that the Lions need much, much more help. Nevada’s Romeo Doubs is a tremendously explosive and twitchy athlete composed within a long 6’2″, 200-pound frame. If he can string together some loose ends, his upside is immense.

The Ravens invested capital in their secondary when they selected Brandon Stephens in Round 3 last April. But in this 2022 NFL Mock Draft, they’re not done. Ahmad Gardner has great zone potential with his length and explosiveness, but he also has enough fluidity to hold his own in man. Gardner’s presence on the boundary would allow Marlon Humphrey even more flexibility between the outside and the slot.

The Jets’ woes on the edge have been well-documented this offseason. Robert Saleh’s squad lost free-agent addition Carl Lawson for the season to an Achilles injury. They did trade for Texans edge rusher Shaq Lawson, but they’ll need much more talent in their rotation in 2022. In this 2022 NFL Mock Draft, the Jets trade back and still land Aidan Hutchinson, a high-motor player with impressive length and underrated athleticism.

This is an interesting pick from the MDS, especially considering the early success of 2020 rookie Antoine Winfield Jr. Nonetheless, teams can never use enough talent in the secondary, and Brandon Joseph provides an interesting contrast. He brings better size than Winfield while offering the same instincts and playmaking potential in coverage situations. Joseph will need to fill out his frame, but he’ll be tough to throw against.

No matter how the draft board plays out, the Chiefs always seem like winners. That may be partly due to the Chiefs’ current roster solidity, but the fact remains — Kansas City knows how to play the board. Andrew Booth Jr. is the pick here. It’s unlikely he will last this long with his physical tools if he reaches his full potential. Booth is long, explosive, twitchy, and fiery as a competitor. He needs more consistency, but 2021 can be a proving ground for him.