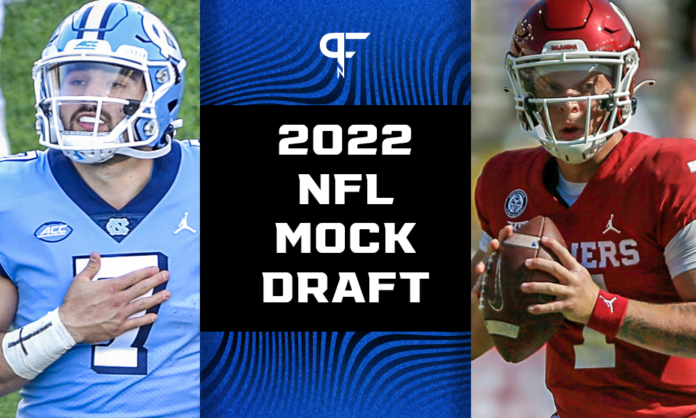 With the college football season around the corner, this 2022 NFL Mock Draft offers players with immense potential to keep an eye on.

The first half of this 2022 NFL Mock Draft is in the books, and as one Captain America said to the other, “I can do this all day.”

Just a few picks after his Ohio State running mate, Chris Olave comes off the board. Mac Jones has torn up the preseason, and all reports point to more of the same at practices. Cam Newton’s days in New England may be numbered, but whoever is under center next year will benefit from Olave’s route-running and long speed. With Nelson Agholor, Jakobi Meyers, and Kendrick Bourne highlighting the Patriots’ wide receivers, Olave would instantly become WR1.

The “Pancake King,” Ikem Ekwonu’s highlight reel is astonishing. Although his pass protection skills are lacking at this point, he is a destroyer of worlds in the ground game. Ekwonu pops on contact and plays with terrific leverage. If he can get his hands and feet moving in unison and progress his pass-blocking ability, he would be the key to a rebuilding Pittsburgh offensive line.

Kenyon Green has played guard for Texas A&M the last two years, but he will kick out to tackle in 2021. And that will be where he stays in the NFL, thanks to his ability in space. Green needs to prove he is technically proficient enough to earn a first-round grade at tackle, but the physicals are unmatched.

Speaking of unmatched physicals — enter Treylon Burks. The Razorbacks WR is rocked up at 6’3″ and 225 pounds. He is a YAC machine with the frame to be a red-zone threat. Although his size screams outside receiver, Arkansas has solely lined him up in the slot. While he can thrive there in the pros, I want to see what he can do on the outside as an “X” before he enters the draft.

The Greek Giant is 6’4″ and 275 pounds and plays like it. As a true freshman in 2019, George Karlaftis bullied every man across from him. Injuries limited his production in three games last year, but a healthy Karlaftis is a scary one. His playstyle works better on the inside and that may be where he sticks in the NFL.

Many Group of Five prospects get knocked for their level of competition, but Myjai Sanders silenced naysayers with an impressive outing against Georgia in the Peach Bowl. His length is awe-inspiring, but he can improve in his use of it this season.

Zach Wilson has a solid receiving corps to throw to, with Corey Davis and Elijah Moore leading the way for the next few years. But the Jets franchise QB needs a safety blanket, and Jalen Wydermyer offers that and then some. He doesn’t flash in any specific area, but he just produces as a receiver and blocker. That consistency will have NFL decision-makers sprinting their cards up in Vegas.

Zion Nelson has improved tremendously since 2019, when he didn’t even look like a D1 offensive tackle. Nelson has the athleticism and pass-set depth to be a first-round OT, but he needs to add muscle to endure bull rushes from NFL edge rushers.

What is Nakobe Dean‘s secret to disrupting opposing offenses? Bruce Banner said it best, “That’s my secret, Captain. I’m always angry.” Dean flies all over the field, crushing anyone that gets in his way. He may be “undersized” at 6’0″ and 225 pounds, but Dean possesses an every-down skill set in today’s NFL.

Myles Garrett needs a permanent partner in crime on the edge. Jadeveon Clowney is a nice stop-gap, but Drake Jackson could be what Garrett has been longing for. While Garrett powers his way to the QB on one end, Jackson can also use his athleticism to secure the sack.

The Bills finally get an elite cornerback to pair with Tre’Davious White in this 2022 NFL Mock Draft. Trent McDuffie has nothing left to prove. He is spectacular against the run, a sure-tackler, and holds his own on the outside. White and McDuffie would instantly form the best zone-corner duo in the NFL.

George Pickens owns the height/weight/speed combination that had him in early 2022 NFL Draft class WR1 conversations before tearing his ACL. He is a natural receiver with an uncoachable feel for the game. Pickens has no issue creating separation and releasing off the line, especially if he can pack on a few more pounds of muscle.

Here is a prospect who has been gaining traction in the draft community lately — and I am buying in. Northern Iowa just had OT Spencer Brown selected in Round 3 of the 2021 NFL Draft by the Buffalo Bills. But I believe Penning is the far better player. At 6’7″ and 320 pounds, he is a people mover. He has no issue moving men against their will.

He possesses excellent length and is agile for his size. He will likely need a strong showing at the Senior Bowl, but I have no doubt he will deliver.

When you are a receiver at Alabama, you are expected to be great, and John Metchie III fits the billing. He won’t wow you with contested catches or by making people miss after the catch, but Metchie just gets open. His route running and head for the game are a step above the competition, even in the SEC.

Tyler Linderbaum is a former wrestler and defensive tackle, and it shows. He lines up and wants to demolish whoever is across from him. Linderbaum has his opposition going to the sidelines saying, “Coach, I don’t feel so good.”  Moreover, he quickly launches his hands into defenders’ chests and is outstanding in space.

Ahmad “Sauce” Gardner is a press-man corner. Period. His slim frame has held up thus far, but he will need to add muscle to maintain his style of play in the NFL — which he seems to have done this offseason. While I would love to give the Chiefs another weapon for their arsenal, they need to address their secondary.