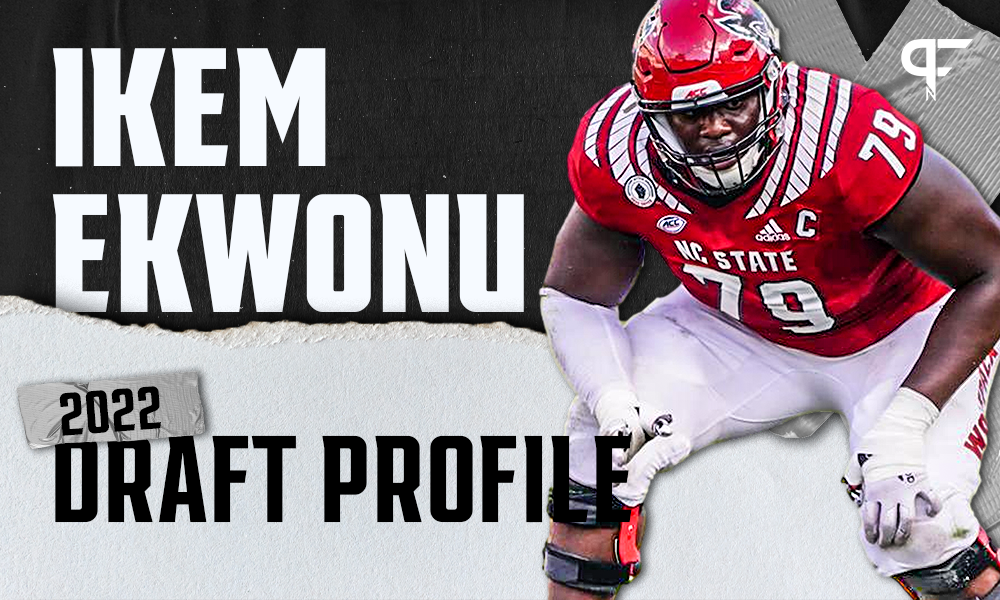 His name translates as “my effort will not go in vain,” and he’s been described as “the most feared lineman in the ACC” ahead of this college football season. But don’t be fooled by his smiling, bespectacled, off-field demeanor — North Carolina State offensive guard Ikem Ekwonu is a violent game-changer who is one of the best interior offensive linemen in the 2022 NFL Draft class. So does he have the potential to be a first-round pick next spring? Let’s examine his scouting report to find out!

Although he may not be considered a household name just yet, Ekwonu is making waves in the scouting community and the NC State OG’s scouting report details why.

There is a reason why he’s been labeled “the most feared lineman in the ACC.” One of the critical components of player evaluation is ascertaining competitive toughness, and Ekwonu has enough to fuel three players. He looks to finish every play devastatingly, and more often than not, he is successful with dramatic consequences. There were multiple examples in the games studied — North Carolina, Miami, Wake Forest, and Duke — but one play where he shows blatant disregard for Hurricanes safety Bubba Bolden sticks in mind the most.

Ekwonu is a good old-fashioned mauler who does his best work in the phone booth that is the interior offensive line. His high school wrestling experience is apparent in how he goes into combat as a run blocker. Furthermore, run blocking allows him to demonstrate impressive athletic tendencies. He can get out to the second level and routinely forces the issue downfield, as Bolden will attest.

In addition to the violence he brings in the ground game, Ekwonu demonstrates a vicious and powerful punch in pass protection.

Finally, having played both left tackle and left guard in his NC State career, Ekwonu provides valuable versatility. For me, he has the potential to be the Alijah Vera-Tucker of the 2022 NFL Draft class. By that, I mean he can probably play offensive tackle in the NFL. However, he is far more likely to have a successful career as a potentially exceptional guard at the next level.

The reasons that I foresee Ekwonu as a guard prospect in the 2022 NFL Draft show up in the areas for improvement section of his scouting report.

There’s no escaping that his ability in pass protection is behind his run-blocking prowess. He allowed 25 pressures and 7 sacks last season, which leaves some room for significant improvement. But, as much as statistical analysis shouldn’t be the basis for player evaluation, tape study shows some of the reasons why Ekwonu struggled in pass protection.

Despite having a powerful punch and extremely violent hands, he needs to be more consistent with his hand placement. Additionally, Ekownu needs also to show consistency with the timing of his punch. There were examples where he was too late getting his hands on his opponent, losing the rep before it even started.

Ekwonu also displayed examples of carrying his weight over his toes in pass protection. Thus, he can be guilty of lunging at his opponent, losing his balance, and ultimately losing the battle.

Although natural-born talent is somewhat of a myth, Ekwonu’s ascension to NFL Draft prospect is hardly surprising given his athletic heritage. His mother was a high school track star, while his father was a college basketball standout in Nigeria before coming to America. With such impressive influences close to home, it’s hardly surprising that both Ikem and Osita Ekwonu developed into sporting stars, with Osita being a linebacker at the University of Notre Dame.

Ikem excelled in multiple sports at Providence Day High School. Displaying incredible athleticism for his size, he held down the anchor leg of the high school relay team. Meanwhile, his strength and competitive nature allowed him to become an All-State wrestler. With wrestling prowess on his résumé, a role on the offensive line for the football team made perfect sense. As a result, he saw action at center as a high school freshman.

Although he saw some time playing time early in his high school career, Ekwonu emerged as having college football potential as a junior. He played both ways for Providence, securing 20 tackles and 4.5 sacks as a defensive lineman. Despite playing both ways, his ability to be dominant as an offensive lineman became apparent in his senior season. Ekwonu registered 28 knockdown blocks, earning first-team All-State and All-Conference honors.

At this point, the ascending offensive lineman already committed to NC State. A three-star recruit who ranked as just the 36th offensive guard in the 2019 class still garnered 15 offers. Those included Harvard and Yale — a testament to his intelligence on and off the field. However, NC State offered a perfect blend of athletics and academics.

While Ekwonu was impressed by NC State, head coach Dave Doeren had been even more impressed by his new OG. Doeren described the young offensive lineman’s high school performances as “one of the most impressive performances I’ve ever seen by a lineman.”

Ekwonu immediately translated his high school potential into results on the college level. Although he started the season at left guard, he became the first true freshman to start at left tackle for the program since 2010. He led the team with 37 pancakes, recording 7 in games against Louisville and Georgia Tech.

His ability was recognized both internally and outside of the NC State building. Ekwonu was named the Philip Rivers Rookie of the Year. Meanwhile, he was a co-recipient of the John Ritcher Offensive Lineman of the Year Award. Furthermore, he was named to the FWAA Freshman All-American team and received second-team All-ACC honors.

Despite the disruption of the 2020 college football season, Ekwonu showed no signs of a sophomore slump. Following a dominant performance against Duke, he was named the co-ACC Offensive Lineman of the Week. His statistical production was outstanding. Ekwonu totaled 50 pancake blocks and 22 knockdowns. As impressive as the output was, his ability to switch between OG and OT was awe-inspiring. As a result, he earned second-team All-ACC recognition at both positions.

Being “the most feared lineman in the ACC” is not hyperbole. Ekwonu’s ability and desire to finish a play with savagery are evident on every snap. Despite sitting behind Texas A&M’s Kenyon Green as the top guard in the 2022 NFL Draft class, Ekwonu should earn first-round consideration next April, becoming the first NC State interior offensive lineman to be drafted since Garrett Bradbury.

Want more 2022 NFL Draft prospect news? Want to do your own mock draft?

Oliver Hodgkinson is an NFL Draft Analyst for Pro Football Network. You can follow him on Twitter at @ojhodgkinson.