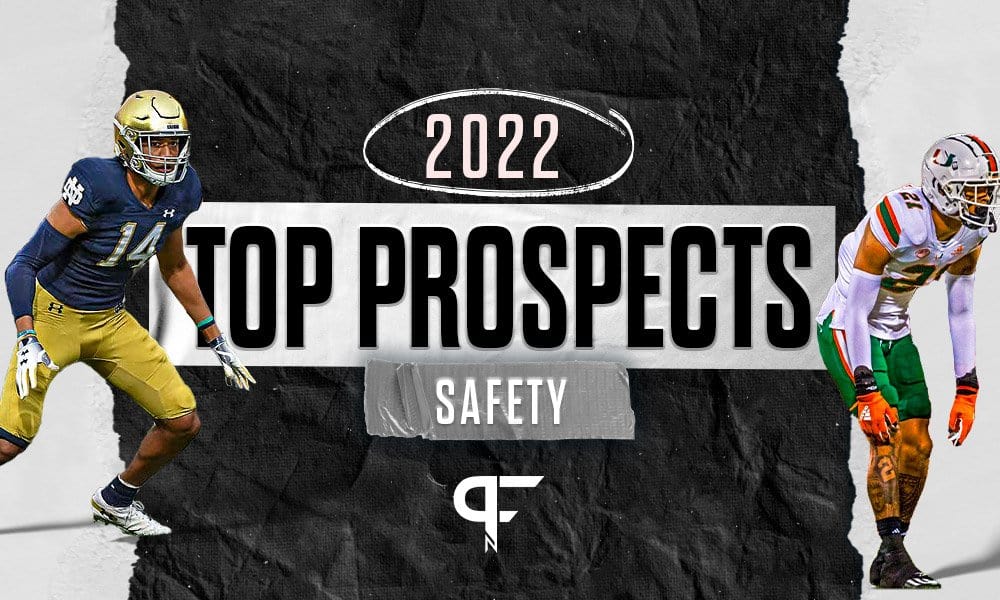 Although there were 21 safeties selected in this year’s draft, there were no first-rounders. Furthermore, only Jevon Holland, Richie Grant, and Trevon Moehrig were picked in the second round. Next year should be an entirely different matter. There is a raft of talent at the position, with the potential for multiple first-round picks. Which players could be the top safeties in this deep 2022 NFL Draft class?

These are my very early rankings of the top safeties in the 2022 NFL Draft class. The rankings are compiled from observations made while watching players in the 2021 class and early adventures into 2022 summer scouting. As such, they’ll be subject to change throughout the summer and 2021 college football season.

Not only is Kyle Hamilton in contention to be one of the top safeties in the 2022 NFL Draft, but he could also be one of the top prospects full stop. In our early 2022 big board, the Notre Dame safety was the second overall player in the class. Only Oregon edge rusher Kayvon Thibodeaux ranked ahead of the Fighting Irish’s defensive playmaker.

The former four-star recruit out of Marist School in Georgia was ranked as the fifth-best safety in the 2019 recruiting class. However, Hamilton has developed into the best there is in college football. He was instrumental in Notre Dame’s run to the College Football Playoff last season. He logged 63 tackles, 4.5 tackles for loss, 1 interception, and 6 pass deflections.

Described as thin out of high school, Hamilton has added almost 30 pounds during his time with Notre Dame. Heading into the 2021 campaign, he measures in at 6’4″ and 219 pounds. Hamilton carries that extra weight exceptionally well, moving around the field with stellar athletic ability. His size helps him to be an absolute force as a tackler.

Meanwhile, his length enables him to make plays on the ball consistently. Combined with impressive football intelligence and versatility, Hamilton should be a slam-dunk top-10 selection.

Brandon Joseph burst onto the college football scene last season as part of a suffocating Northwestern defense. The redshirt freshman racked up 46 tackles, 1 tackle for loss, 2 pass deflections, and demonstrated his playmaking ability with 6 interceptions. Furthermore, he allowed just one play over 15 yards during the shortened year.

It was a remarkable ascension for a player who wasn’t highly regarded out of College Station High School. Joseph was just the 83rd-ranked safety as a three-star recruit in 2019. Although the sample size is small for the Northwestern prospect, he has the skill set to continue to develop into one of the top safeties in the 2022 NFL Draft class.

Joseph has an excellent combination of size, athleticism, and football intelligence. He isn’t afraid to play hard against the run, whether in the backfield or open field. Some of the tackles Joseph made last season were enough to make you wince from the comfort of your couch. Moreover, he possesses ball skills that likely translate from his high school experience on offense.

After two seasons of dominating the Big 12 for West Virginia, Tykee Smith entered the transfer portal in late March. It’s safe to say he was the best defensive player in the portal during the spring. As a result, it didn’t take him long to find a new home. Despite being linked to Penn State, Smith landed with the Bulldogs in early April. Having lost most of their secondary to this year’s draft, Georgia now has two of the top safeties in the 2022 NFL Draft with Smith and Lewis Cine.

Like Joseph above him, Smith was only a three-star recruit as he came out of high school. Even so, he earned Freshman All-American honors in 2019, making eight starts at safety. During his two seasons with the Mountaineers, he amassed 111 tackles, 10.5 tackles for loss, 1 sack, 4 interceptions, 1 forced fumble, and 9 pass deflections.

One of Smith’s most impressive attributes is his versatility. He was used in multiple alignments for WVU. He is listed as a safety for Georgia, but Smith may play the team’s STAR position. That will involve him playing safety, nickel corner, and some linebacker. He is one of the smaller safeties in the class at 5’10”. Still, Smith demonstrates the ability to make plays on the ball. Additionally, his athleticism and tackling ability ensure that he is a force in the ground game.

At 6’1″ and 210 pounds, Battle possesses ideal size for the position. He translates that size into a physical presence on the field. He does some of his best work in the box, whether pressuring the quarterback or attacking ball carriers at the line of scrimmage.

That’s not to say he can’t be productive against the passing game. Battle owns the physical tools to move fluidly around the field. However, he needs to elevate his ability to make plays on the ball this year if he is to live up to his potential as one of the best safeties in the 2022 NFL Draft.

It hasn’t been the easiest path, but Miami’s Bubba Bolden demonstrated last year that he has the repertoire to become one of the top safeties in the 2022 NFL Draft. Previously at USC, Bolden battled a suspension, transfer, and a dislocated ankle on his way to a standout season for the Hurricanes in 2020.

Last year, he totaled 74 tackles, 6.5 tackles for loss, 1 sack, 1 interception, and 3 pass deflections. Bolden showcased flashes of brilliance which, if they become consistent, will ensure he catches the attention of NFL teams ahead of next year’s annual selection event.

Another well-put-together safety, Bolden measures in at 6’3″ and 200 pounds. He uses a combination of his length and physicality to be a dangerous tackler. His athleticism allows him to be a sideline-to-sideline threat in the passing game. Having lined up across the secondary, Bolden boasts versatility as a valuable attribute.

Which safeties currently round out the top 10?

Oklahoma State has a pair of senior safeties who could emerge as top prospects in the 2022 NFL Draft. Although Kolby Harvell-Peel garners most of the media attention, Tre Sterling is the safety prospect that I believe could emerge as the better of the two by the time Roger Goodell kicks off the draft in Las Vegas.

Sterling heads into this college football season with 146 career tackles, 19 tackles for loss, 2 sacks, 3 interceptions, and 12 pass deflections. He is a true heat-seeking missile, exploding out the defensive formation until he finds and often obliterates his target. Despite being slightly shorter than some of the safeties in the class at 5’11”, Sterling still owns the capacity to impact the passing game admirably.

Georgia’s junior defensive back Lewis Cine may be the hardest hitter of any of the top safeties in the 2022 NFL Draft. He has displayed unparalleled physicality throughout his short career with the Bulldogs, screaming downhill to deliver earth-shattering collisions regularly.

Unfortunately for Cine, one such collision resulted in his ejection against Florida, becoming the hallmark of his college career. Yet, that one example shouldn’t be held up as his defining moment. From an early viewing, his tape is littered with clean and brutal examples of his ability to impact the game.

While Cine has game-changing speed and physicality, he will need to elevate his prowess as a playmaker in the passing game. If he can achieve that this year, Cine should fly up draft boards quicker than he flies around the secondary.

Another program with an embarrassment of riches at the safety position is Texas A&M. Both Leon O’Neal and Demani Richardson can be among the top safeties in the 2022 NFL Draft class. The two are of similar stature at 6’1″ and around 210-215 pounds. Richardson enjoyed a solid start to the 2020 season. On the other hand, he struggled in his return following a leave of absence. Overall, I was more impressed with O’Neal’s contributions thus far.

The senior safety has accumulated 103 tackles, 7 tackles for loss, 4 interceptions, and 7 pass deflections during his Aggies career. He excels as a strong safety, making plays in and around the box with his tackling expertise. O’Neal possesses quality speed to close on ball carriers. He also exhibited disruptive ability in the short and medium passing game.

The Miami Redhawks’ Sterling Weatherford is an intriguing smaller-school prospect who could establish himself as one of the top safeties in the 2022 NFL Draft. He has impressive size at 6’4″ and 221 pounds and puts that to use against the run and the pass.

Throughout his career in the MAC, he has tallied 143 tackles, 8.5 tackles for loss, 2 sacks, 2 interceptions, 15 pass deflections, and 2 forced fumbles. The statistical résumé speaks to his ability to impact the game in multiple ways. Weatherford utilizes his physicality and football intelligence at the line of scrimmage and his length as a playmaker in the backend.

Troy Polamalu established himself as one of the best safeties to ever do it, and his nephew is set to carry on the family legacy. Whereas Polamalu was on the diminutive size at 5’10”, Isaiah Pola-Mao is striking at the other end of the scale.

An impressive 6’4″ and 205 pounds, the USC safety is long and rangy. That helps him excel in various areas of the game. Most noticeably, his length combined with impressive speed and football instincts allows him to roam the field and make plays in the passing game.

Despite the size difference, Pola-Moa conjures up the physicality that made his uncle such a terror in the NFL. He can lay a hit with the best of them and has registered 121 tackles, 8 tackles for loss, and 1.5 sacks in his career.

Honorable mention for the top safeties in the 2022 NFL Draft