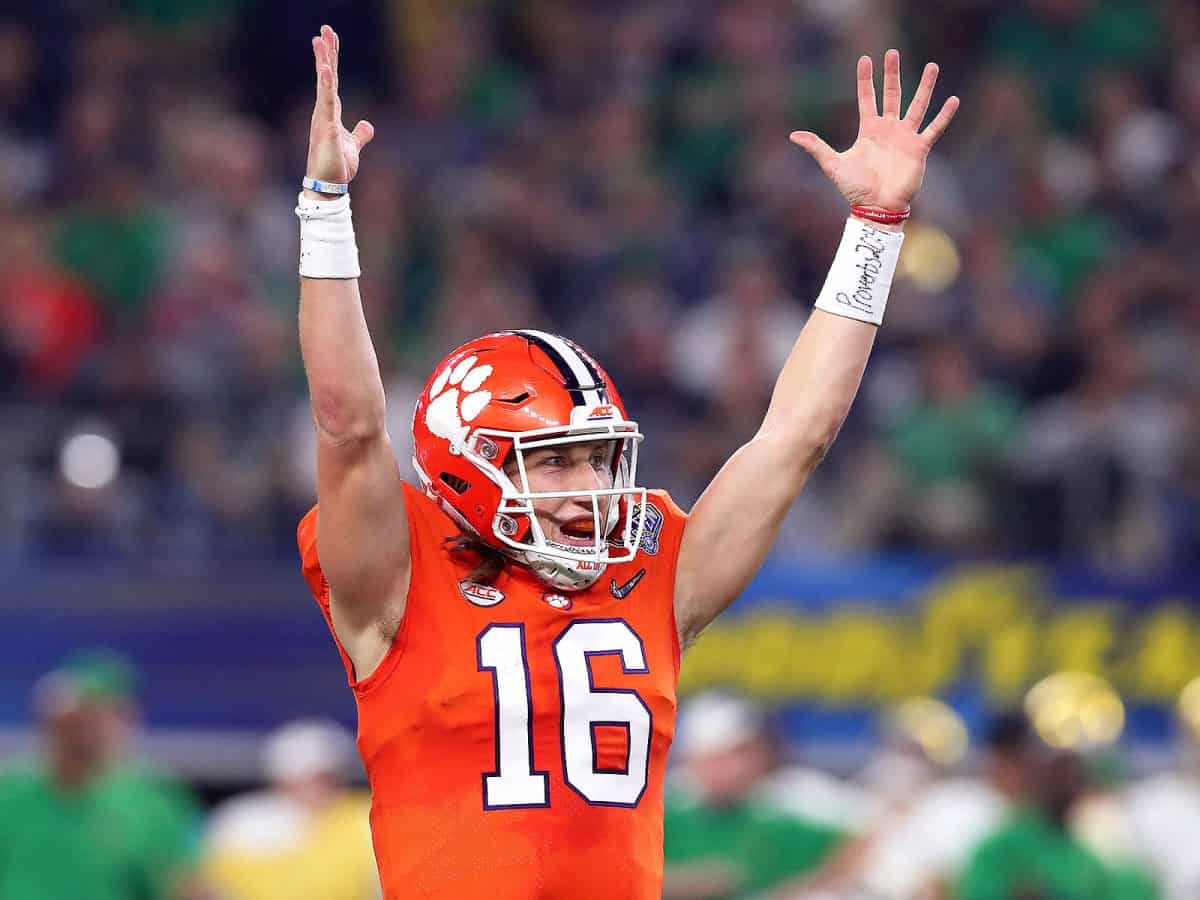 Now that the final draft card has been turned in and Georgia linebacker Tae Crowder has been deemed “Mr. Irrelevant” of 2020 NFL Draft, it’s time to shift the focus to next year’s draft with this two round 2021 NFL mock draft.

The Cincinnati Bengals, Miami Dolphins and Los Angeles Chargers are no longer in the quarterback market as these three teams were able to secure their franchise signal-callers this week.

The prize of the 2021 NFL Draft is Clemson quarterback Trevor Lawrence. He is one of the most complete quarterback prospects to ever enter the NFL Draft. He won a National Championship as a true freshman, which put him on the map as being an elite prospect. Overall, the 2021 quarterback group isn’t as talented as the 2020 group, but many would suggest that Lawrence is the best prospect among the ’20 and ’21 classes.

When it comes to the strongest positional groups of the 2021 NFL Draft, it’s a toss-up between wide receiver and cornerback. First, the headliners of the wide receiver group are Ja’Marr Chase of LSU, Purdue’s Rondale Moore, Clemson’s Justyn Ross, and the Alabama tandem of Jaylen Waddle and DeVonta Smith. Next, the cornerback group features Alabama’s Patrick Surtain Jr. and Josh Jobe, South Carolina’s Israel Mukuamu, and Ohio State’s Shaun Wade.

With all that said, let’s take a look at my two round 2021 NFL mock draft.

Jacksonville plans to roll the dice and ride with quarterback Gardner Minshew for the 2020 season. Well, that roll of the dice leads them to the first overall pick in the 2021 NFL Draft. The good news is that the Jaguars just landed the biggest superstar the franchise has ever had.

Penei Sewell is the best offensive tackle prospect to enter the NFL ranks since Laremy Tunsil. While the Bengals drafted Jonah Williams just two years ago, selecting Sewell will allow Williams to kick inside to guard and give the Bengals a brick wall on the left side of the offensive line.

The Redskins will be thinking long and hard about Justin Fields with this pick, but instead, they grab a potential lock-down cornerback, which is something the team desperately lacks in 2020.

Despite signing Teddy Bridgewater to a three-year deal this offseason, the Panthers will be thinking long term and select their quarterback of the future.

During the 2020 draft, the Dolphins got their quarterback in Tua Tagovailoa and built a formidable offensive line in front of him. Now, they get him a big-time weapon in the passing game. Ja’Marr Chase was the best wide receiver in college football in 2019, and it is fair to expect an encore in 2020.

The Jets don’t have anyone to sack the opposing quarterback, so the ultra-productive Gregory Rousseau would be a home-run selection. Rousseau is coming off of an impressive 2019 season, where he posted 15.5 sacks.

The “G-Men” traded Odell Beckham Jr. to the Cleveland Browns and have never appropriately replaced him. If the Giants want to put quarterback Daniel Jones in the best position to succeed, they better get him a viable number-one receiver.

Matthew Stafford is a good quarterback, but for some reason, it isn’t translating into wins for the Detroit Lions. The Lions should start thinking about life after Stafford and this gifted passer from North Dakota State is the best player that no one has ever heard of. Lance’s 2021 draft prospectus will skyrocket when the draft community gives him more attention.

The Arizona Cardinals are building something special. Kyler Murray is the real deal and now has DeAndre Hopkins as a target. Landing a game-changing tight end, who possesses big-time red-zone ability, will make this offense even more dangerous.

Micah Parsons plays like his hair is on fire, as he makes plays all over the field. Raiders’ General Manager Mike Mayock will fall in love with Parsons, who could enhance the team’s linebacker group.

Priority number one for the Chargers should be protecting the blindside of Justin Herbert. Samuel Cosmi provides an immediate upgrade at left tackle.

The Broncos are a young, exciting team on the rise without many needs. One thing they could use is a true shutdown cornerback that can handle the opposing WR1s, which is something that this talented cornerback from South Carolina can do.

A team can never have too many legitimate pass-rushers. Xavier Thomas hasn’t shown a high volume of production to date, but the talent and traits are present.

The Miami Dolphins’ goals for the 2020 NFL Draft were to get their quarterback and build in the trenches. In 2021, it’s to add explosive playmakers. Travis Etienne is the best running back in this draft and he gives the Miami Dolphins a legitimate home-run threat.

While Taylor Gabriel and Anthony Miller are good players, the Bears need a better option to complement Allen Robinson. Waddle is explosive and oozes big-play potential.

There is smoke surrounding the Browns eventual trading of wide receiver Odell Beckham Jr. and where there is smoke, there is fire.

The Jaguars have selected one of the best quarterback prospects in the history of the NFL Draft and now turn their attention to keeping him upright.

The Vikings defense was at its best when they had the “Williams Wall” in the middle. Tyler Shelvin is a plug-and-play prospect, who will give the Vikings their next great interior defensive lineman.

Phil Rivers will be one and done in Indianapolis and I am not putting much stock in 2020 4th round pick Jacob Eason. Enter Brock Purdy as the Colts new franchise quarterback.

The Buccaneers have some adequate cornerbacks; however, they don’t have that true number-one player. Tyson Campbell presents impressive size and length and comes with impressive movement skills.

Brevin Jordan is an athletic player who can create mismatches for linebackers and safeties forced to cover him. Also, this selection gives quarterback Ryan Tannehill a tremendous red-zone target.

The Bills don’t have many needs; however, their offensive line could use some upgrades. Leatherwood is a versatile road grader who can bolster the Bills’ offensive line.

The cupboard is bare when it comes to the linebacker position for the Philadelphia Eagles. Dylan Moses suffered a significant injury in 2019, but if he regains his form, he is one heck of a player.

Before a season-ending injury in 2019, Marvin Wilson was the best defensive tackle in college football. The improvement he made from 2018 to 2019 was simply astonishing. Seattle adds some beef up front and strengthens the defensive line as a whole.

The Steelers need to start preparing for life after Big Ben. Jamie Newman will flourish for the Georgia Bulldogs in 2020 and elevate his draft status. He has special size and athleticism to work with.

In typical Patriots fashion, it isn’t sexy, but it’s impactful. Carlos Basham is the next great edge setter in New England.

Shaun Wade has no business being available at this point, so Dallas runs to the podium to turn in the pick. Wade is quick, versatile and dynamic, making him a home-run selection.

The Packers had an interesting 2020 draft, but this time it is back to the basics. Despite signing Rick Wagner in free agency, right tackle remains a need.

Sterns is a dynamic playmaker in the secondary, which is one of the few things the talented 49ers’ defense needs.

Marshall Yanda retired after the 2019 season, and the run game is essential to the identity of the Ravens’ offense. Trey Smith is a big, strong people-mover who fits the Ravens profile.

Finding a quality cornerback to line up opposite of Marshon Lattimore will be paramount in a division featuring Tom Brady and his crew of weapons.

The Chiefs have all of the offense in the world, so they need to shift the focus to the defensive side of the ball. Trey Dean III makes their secondary much improved instantly.