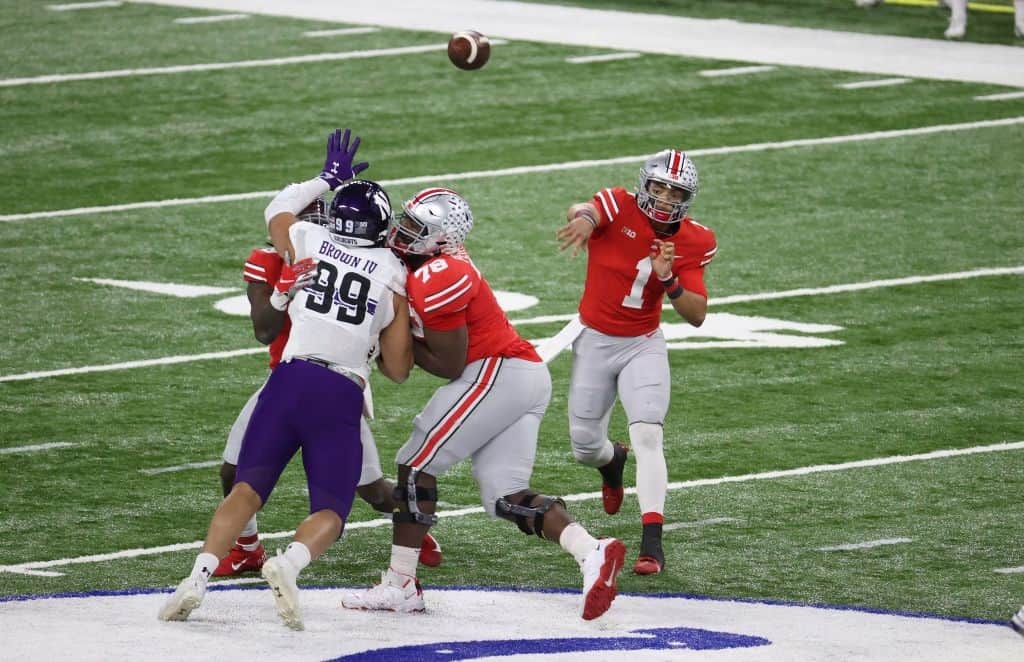 The 2021 NFL Draft will feature some polarizing prospects on both sides of the ball. Clemson quarterback Trevor Lawrence has already been labeled by many as the best overall prospect in the class. Oregon’s offensive lineman Penei Sewell could be the next cornerstone offensive line piece for some lucky franchise. Penn State linebacker Micah Parsons could end up as a top-five pick in this 2021 first-round NFL mock draft.

With the Jaguars currently in the driver’s seat for the first overall pick, this is a no-brainer. This team is going through a rebuild, and what better way to kick the process off with a franchise quarterback? Clemson’s Trevor Lawrence is a truly gifted athlete who is one of the best arm talents we’ve seen in years.

Combine his touch, arm strength, and downfield accuracy with a large frame that isn’t afraid to get mobile, and you’ve got yourself a complete package. Assuming that the Jaguars look for a new head coach (Dabo, maybe?), it will be a great scenario for the team.

With winning themselves out of the Lawrence sweepstakes, one would assume the Jets still take a quarterback, right? Not so fast, my friend. While I’m sure the Jets fans would be adamant about ridding themselves of the entire Adam Gase era, including Sam Darnold, that won’t solve all the issues. Moving on from Gase is one thing, but building around Darnold is another.

The team invested a high pick in tackle Mekhi Becton in 2020, and he looks to be a cornerstone left tackle. What if you could get two young, talented offensive tackles to protect your quarterback? Oregon’s Penei Sewell is one of the best offensive tackles we’ve seen since Joe Thomas. The Outland Trophy winner could fit nicely across from Becton and help protect Darnold and boost the Jets rushing offense.

The Bengals were top of the order for the 2020 NFL Draft and selected Joe Burrow. Burrow was playing extremely well before a devastating knee injury ended his season and will likely keep him out for most of 2021. While taking a QB seems tempting for the Bengals, they still need to add more to the defensive side of the ball.

Miami’s Gregory Rousseau would be an excellent addition to the Bengals defensive front. Rousseau brings raw talent and athleticism, but he’s versatile enough to play off the edge or inside. His explosiveness and burst off the edge will be a necessity in the AFC North for years to come.

While Teddy Bridgewater has played admirably for the Panthers in Matt Rhule’s first season as head coach, there’s a chance he doesn’t start in 2021. Rhule and offensive coordinator Joe Brady could have a chance to get a young quarterback in the 2021 NFL Draft to mold for their offense. Justin Fields out of Ohio State could be that quarterback.

Fields would fit nicely in Brady’s offensive system, as he utilized many RPO concepts at Ohio State. While he’s far from a finished product, Fields still has the potential to be a franchise quarterback. Surrounding him with key role players like running back Christian McCaffrey and receivers D.J. Moore, Robby Anderson, and Curtis Samuel would be key for his growth.

The Atlanta Falcons will be going into 2021 with a new head coach and likely a new approach to how they play defense. With a need for more playmakers on defense, I have the Falcons going defense in this 2021 first-round NFL mock draft. Micah Parsons, the linebacker out of Penn State, could be another building block for a defense that has some young talent for the future.

After acquiring Houston’s first-round selection in 2021, the Dolphins use it to reconnect their young quarterback with one of his former teammates. Alabama wide receiver Jaylen Waddle makes a ton of sense for Miami in this 2021 first-round NFL mock draft. Waddle was arguably the most dynamic receiver in the country before he suffered a season-ending ankle injury.

While DeVante Parker and Jakeem Grant have been serviceable for the Dolphins, Waddle can bring the explosion that Tua Tagovailoa needs to have in 2021. They already have an established relationship, which could help Waddle transition to the pro level.

The Eagles secondary has suffered this season, despite bringing in Darius Slay and Nickell Robey-Coleman. With their first pick of this 2021 first-round NFL mock draft, the Eagles shore up their spotty secondary with one of the country’s best corners.

Surtain is a bigger cornerback who has good speed and even better ball skills. The son of a former pro player, Surtain uses his physicality well in rerouting receivers, and he forces opposing quarterbacks to make tough throws. The Eagles can benefit from having Slay and Surtain on the field and moving Robey-Coleman into the slot.

This selection may draw some attention from Cowboys fans, especially with quarterbacks Zach Wilson and Trey Lance still on the board. The Cowboys’ gamble of Aldon Smith has paid off, and DeMarcus Lawrence is still on the other side of the line, but the Cowboys need to add more bulk to the defensive front.

Adding a player like Kwity Paye out of Michigan gives them a versatile player on the defensive front who utilizes his size with power to bully offensive linemen. Whether they play him off the edge or inside, Paye could be a key contributor right away for the Cowboys defense.

The Chargers offensive line has been less than ideal this season. If Los Angeles wants to keep Justin Herbert healthy long-term and improve their rushing offense, they’ll need to make an upgrade on the offensive line. Wyatt Davis is an instant upgrade at guard. He’s an aggressive blocker, which works well in any run scheme, and is a stonewalling pass blocker.

If the Chargers want their offense to continue to grow with Herbert under center, Davis is a great plug and play replacement on the offensive line.

In 2020, the Giants selected Xavier McKinney with their second-round selection to rebuild their struggling secondary. Still, an injury put him out for the majority of the season. In 2021, they’ll get McKinney back healthy and will have an opportunity to add to their rebuilding defense with their first-round pick.

Caleb Farley would be a player who could come in and make an instant impact on the Giants’ defense. Injuries will be a concern for Farley, but he is a dominant cornerback when he’s healthy. He’s got a solid blend of size and speed, as well as versatility to play in either zone or man schemes.