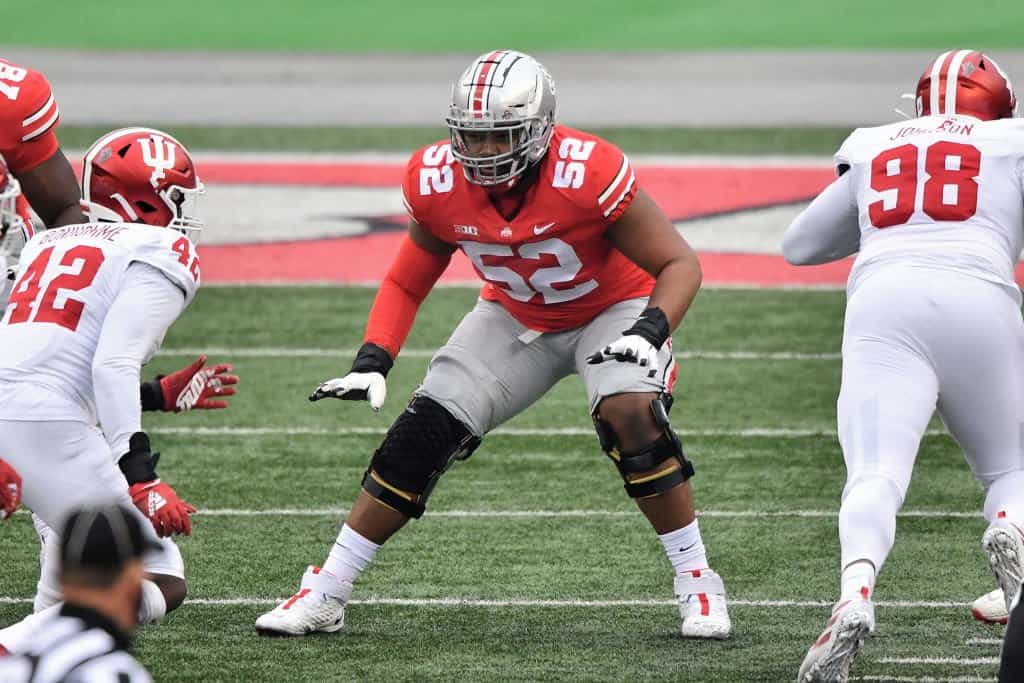 We saw plenty of terrific performances from offensive prospects who improved their NFL draft stock in Week 14 — and they’ll be playing on Sundays. Here are the risers and sliders for Week 14. And don’t forget to begin your own mock draft with PFN’s 100% free Mock Draft Simulator!

Week 14 gave us one of the most entertaining games of the season in a contest that was cobbled together at the last minute due to outbreaks. Let’s dive into the details on a few prospects.

In my mock draft last week, Davis went to the San Francisco 49ers with the 16th selection of the first round. He looked every bit of a mid-first-round pick against Michigan State.

Davis is a mobile blocker who moves exceptionally well on his feet and looks terrific in motion. He’s added the element of power this year and has manhandled everyone he’s faced, including Spartans defensive tackle Naquan Jones. The leadership Davis showed for a Buckeyes squad that was undermanned due to an outbreak will not be lost on scouts in April either.

Green is all over the board in the scouting community, with some grading him as a fourth-round prospect and others stamping him as a late-rounder. Some scouts feel he projects to tackle in the NFL, while others believe guard will be his best position. There’s one thing almost all agree on: Green will make a Sunday roster in one form or another. A productive three-year starter, Green is tough, fundamentally sound, and smart. At the very best, he’s a starting right tackle in the NFL. At the very least, he’s an inexpensive utility lineman on a depth chart.

Gators quarterback Kyle Trask could well be on his way to winning the Heisman Trophy, and if he does, Toney will have been a large part of the winning recipe. Toney is in the midst of a career year, and his numbers in 2020 come close to exceeding his combined totals from the prior three seasons — unquestionably, one of the risers from Week 14 who improved his draft stock.

Toney is a true vertical threat who is explosive and quick. He runs scissor-sharp routes, which helps him separate from defenders, and he makes all the catches. He came into his senior season with last-round grades, but Toney now grades as an early Day 3 pick and could eventually slide into the top 100 selections.

Despite a losing effort by North Texas (who fell to Louisiana Tech), Darden continued to pile up numbers in another terrific performance. The senior finished with eight receptions for 135 yards and three TDs, averaging 16.9 yards per catch. In eight games this season, the Hula Bowl-bound senior has amassed 66 receptions, 1,017 yards, and 15 TDs.

Darden is small (5-foot-7.5, 175 pounds), but he’s quick, explosive, and sure-handed. He competes to come away with the tough reception and does not back down to a challenge. Darden could slide into the late rounds next April, but regardless of whether he’s selected in the draft, he’ll compete to make an NFL depth chart as a fifth receiver who works out of the slot and returns kicks.

The big tackle has been a consistent four-year starter at Purdue, and he’s very much an under-the-radar prospect. He’s a massive blocker who measures 6-foot-6.5 and over 300 pounds. Hermanns does a terrific job using his frame and girth to seal defenders from the action and overpowers them on running downs. Hermanns will move from left tackle to the right side in the NFL, and he has enough ability to make a depth chart as an inexpensive backup. One of the most intriguing Week 14 risers who improved his NFL draft stock.

Despite being snubbed by NFL scouts, I graded Crider as a priority free agent (PFA) off his junior film, when he lined up at guard. The senior moved to center this year, and he’s having a terrific season that has catapulted his draft stock. Crider is tough, smart, and fundamentally sound. He did a terrific job against the powerful Wisconsin defensive line despite snapping to the Hoosiers backup signal-caller. After he entered the season ungraded by scouts, Crider could slide into Day 3 of the draft.

After a slow start to the season, Morris has picked up the pace, catching 16 passes for 211 yards the past three games. Morris is an athletic “move” tight end and a consistent pass catcher with reliable hands. If he runs well before the draft, expect Morris to end up in the late rounds next April.

Talk about coming out of nowhere. Prior to the season, Powell was unknown in the scouting community, and with good reason. He was a part-time player for Clemson the prior four years with 40 receptions. With a desperate need at receiver after Tee Higgins’ departure to the NFL and the loss of Justyn Ross to injury, someone needed to fill the void — cue Powell.

After a modest start to the season, Powell posted 105 yards receiving on 11 receptions against Boston College, 161 yards on six catches against Notre Dame, and 176 yards on six grabs against Pitt. This weekend against Virginia Tech, it was 90 yards receiving on four catches. His numbers so far in 2020 include 41 receptions, 684 yards, and five TDs. While scouts will need firm measurements and testing numbers on Powell, he is no longer an unknown. In fact, he’s someone who could land in the middle rounds of the draft.

O’Brien was graded as a high-end PFA before the season, and a good senior campaign could have vaulted him into the late rounds. That’s not happening. O’Brien has completed barely 56 percent of his throws with 591 yards passing in four games. He has three touchdowns and two interceptions. O’Brien is a nice-sized passer with an NFL arm, but he must improve his accuracy and decision-making.