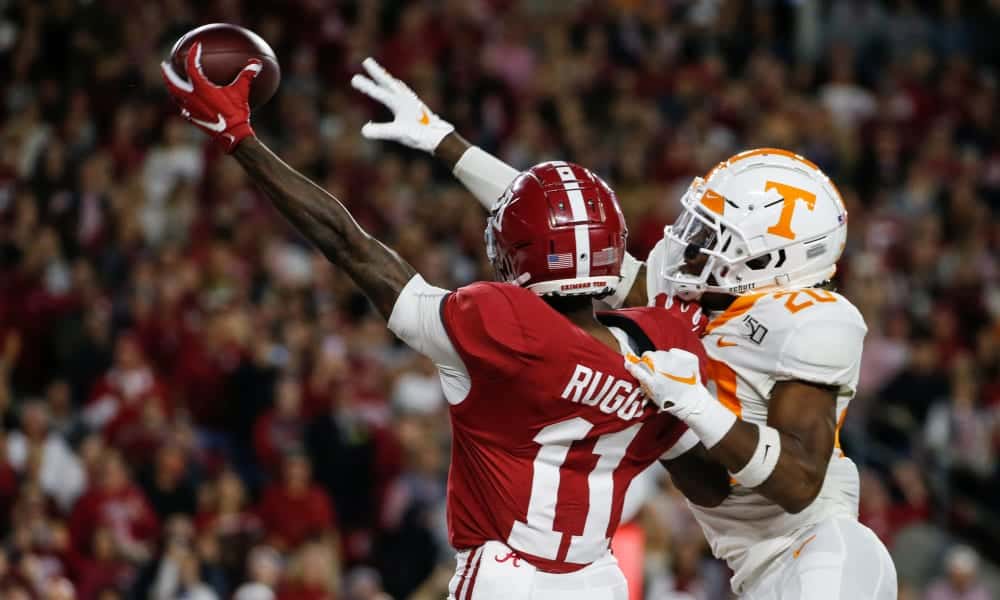 Yesterday we published part one of my 2020 NFL Draft evaluations for the NFC, identifying steals and reaches for each team as well as suggesting who is the most important player of the draft class for each team. Today I focus on the AFC.

Steal: Either of the Ohio State players selected by Baltimore can be counted as steals. J.K. Dobbins was terrific value late in round 2, and so was Malik Harrison a frame later. Dobbins is the better football player, but Harrison has great upside.

Draft Hinges On: I graded Patrick Queen lower than most, but he will be counted on for immediate production.

Steal: A.J. Epenesa and Gabe Davis were both bargains and legitimately should have been selected a round earlier than they were chosen. Expect rookie production from these two.

Reach: I like Zack Moss the player, but his durability is a major concern and I would not have selected him before the third day.

Draft Hinges On: Though he wasn’t selected in this draft, Stefon Diggs will be counted on heavily this year and is the most important piece the Bills added with this year’s draft capital.

Steal: The news I broke at the Scouting Combine on the foot injury to Akeem Davis-Gaither was part of the reason he fell into the fourth round. Once healthy, teams will realize the linebacker was a second-day talent.

Draft Hinges On: The Bengals had a good draft, but if Joe Burrow does not pan out, that’s all people will talk about; even if all the other players selected by the Bengals become productive starters.

Steal: Donovan Peoples-Jones gets consideration here, but I’m going with Jordan Elliott in the second half of round 3. He’s a good athlete and a terrific player, and he lines up at a priority position.

Draft Hinges On: I’m skeptical Jedrick Wills Jr. will be a good left tackle in the NFL. Right tackle? Yes, but I have my concerns about Wills on the blindside.

Steal: I count five players the Broncos selected in this draft who could be classified as steals, but I’m going with Albert Okwuegbunam. As I mentioned previously in the lead-up to draft weekend, character issues raised red flags, but the tight end is a legitimate home-run threat at the position.

Draft Hinges On: Jerry Jeudy will be counted on to produce and stretch the field in 2020.

Reach: Penn State cornerback John Reid has a history of never meeting the high expectations placed on him.

Draft Hinges On: No single player selected by Houston will make or break this draft, rather it’s the many moves Bill O’Brien has made that will dictate opinion. If they work out, O’Brien is a hero. If they do not, people will allege that the Texans could’ve had this player or that player rather than giving away early selections in trades.

Steal: Plenty of options here, including the trade for DeForest Buckner, but I’ll go with Jacob Eason in round 4 — a quarterback with huge upside.

Reach: I’ve had Julian Blackmon graded as a draftable prospect since his sophomore season, but he was not good enough to be selected on day two.

Draft Hinges On: Like the Texans, no single player selected will make or break this draft. Rather it’s everything from the trade for Buckner to the production of Michael Pittman Jr. and Jonathan Taylor.

Steal: Most teams graded Ben Bartch as a day two pick, specifically the third round. He can play either tackle spot and was a bargain in the fourth.

Reach: Neither Tyler Davis in the sixth round nor seventh-round pick Chris Claybrooks would have been drafted by another team.

Draft Hinges On: The Jaguars first three selections — C.J. Henderson, K’Lavon Chaisson and Laviska Shenault. All three have big upside but come with downside as well for different reasons.

Steal: The bottom of round 3 was great value for Lucas Niang, who will eventually be a longtime starter for the Chiefs.

Draft Hinges On: When you’ve just won the Super Bowl, no single player in the draft is expected to make a huge difference.

Steal: Bryan Edwards in round 3 and Amik Robertson a frame later were both value selections.

Reach: No one, and I mean no one in the league, had Damon Arnette projected as a first-round prospect.

Draft Hinges On: Henry Ruggs had tons of hype around him in the lead-up to the draft, and now he has even higher expectations. He goes from being the number 3 receiver at Alabama to the expected number 1 for the Raiders.

Steal: Though he timed 4.60 seconds in the 40-yard dash at the combine, K.J. Hill is a terrific receiver who plays fast.

Draft Hinges On: This draft will live and die with Justin Herbert.

Steal: Few expected Curtis Weaver to get out of the third round. He was overweight and sluggish last season, but if he gets back to the form he showed during the 2018 campaign, Miami got a huge steal. Honorable mention goes to Jason Strowbridge, the Dolphins’ prior choice.

Reach: Robert Hunt, who most project to guard, was a slight reach at the top of round 2.

Draft Hinges On: If Tua Tagovailoa pans out, this pick will be likened to Dan Marino in 1983 when the top-rated quarterback slid to Miami. If Tua can’t stay healthy, most will ask why they didn’t select a tackle with the fifth pick.

Steal: Josh Uche late in round 2 fits the Patriots mold in every manner: style, substance and personality.

Reach: No one expected Cassh Maluia to get drafted – not even me, the only one on the internet to grade Maluia and offer a scouting report on his next-level prospects.

Draft Hinges On: Jarrett Stidham. I know he wasn’t selected this past weekend, but if he doesn’t pan out — and I believe he will — everyone will crush the Patriots for not taking a signal caller at any point in the draft.

Steal: Denzel Mims was described to me as the most complete package at the receiver position. If he develops into a starter, this will be one of the finest selections by the Jets in a long, long time.

Reach: Third round selection Ashtyn Davis was not a reach in the classic sense, but center/guard Matt Hennessy and receivers like Gabe Davis and Bryan Edwards were higher-rated and better fits.

Draft Hinges On: The Jets came into the draft needing a lot of help at receiver in what was a historically deep receiver draft. If Denzel Mims does not put up big production, fans will justifiably question the decision to take just a single wideout in 2020.

Steal: Running back Anthony McFarland was never properly appreciated in the scouting community and had a bogus allegation of poor football character dropped on him the week before the draft. He’s a terrific player who will be a solid rotational back in Pittsburgh.

Draft Hinges On: Pittsburgh has always done a good job developing receivers, and I expect that to continue with Chase Claypool. That said, passing up on running back J.K. Dobbins in favor of Claypool means the Notre Dame pass-catcher best be on his game from the get-go.

Steal: Entering the season, Kristian Fulton was given first-round grades by scouts. And while he didn’t play up to expectations, getting him at the bottom of round 2 was a steal.