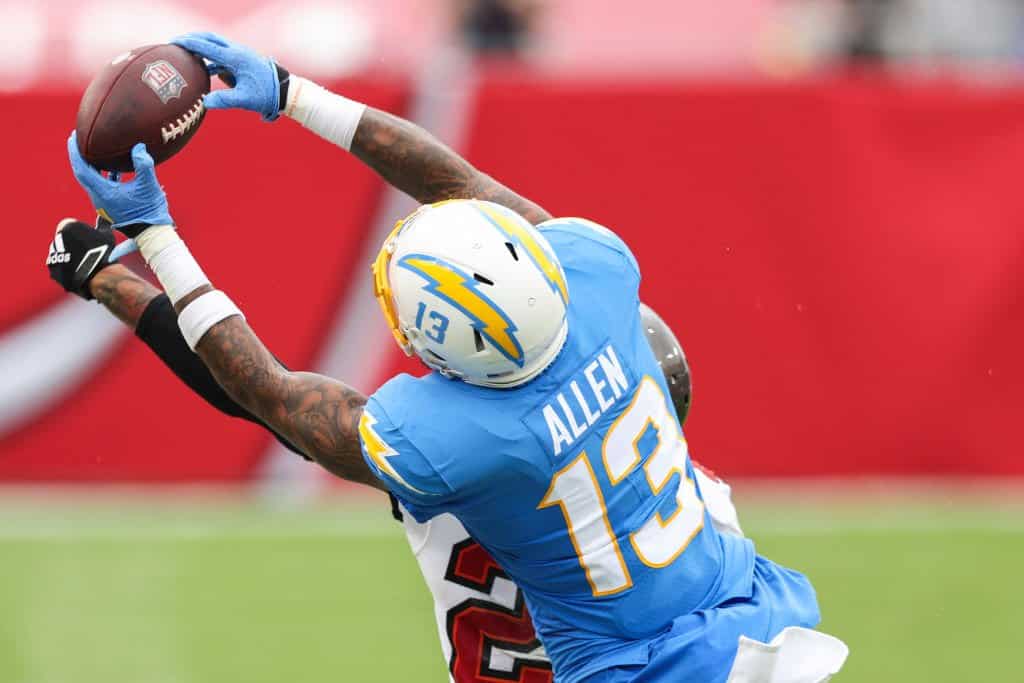 Keenan Allen has had his struggles with injuries in his career, but heading into the 2020 season, he had turned into one of the more dependable fantasy options at a position that often sees players miss time. After missing eight games in 2015 and 15 games in 2016, he’s taken part in every game since. That’s why fantasy football managers may find themselves in an unfamiliar situation this week as they await updates on Allen’s availability following his early departure in the Los Angeles Chargers’ Week 5 Monday Night Football matchup with the New Orleans Saints.

Allen has been one of the best wide receivers in the NFL for years and has finished as a top-15 fantasy WR in each of the last three seasons. The fact that Philip Rivers, the quarterback with whom he had developed such a strong connection, left the Chargers to join the Indianapolis Colts in free agency caused a bit of uncertainty.

Tyrod Taylor, the veteran who backed up Rivers in 2019, was promoted to the starting job. Having built a career as a game manager and a conservative passer, there was concern that the team would rely on a shorter passing game, moving the ball with a dink and dunk offense. That combination of factors caused Allen to be one of the biggest bargains of the 2020 fantasy football season, and managers who were able to get him at a discount will have been pleased with his output so far.

Is Keenan Allen injured or healthy?

At the moment, it looks likely that Keenan Allen’s fantasy outlook is good because reports are he is likely to play. Head coach Anthony Lynn said that he was dealing with back spasms in the Week 5 loss to the Saints and his initial thoughts were that Allen would be fine for the Week 7 contest against the Jacksonville Jaguars.

The fact that the Chargers didn’t play in Week 6 took the pressure off the wide receiver to rush back before he was 100%, but it also left Keenan Allen’s fantasy managers guessing, as teams on a bye week are not required to give injury updates. However, we should know more when the game week begins and the Chargers have to update their injury report. At that stage, we will see what their medical team believes that Allen’s game status is.

With the game against the Jaguars not taking place until Sunday, fantasy managers should be confident that the 13-day break will have given Keenan Allen more than enough time to recover.

Should I start Keenan Allen in fantasy football in Week 7?

If Keenan Allen suits up for his sixth game of the 2020 season, then you should start him in your fantasy lineup. He began the season slowly, struggling to connect with Tyrod Taylor, who lacked chemistry with the majority of his receivers.

Justin Herbert took over as the starting quarterback of the Los Angeles Chargers in Week 2, and his accuracy, ability to extend plays, and his gunslinger mentality look to have brought out the best in Allen and his wide receiver partner Mike Williams. Allen’s route running has always been a strength, and he’s in the NFL’s upper echelon. With Herbert standing tall and taking deep shots downfield, very few cornerbacks have been able to stay with him.

Related | Joe Mixon Fantasy Outlook: Waiver wire targets if he is out for Week 7

After Herbert took over the starting job, Allen played four full games. He was targeted 40 times for 28 receptions, 290 receiving yards, and one touchdown over that stretch. Fantasy managers would naturally like to see him in the end zone more often, but the touchdowns have been spread around with Williams, Hunter Henry, and a selection of irrelevant fantasy options.

Despite being ruled out for the rest of the game in the second quarter of the Chargers Week 5 clash, Keenan Allen’s fantasy performance did just enough to keep fantasy teams competitive. Even though he only caught two passes for 29 yards, one of those was a 17-yard touchdown pass from Herbert, which meant that he was still able to have a relatively productive day.

The Chargers play the Jaguars on Sunday in a game that should see Allen in a position to capitalize as he goes up against an inexperienced cornerback group. C.J. Henderson, the ninth overall pick in the 2020 NFL Draft, looks to have a bright future, but the secondary is a far cry from the unit that once included Jalen Ramsey and AJ Bouye and competed for the title of the league’s best group.

What is Keenan Allen’s fantasy outlook for the rest of the season?

There’s no reason to think that Keenan Allen’s fantasy outlook will be limited by this injury for the rest of the 2020 fantasy football season. With his bye week out of the way and a consistently high target share, he should continue to be a high-floor option at WR in the majority of his games. His chemistry with Herbert should continue to develop and, assuming that there are no further injuries, there’s no reason to think that he won’t be a top-15 WR at the end of the year.