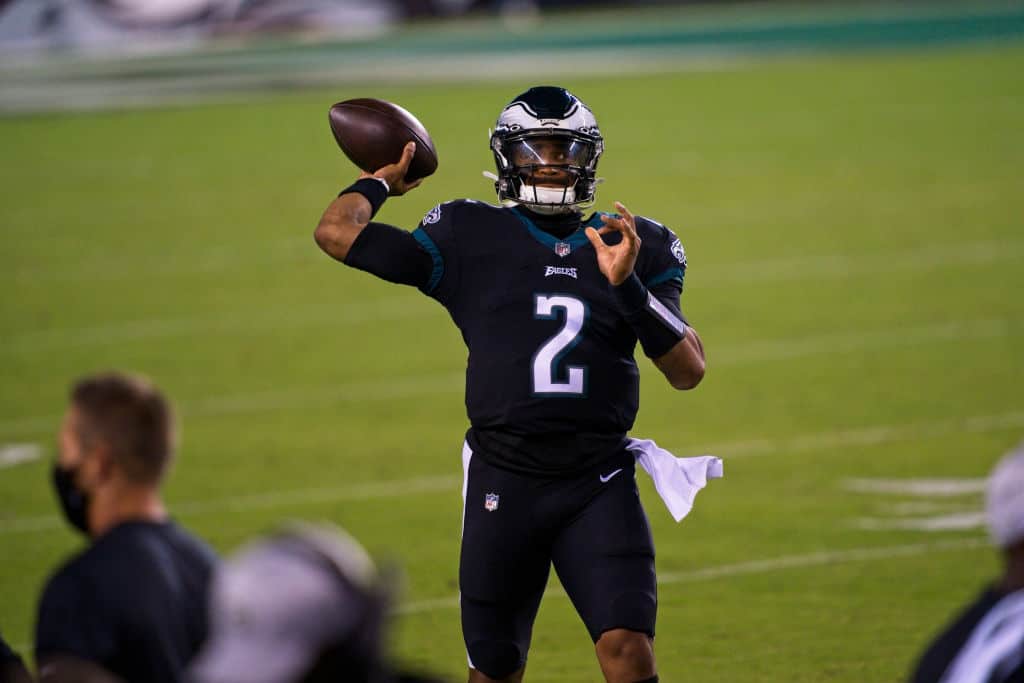 After an eventful Week 12 in fantasy football filled with breakout players, disappointments, and injuries, it’s time to look ahead. With two teams on bye in Week 12, fantasy owners will now have nearly their entire rosters at their disposals. So who are some of the early waiver wire pickups to target in Week 13 for your fantasy lineups? Let’s look at who is deserving of those priority claims.

Don’t look now, but Cousins has two straight games of 300+ passing yards, three touchdowns, and zero interceptions. He’s also thrown for three touchdowns in three of his last four games. Even with Adam Thielen missing the game and Dalvin Cook dealing with an injury, Cousins led the Vikings to their fourth victory in their last five games.

He faces an extremely weak Jaguars secondary in Week 13 and should be in for another solid game. He’s a very solid streaming option for those needing a quarterback.

While he did face the New York Jets, Fitzpatrick looked good with 257 passing yards and two touchdowns in a turnover-free game. Head coach Brian Flores has confirmed that Tua Tagovailoa is the starter when healthy, but Fitzpatrick could be in line for another start with an easy matchup against the Cincinnati Bengals if the Dolphins choose to rest Tua to have him ready for their potential playoff berth. Fitzpatrick will have top 15-18 appeal in Week 13, especially if they continue to struggle running the ball.

Hurts is more of a stash play with reports on Sunday indicating that he had first-team reps in practice at quarterback. We could see Hurts play under center on Monday night, and with how poorly Carson Wentz has played this season, Hurts could see extended work if he plays well.

Hurts was a Heisman finalist in 2019 and has the ability to make plays with his arm and legs, which makes him an immediate appeal to those who may need a spark at the quarterback position. He makes for a solid “lottery ticket” stash for those with the bench space.

Running back waiver wire pickups to target in Week 13

Besides Taysom Hill himself, Murray has been the biggest beneficiary of the mobile quarterback starting in Drew Brees’ absence. In Hill’s two starts, Murray has 31 carries and had 19 in Week 12, which was eight more than Alvin Kamara. Murray turned that into 123 yards and two touchdowns.

Murray is a lock for double-digit carries and now faces a Falcons defense that the Saints ran all over in Week 11. Murray is one of the top waiver wire targets this week.

Coming into Week 12, Smith had 12 carries for 46 scoreless yards on the season. He played extremely well in Week 13 with 16 total touches for 75 yards and a touchdown. He out-touched Brian Hill 16-13 in Todd Gurley’s absence and may be the 1A to Hill’s 1B going forward while Gurley is out.

While they have a tough test in the Saints for Week 13, Smith’s volume makes him hard to ignore as a potential FLEX option for those needing one. He arguably has the most upside of any Falcons’ running backs as of right now.

Akers may have finally done enough to separate himself from Darrell Henderson and Malcolm Brown this past weekend. While he had one less carry than Henderson (10 to 9), Akers led the group with 84 rushing yards and a touchdown. The Rams passing offense is too inconsistent to describe and will force Sean McVay to rely more on their running game to lead them to a potential playoff spot.

Akers has looked like the best running back for the Rams as of late and should hopefully start seeing double-digit touches going forward. He is a high-upside RB3/FLEX moving forward.

Booker’s addition to this list has nothing to do with performance (five carries, six yards) but rather because of his potential opportunity. Josh Jacobs left Week 12 with an ankle injury and did not return. Perhaps that had to do with the blowout loss that the Raiders were on the receiving end of but it’s worth monitoring nonetheless.

Booker is the clear number two running back for the team and would be a near-lock for 15+ touches if Jacobs were to miss Week 13. Especially considering the Raiders play the winless Jets this coming weekend, it could be a game where the Raiders get back on track and run the ball much more than they did against the Atlanta Falcons.

Davis has two games of 70+ yards and a touchdown in his last three. Plus, with John Brown being placed on injured reserve, Davis steps in as the team’s WR3 behind Stefon Diggs and Cole Beasley. Davis is a dynamic rookie who could bring another element to the Bills’ suddenly inconsistent passing offense if he sees a more regular workload in Brown’s absence.

While Davis may not be someone to suddenly start in Week 13, he could be someone who makes a difference in the playoffs if he continues to see more work.

Johnson set career-highs across the board in targets (eight), receptions (four), and receiving yards (96) in Week 12 with D.J. Chark and Chris Conley being inactive. Despite having Mike Glennon at quarterback, Johnson made the most of it and could make a case for more snaps down the line.

With nothing to play for going forward, the Jaguars could be incentivized to see what they have in players like Johnson as they get an early start on their offseason planning. With Gardner Minshew also potentially returning in Week 13, that would only boost Johnson’s value for the rest of the season.

If Samuel is somehow still on your league’s waiver wire, he needs to be a priority claim this week. While the Panthers are on a bye in Week 13, Samuel is more than worth a stash as he has at least 70 yards receiving and/or a touchdown in three of his last four games. Plus, D.J. Moore left Week 12 with a non-contact injury to his leg.

That could mean an extended absence and only more work for Samuel, even with Christian McCaffrey due back in Week 14. He is one of this week’s top waiver wire targets. Samuel is an every-week low-end WR2/high-end WR3.

After setting the world on fire earlier this season with five touchdowns from Week 2 to 4, Tonyan cooled down for a bit. He has now scored touchdowns in back-to-back weeks despite their core skill players being healthy.

The Packers’ offense is playing extremely well and has shown to not be afraid of passing even with big leads. Tonyan is a weekly touchdown threat and is a low-end TE1 for Week 13 and going forward. He is one of this week’s top waiver wire pickups.

Burton has seen 11 targets in the past two weeks and has 67 yards with two touchdowns during that time. The Colts continue to pass the ball more with their run game being inconsistent and their defense starting to show some cracks.

With Michael Pittman and T.Y. Hilton continuing to be hard to trust week-in and week-out, the tight end group is being looked at again. Burton has a touchdown in each of his last two games and are in a must-win situation with their playoff hopes not as secure as before.

The Colts play the weak Houston Texans defense twice in the next three weeks, so Burton could have the opportunity to keep his touchdown streak alive.