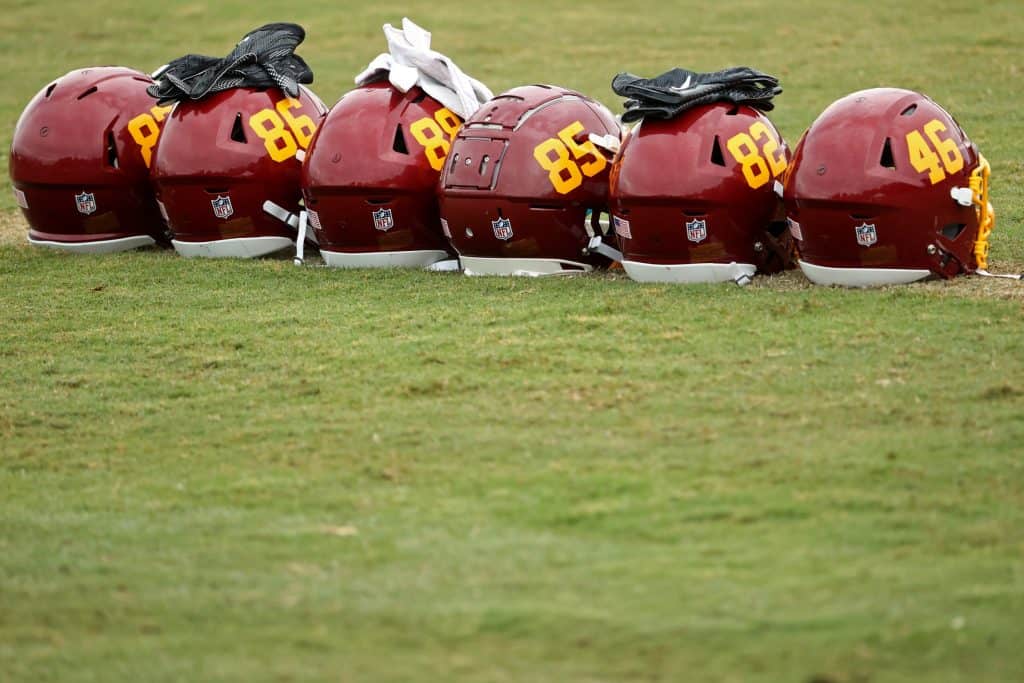 In this 7-Round 2021 NFL Mock Draft for the Washington Football Team, Ron Rivera and his staff let value fall to them. Which top 2021 NFL Draft prospect falls to 19th overall, and how do they fit in Washington’s plan for playoff contention this year? After winning the NFC East last year, Washington has a tough first-place schedule ahead of them. With Ryan Fitzpatrick at quarterback and the additions of William Jackson III and Curtis Samuel, Washington should feel confident about their ability to be in the NFC playoff mix.

As I mentioned earlier, Washington expects to field one of the league’s most tenacious defenses. They have a dominant pass rush that they’ve paired with a shut-down cornerback trio. Last year, the defense lacked a linebacker who can match up and cover tight ends, running backs, and even slot receivers.

Jeremiah Owusu-Koramoah, or JOK, is the best coverage linebacker in the class. He blurs the line between linebacker and safety but will be a full-time WILL in Washington’s defense. Given the roster’s construction, the starting linebackers would likely be Jon Bostic as the SAM and Holcomb playing the MIKE.

Some have concerns with JOK’s size, wondering if he can even be a full-time linebacker in the NFL, weighing just 215 pounds. While it’s true he isn’t an elite block shedder, his ability as an elite man-coverage match-up piece more than makes up for it. Should the team that selects JOK consistently put him in a position where he needs to shed blocks on a down-to-down basis, they’d be misusing him. He would flow behind traffic in Washington, running plays down with his elite play speed and acceleration.

Another thing to consider is JOK would be playing behind football’s top defensive line. Washington’s DL did a great job clogging run lanes and holding up blockers at the line of scrimmage last year. However, their linebackers were incapable of making consistent reads and filling the gaps correctly. JOK, and his high football IQ, make him an improvement to Washington’s run defense, an underrated aspect of this selection.

Washington may still be interested in adding another versatile receiver who can win from the slot. It sounds like they have their eyes on Kadarius Toney, which would lead me to believe they also have a fondness for Purdue’s Rondale Moore.

Moore, like Toney, is an undersized but electric playmaker. Pound for pound, Moore may be the best pure athlete in the class — true 4.3 athlete with fantastic leaping and change of direction ability. His contact balance is silly, and he’s a threat to score whenever he touches the football. With Toney already off the board, Moore was easy value at No. 51.

Splitting time with Adam Humphries in the slot, I’d also expect to see Moore lined up at the Z and occasionally in the backfield. The benefit of having players like Curtis Samuel, Moore, J.D. McKissic, and Antonio Gibson is the versatility to create mismatches across the formation. In a nickel defense, the opposition will be forced to cover two of them with linebackers. How can they hope to defend it? The Football Team rounds out their receiving corps with Moore in this Washington 2021 7-Round Mock Draft.

Washington lucked out with the emergence of Logan Thomas last year. His breakout season should allow the team to feel comfortable waiting until the third round to address the tight end position.

However, they lack any semblance of a TE2. Adding a young, talented tight end like Brevin Jordan makes sense both for now and later. Some don’t realize that Thomas is headed into his age-30 season. Drafting Jordan gives you a dangerous 1-2 tight end duo right now, and you can project Jordan to take over as the top tight end in two or three years once Thomas starts to decline.

Jordan is one of the top athletes in the 2021 tight end class. He’s a tremendous YAC tight end prospect, reminiscent of former Washington tight end Jordan Reed in that aspect. It’s rare to find players that big and be so swift-footed. Jordan has strong hands, and his physical skill set indicates he can become an explosive and precise route runner.

On top of being a solid receiving threat, Jordan is also a willing (but occasionally effective) blocker. His technique is inconsistent, but the effort is there, and he has shown the ability to generate movement at the point of attack. Jordan further rounds out the offense, as coach Rivera has a clear plan in this Washington 2021 7-Round Mock Draft.

Three quarterbacks will likely go on Day 2 of the draft — Florida’s Kyle Trask, Stanford’s Davis Mills, and Texas A&M’s Kellen Mond. I expect the Washington media to connect Washington and Trask, as he’s the trio’s most polarizing name. I prefer Mills, as I think he has the best tools of the three; he would be the best fit behind Fitzpatrick in my eyes.

However, I’d expect Ron Rivera and the Washington staff to hold Mond in the highest regard of the three. A four-year starter, he’s widely considered a leader and respected locker room presence. The Texas A&M QB showed heart throughout his career, which is hard to quantify but is something Rivera values highly. Mond is also the most consistent runner of the three, something Rivera has loved.

Featured | Kellen Mond vs. Kyle Trask: Will both QBs go on Day 2?

Mond has the tools to be successful — more than requisite arm strength with the running ability to hurt a defense if they get careless. His career at Texas A&M was up and down, but you could see the traits you want in an NFL quarterback in the highs. Inconsistency plagued him at A&M, not just from game to game, but his accuracy could vary every possession within a game. He’d need to smoothe out the rough edges, but Mond would get the time to do that in Washington this year.

If the coaching staff thinks Mond can start after his rookie season, he’ll get a chance. If he doesn’t show enough, this draft capital doesn’t prevent them from moving up for a top quarterback in the 2022 NFL Draft.

The last piece Washington’s defense is missing? A true free safety, someone who can play centerfield in Cover 1 and Cover 3. A player with the range to cover ground in a hurry, the ball skills to create turnovers, and a good enough tackler to be the last line of defense. Washington hoped that Troy Apke or Sean Davis could do this last year. Yet, Davis could not make the 53-man roster, and Apke was not up to the task on gamedays.

Instead, Washington finds great value in Texas safety Caden Sterns. Day 3 is off to a strong start in this Washington 7-Round 2021 NFL Mock Draft.

Texas doesn’t produce the same defensive back talent they did when they dubbed themselves “DBU.” However, Sterns is my favorite defensive back they’ve produced in years. Bursting onto the scene as a true freshman, Sterns displayed the range and instincts needed to be a superstar free safety in the NFL.

Injuries derailed Sterns’ next two seasons, but he’s an explosive athlete with excellent instincts and ball skills when healthy. In a defense already completely assembled playing in front of him, Sterns can run freely. He’d be in a position to get a few interceptions in his first year.

Washington lost Darby and Fabian Moreau in free agency. While they brought in Jackson III to be their top corner, they still lack depth at the position.

Thomas Graham Jr. was a longtime starter at Oregon. He was the nation’s active leader for pass deflections for over a year as well. He’s long, technically sound, and aggressive at the catch point. Graham is precisely the kind of depth a team like Washington needs on Day 3. He’s not going to get much better in the NFL, but he comes in as a capable player. Graham would be the team’s top backup cornerback as a rookie.

Josh Ball has great length, good hand usage, and overall technique, with a limited ceiling but a high floor. See a trend? Washington expects to compete for a playoff spot, which means using the draft to address depth issues logically.

While some teams will look to take physical specimens on Day 3 and hope they develop into reaching their full potential, Washington is playing it safe. They’re selecting players who fit their system and can produce immediately. You won’t find any accidental superstars this way, but you instead build a rock-solid foundation for your team.

Ball provides tackle depth and another young option to one day compete for the starting left tackle job.

One of the underrated needs for the Washington defense is the presence of a third edge rusher. Ryan Kerrigan looks to be leaving in free agency, though he hasn’t signed anywhere yet. Should they not re-sign Kerrigan, expect them to add a rotational pass rusher via the draft.

Coastal Carolina’s Tarron Jackson was a hot name before pro day testing, where he struggled. Jackson was the best player on a Coastal Carolina defense that was nasty to play. He was a Senior Bowl invitee as well and could pair nicely with James Smith-Williams. Jackson is the final selection in this Washington 7-Round 2021 NFL Mock Draft.