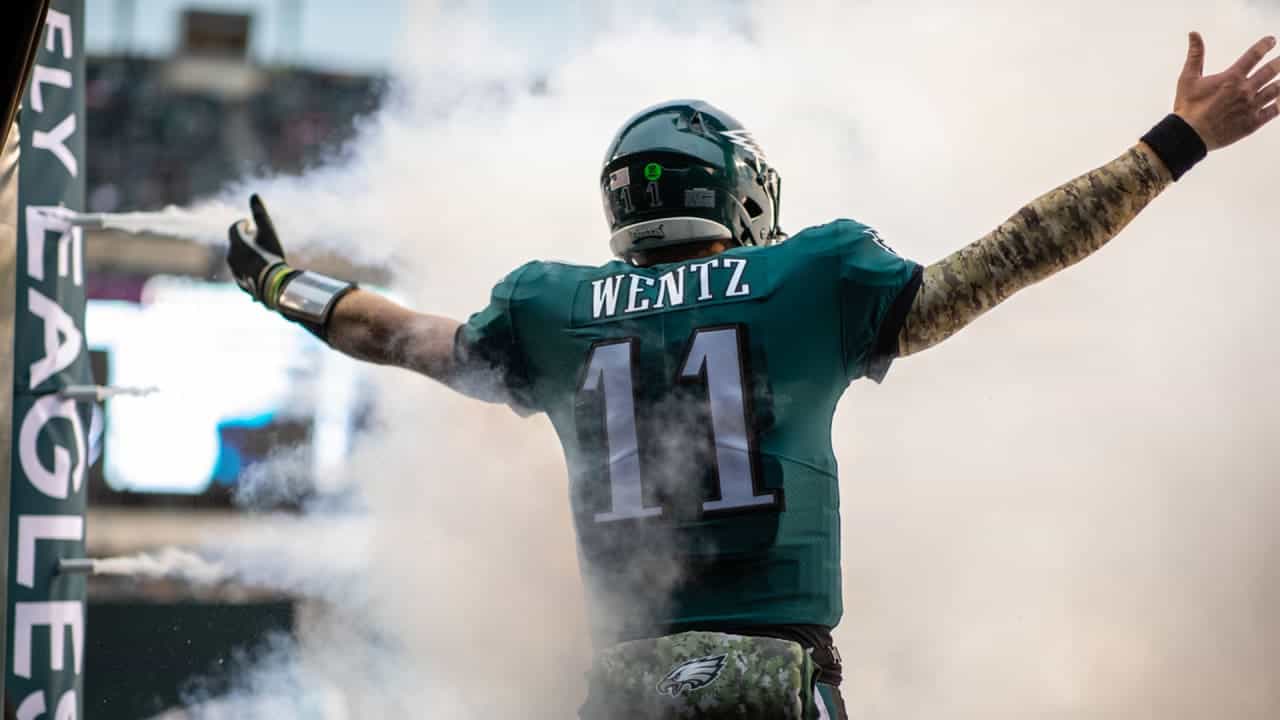 The Philadelphia Eagles reached the playoffs with a bunch of Lincoln Financial Field tailgaters playing wide receiver and running back for most of last season. So all head coach Doug Pederson has to do is plug first-round pick Jalen Reagor and other newcomers into the receiving corps, get DeSean Jackson back on the field after an, um, tumultuous offseason, and let Carson Wentz fire away, and they should coast back to the Super Bowl in 2020, right?

Not so fast. The Eagles have issues that extend far beyond last year’s injury crisis. They lack a proven edge rusher. Their secondary has been overhauled around newcomers Darius Slay and Nickell Robey-Coleman after two seasons of injuries and inconsistency. The offensive line suffered one major setback in the offseason and another in training camp. And Wentz’s annual late-season injuries contributed at least a little to the decision to draft dual-program dual-threat quarterback Jalen Hurts in the second round.

The Eagles should be pretty good. But “pretty good” won’t get them very far in a conference loaded with powerhouses.

The Philadelphia Eagles potential in 2020

Wentz stays healthy and returns to 2017 MVP-candidate form. The rebuilt receiving corps produces big plays while opening things up for tight ends Zach Ertz and Dallas Goedert. The combination of young defensive ends (Derek Barnett, Josh Sweat) and old (Vinny Curry, Brandon Graham) do enough to keep All-Pro defensive tackle Fletcher Cox from having to provide all of the pass rush. Jim Schwartz’s defense figures out how to get off the field on third-and-long. The Eagles win the NFC East and prove worthy rivals for the other conference contenders.

Another rash of injuries tears through the depth chart and all a third-straight 9-7 finish gets them in 2020 is a perfect spot in the Cowboys’ rear-view mirror.

Per Football Outsiders DVOA, the Eagles defense ranked 24th in the NFL on first downs, best in the NFL on second downs, and 22nd in third-and-long situations (20th on all third downs). Eagles fans howled every time Schwartz lined up all his defensive backs along the sticks on 3rd-and-10 and watched them surrender a 12-yard gain.

Slay and Robey-Coleman lead the deepest secondary the team has fielded in the Pederson-Schwartz era. All of that manpower might prompt Schwartz to be a little more creative when it’s time to get off the field.

The Eagles finished worst in the NFL in Football Outsiders’ Adjusted Games Lost (a stat which weighs injuries to starters more heavily than bit players) in 2018 but finished just 12th worst in the NFL last season.

Even at wide receiver, they only had the eighth-worst injury situation in the NFL. The Eagles’ receiver crunch last year was compounded by the fact that Nelson Agholor, Mack Hollins, and rookie J.J. Arcega-Whiteside all played poorly when healthy. New receivers coach Aaron Moorehead may be the team’s most important addition; youngsters like Arcega-Whiteside looked downright unprepared at times.

Reagor produced 11 touchdown plays of 20-plus yards from scrimmage and two punt return touchdowns in his last two seasons at TCU, but he will miss the first few games of this season with a shoulder injury.

Late-round draft picks John Hightower (18/5 yards per catch last season at Boise State) and Quez Watkins (18.4 yards per catch at Southern Mississippi) also have big-play capability, so Wentz won’t have to rely on the unreliable Jackson as his lone deep threat.

Alshon Jeffery spent training camp at his familiar position — the PUP list — but was activated during final roster cutdowns. Arcega-Whiteside earned positive camp reviews, and Greg Ward remains at the bottom of the depth chart if the Eagles need him to save the day again come December.

Andre Dillard was expected to take over at left tackle for Jason Peters before a season-ending training camp injury. Peters was expected to move inside to replace All-Pro Brandon Brooks (Achilles) at right guard; he could move back to left tackle, but he’s bristling about the switch after signing a one-year deal for guard money.

Long-term projects Matt Pryor and Jordan Mailata are Dillard’s likely replacements if Peters won’t budge. Center Jason Kelce and right tackle Lane Johnson still anchor their positions, but stability at left tackle is critical; you may never have heard this before, but Wentz gets hurt every once in a while.

Ertz was targeted 135 times, one target short of league-leading tight end Travis Kelce’s total. Goedert was targeted 87 times, the eighth-highest total in the NFL among tight ends. Kelce was actually targeted 150 times in 2018, so if either tight end is likely to see his workload reduced now that the Eagles aren’t getting their wide receivers from a temp agency, it’s Goedert.

Miles Sanders will be the Eagles’ featured running back this season, but street free agent Boston Scott scored four touchdowns on four carries inside the five-yard line late in the season. Jordan Howard handled most of the goal-line work before getting injured last season. Don’t be surprised if Sanders gets leeched badly if Pederson thinks other backs are more capable near the goal line.

Hurts rushed 55 times in the red zone last year for Oklahoma and scored 17 red zone rushing touchdowns. A goal-line Wildcat package is possible. This is the team that dreamed up the Philly Special, after all.

Will the new wide receiver corps be enough?

In many ways, the Eagles’ MVPs in the post-Super Bowl years haven’t been Wentz, Cox, or Ertz, but former Cowboys coach Jason Garrett, Giants general manager Dave Gettleman and Football Team owner Dan Snyder. Despite injury disasters, an ever-tightening cap crunch, some draft whiffs, and a little coaching brain drain, the Eagles have gone 9-3 in the NFC East over the last two seasons (with a 6-1 divisional in December), and 9-7 has been good enough to reach the playoffs for two straight years.

With Garrett gone and the Cowboys roster stacked, there’s no way 9-7 will be good enough for the NFC East title, and it’s unlikely to net a Wild Card berth in a crowded field. And despite some additions and the promise of better injury luck, the Eagles appear too young at some positions, too old at others, and too ordinary at a few of the rest to be much more than a 9-7 team right now.