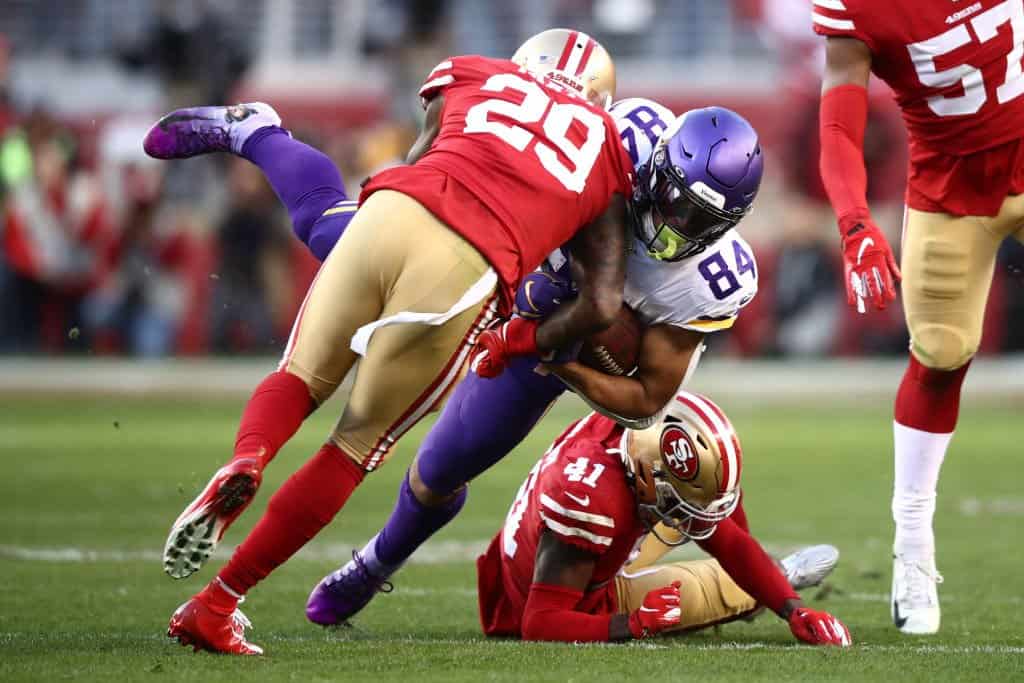 SANTA CLARA, CALIFORNIA - JANUARY 11: Irv Smith Jr. #84 of the Minnesota Vikings is tackled by Jaquiski Tartt #29 of the San Francisco 49ers after a catch during the second half of the NFC Divisional Round Playoff game at Levi's Stadium on January 11, 2020 in Santa Clara, California. (Photo by Ezra Shaw/Getty Images)
What's in this article? Click to show
Week 15 Waiver Wire: Quarterback pickups to target for your fantasy team
Running back waiver wire pickups to target in Week 15
Wide receiver fantasy football pickups in Week 15
Week 15 tight end waiver wire pickups
Want more fantasy football analysis and news?

After an eventful first week of fantasy football playoffs in Week 14, those lucky enough to advance to the next round need every advantage they can get. In a do-or-die situation for all teams now, the push to round out rosters and replace injured players is that much more important. We’ll talk about the waiver wire pickups to target for Week 15, including Eagles’ quarterback Jalen Hurts and Vikings’ tight end Irv Smith Jr. Let’s look at them as well as the other waiver wire targets to put claims in for this week.

Going up against arguably the best defense in the NFL in his first career start, Hurts played well. While he only completed 17 of his 30 passes for 167 yards and a touchdown, he did most of his damage on the ground. Hurts had 18 carries for 106 yards against one of the best teams in the league.

Hurts made a difference on offense and helped Miles Sanders have one of his best games of the season as well. He has an easier schedule going forward with the Cardinals and Cowboys on tap over the next two weeks. He’ll be a low-end QB1/high-end QB2 unless the Eagles somehow (foolishly) go back to Carson Wentz. Hurts is one of this week’s top waiver wire targets.

Even without DeVante Parker and Jakeem Grant for most of the game, Tua had a terrific Week 14 showing against the reigning Super Bowl champions. He threw for a career-high 316 passing yards and two touchdowns with 24 yards rushing and a touchdown on the ground as well. Tua has been playing better as of late, with over 600 passing yards and four total touchdowns in his past two games. He now faces a Patriots defense that has been hot-and-cold as of late. With the Dolphins looking to lock up a wild-card spot, expect them to pull out all the stops in Week 15. Therefore, Tua will be a high-end/mid-tier QB2 this coming weekend.

Running back waiver wire pickups to target in Week 15

In a season where Ezekiel Elliott has been disappointing for most of it, Pollard continues to make the most of his limited opportunities. He actually out-touched Elliott 14-13 in Week 14 and scored a receiving touchdown as well. Pollard looks like the more explosive player of the two and surely will see more work going forward. He isn’t someone to go and start in Week 15, but between Pollard seeing more work and Elliott dealing with some injuries as of late, we could continue to see more of an even split going forward. He’s a low-end RB3 with a lot of upside in Week 15.

After being drafted in the third round of the 2020 NFL Draft by the Raiders, Bowden was traded to the Dolphins before ever taking a snap for Los Angeles. He hadn’t seen much action this season, but with Myles Gaskin, Matt Breida, and Salvon Ahmed all inactive, plus Parker and Grant leaving with injuries, Bowden stepped up.

While he only had one carry, he saw nine targets and caught seven of them for 82 yards. Bowden’s value in fantasy football going forward will depend on the statuses of the numerous injured/unavailable players for the Dolphins. But he could be a worthwhile pickup with his dual RB/WR eligibility going forward.

Wilson has been averaging over 10 offensive touches per game in the last three weeks. He has been the 49ers’ 1B running back to 1A in Raheem Mostert. Wilson would end up scoring a rushing touchdown against a stout Washington defense and now has a porous Cowboys run defense on tap in Week 15. In the run-heavy offense of the 49ers, Wilson has weekly RB3/FLEX potential in fantasy football and would instantly be a high-end RB2 should Mostert miss time. With Mostert’s injury history this season, it’s no sure thing that he will continue to stay healthy either.

Johnson had mostly been utilized as a big-play option, targeted once or twice a game this season. He’s made some big plays for the Chargers but had only one game of more than one target heading into Week 14. With Mike Williams exiting early with a back injury, Johnson stepped in as the team’s number two wide receiver. He finished fourth on the team with seven targets and caught six of them for 55 yards and a touchdown. With the Chargers on short rest going into Week 15 on Thursday Night Football, Williams may not be ready. If that is the case, Johnson has WR3/FLEX appeal in the high-powered Chargers offense.

After pulling in five receptions for 101 yards on seven targets in Week 13, Hansen had another strong game. He led the Texans in targets (seven), receptions (seven), and yards (56), operating as a starter. With Brandin Cooks being inactive, Hansen was a near every-down player and caught every pass thrown his way. Despite facing two tough defenses in the Colts and Bears, Hansen has put up very solid fantasy football numbers. He now faces a Colts defense against which he had 101 yards in Week 13. He’ll be a mid-tier WR3/FLEX if Cooks misses another game.

The Jaguars finally made a change at quarterback and placed Gardner Minshew back in as the starter. Shenault benefitted from this to the tune of a career-high 11 targets in Week 14. While he only came away with six receptions for 49 scoreless yards, his target share was encouraging. Shenault’s scoring upside will be capped in the porous offense that the Jaguars have, but he has plenty of upside. He’s a mid-tier WR3/FLEX option for Week 15 despite a tough matchup with the Ravens.

After missing the past two games, Irv Smith Jr’s return to the lineup was welcome for a Vikings team fighting for the playoffs. Despite the loss, Irv Smith Jr led the team in receiving with 64 yards and a touchdown. Kyle Rudolph was inactive due to injury, and Irv Smith Jr stepped in as the starter. If Rudolph were to miss more time, Smith would find himself as a top-12 option at tight end. Irv Smith Jr now faces a Bears defense that has been vulnerable against tight ends in fantasy football. He is one of the top waiver wire pickups this week.

Kmet has seen seven targets in two straight games as the Bears try to incorporate him more into their offense. In Week 14, he turned that into nine receptions, 78 yards, and a touchdown. Beyond Allen Robinson and David Montgomery, no other player on the Bears offense has stepped up as a top option. Therefore, this could be the beginning of Kmet returning dividends as a second-round pick. He’s a top-15 option moving forward with plus matchups in the Vikings and Jaguars on tap.