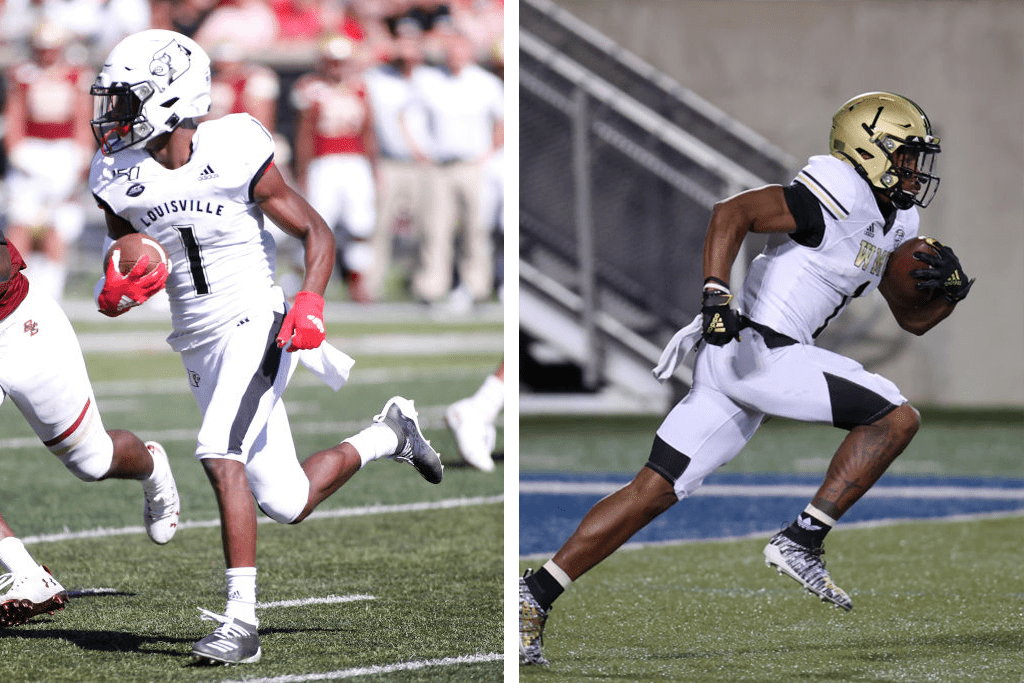 The 2021 NFL Draft boasts a deep and talented pool of wide receivers. As such, there are bound to be discussions and debates about the ranking of these players. Obviously, the top of this class — Ja’Marr Chase, DeVonta Smith, and Jaylen Waddle — is hotly debated, but the discussion about the middle and bottom-tiers is just as fierce. I have graded 55 wide receivers in this class, and it’s incredibly talented. Two guys in that next tier below the elite are a couple of speedsters in Louisville’s Chatarius “TuTu” Atwell and Western Michigan’s D’Wayne Eskridge. I’ve studied both of these players, and while they are exciting playmakers, each comes with their own concerns. In a battle of Atwell vs. Eskridge, which one should be drafted first?

WMU’s D’Wayne Eskridge is a vertical threat in every sense of the word. That showed up in his 4.40 40-yard dash at his Pro Day this spring. He followed that up with an elite 10-yard split of 1.51 seconds, which earned him a 9.68 grade in that section of his Relative Athletic Score (RAS). Eskridge threatens corners immediately and practically demands cushion from defensive backs. Incredibly, he recorded a catch of at least 47 yards in every game this season.

Eskridge played both corner and receiver in 2019 before transitioning back into a full-time wideout role in 2020. His physicality from playing both ways often shows in his game.

Players in the MAC simply couldn’t catch him. Eskridge is not an elite route runner, but he owns solid quickness in the open field and separates well. After the catch, Eskridge’s background as a running back shows up. He’s a compactly built receiver, and he forced several missed tackles in the open field.

Don’t pencil him in too high

As with everything in life, there are plenty of negatives to go along with Eskridge’s positives. At 24 years old, he’s an older prospect. In fact, Chris Godwin, who has played in the NFL for four seasons, is just a year older than Eskridge. As fast as he is, his age will be a worry in terms of draft value.

Eskridge’s frame will also bring its fair share of concerns. A past collarbone injury in addition to his slight frame will raise questions about his durability. Durability concerns and an older age take him out of most analytics-based front offices right away. As such, there will be a plethora of teams who will have Eskridge off of their boards entirely.

As I mentioned above, Eskridge isn’t an elite route-runner. Much like Florida’s Kadarius Toney, Eskridge tends to telegraph his routes with his footwork, and he’ll try to create his own route too often. With his frame and inability to manage in tight, contested coverage against larger defenders, he’ll be forced into the slot. He does a good job attacking with his frame, but he’s only so big as a human.

There’s a lot of buzz about Eskridge going potentially top 50, but he doesn’t seem to have the profile that would suggest that, especially in such a talented receiver class. Historically, his profile sets off alarms. Here is a list of every WR from 1987 onwards who measured in at 5080 to 5086 and 185 to 190 pounds.

Only five of these players have been drafted, and only Andy Isabella, Tyreek Hill, and Eskridge ran a 40-yard dash at or below 4.40.

This Cardinal can fly

Turn on any game of Louisville’s Tutu Atwell, and you’ll see him fly around the field. Atwell was at a different speed from the rest of the ACC this season. He, quite simply, flies vertically downfield. When Atwell sees a free release, defenses can forget trying to catch him. His speed after the catch is like watching an action movie where the hero’s car out speeds all the bullets flying at them.

Louisville utilized Atwell in a variety of ways. They employed all sorts of underneath concepts like pop passes, WR sweeps, screens, and shallower routes to get him the ball in space.

Atwell’s profile is not that outstanding

Atwell’s game has some pretty significant holes in it. Much like Eskridge, Atwell’s size is a glaring limiter to his potential. He gets knocked off routes frequently by contact, and his 5 career fumbles are proof of that. He isn’t an astute route-runner as a result. Part of the reason Louisville gave him so many easy concepts was because he couldn’t run a standard route tree against capable corners.

Unlike Eskridge, Atwell struggles at catching passes outside of his frame. Too often, he’ll let the ball hit his frame instead and has to double-catch. Coupled with his contact issues, Atwell doesn’t project into any role outside of the slot. He has to be given a free release and easy ways to receive the ball. Otherwise, he’s going to struggle to make an impact.

Just two receiver in the RAS database came in at 5080 to 5090 and 155 pounds. One of them is Tutu Atwell. Surely, that frame is going to raise eyebrows about his durability at the next level. Particularly, when compounded with a stress fracture in his back he suffered last season.

There is plenty to like about Atwell’s athleticism and playmaking ability. On the other hand, his whole profile is in an area with a microscopic success rate.

Atwell vs. Eskridge: Who would I draft first?

Both of these players are thought of in similar areas as prospects. Each seems likely to go in the range of Round 3 or Round 4. Atwell and Eskridge have significant risks in their profile; Eskridge with his age, and Atwell with his frame and hands. However, it’s impossible to deny their playmaking ability and explosiveness.

So, the question remains: Who would I draft first?

I believe Atwell is faster than Eskridge by a hair and also much quicker in space. That was my impression on film, and it was backed up by testing. Yet, Eskridge came in 35 pounds heavier than Atwell. I also believe Eskridge, while not perfect in this area, is a better route-runner and deals with contact much better than Atwell.

Ultimately, despite his age, I feel like Eskridge offers the better package. While he isn’t nearly as fast or twitchy as Atwell, you don’t sacrifice anything as a route-runner, and Eskridge provides more confidence catching the football. After all, the speed only matters if the receiver can come down with the reception.

As such, I would draft Eskridge over Atwell.

Next Article: Justin Fields vs. Mac Jones: Which QB will be drafted first?