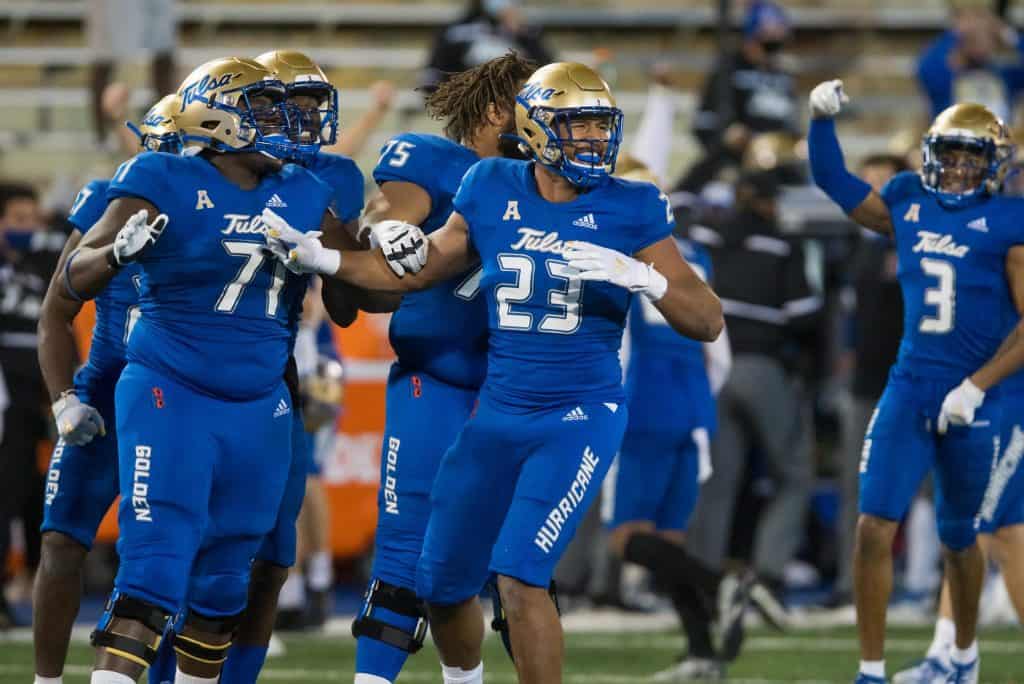 A pro day in Tulsa, Oklahoma, may not normally have prospects that garner our attention, but 2021 is a different beast. This team, and more specifically this defense, has an ace up its sleeve. See, they have a linebacker who looks like your one friend who peaked earlier than everyone else on the peewee team. He stands out like a sore thumb, seemingly a head taller and a lane wider than both his teammates and his opponents. Tulsa’s Zaven Collins is one of the more unique NFL Draft prospects in the entire game.

Well, this is kind of it in terms of “top” prospects. But as a bonafide top-50 prospect in the 2021 class, Zaven Collins is worth a bit of extra time to get to know intimately. His performance at the 2021 Tulsa Pro Day could go a long way toward regenerating some of the buzz he once possessed.

Tackles are awesome. However, citing tackles to describe the positive impact a linebacker has on a team is like saying an employee works 65 hours a week — it’s an opportunity (or necessity) stat.

An analytical approach to linebacker play consists of looking at production in the backfield and coverage. Obviously, scheme and usage rate also impact production, but that’s only answered by watching the film.

Collins produced 7.5 tackles for loss in 2020 during his eight-game season. That wasn’t all he did in the backfield, however, because his 4 sacks show that he’s not simply an off-ball linebacker.

In fact, the most impressive statistic of his came in coverage. He tallied 4 interceptions during the season and tacked on 2 more passes defensed. Zaven Collins filled up the stat sheet like a nose tackle does his dinner plate. He will appear natural during the coverage-drill portion of the 2021 Tulsa Pro Day.

As previously stated, Collins’ size doesn’t really make sense. At 6’4″ and 260 pounds, with arms that hang like battle ropes, his frame is reminiscent of a defensive end more than that of a linebacker. Whereas most linebackers have more angular builds, with wide shoulders, a smaller waist, and thick legs, Zaven Collins is built like a refrigerator. Without pads on during the 2021 Tulsa Pro Day, his frame should appear even more impressive.

The Tulsa prospect needs to show out because the pro day testing numbers have appeared…enhanced…during the 2021 cycle. In fact, we’re seeing more 9.00+ relative athletic scores than in the past.

With Nick Bolton‘s middling results during his testing, Collins could seize the opportunity of being the third or even second linebacker drafted. His short-area burst and ability to navigate through tight spaces pop up often as a run stopper and in coverage.

Collins’ top gear isn’t anything to write home about, but his size-adjusted speed should be fine. The question will be, how does he change direction? If his three-cone and short shuttle are average to good for the position, it would, in theory, provide a base to work through at the next level. Because if there is one question surrounding his athleticism, it’s how will a player of his size and frame move laterally. Tony Pauline annotated this in his evaluation of Collins.

Where is Zaven Collins’ best fit?

Although I think he can survive and even potentially thrive as a traditional off-ball linebacker, I believe Zaven Collins’ best fit would be as an outside linebacker in an odd front. Collins possesses legitimate pass-rush chops and would still play off the ball and in coverage often, depending on his deployment.

As a pure down-to-down processor, he isn’t the most consistent player. He could struggle as a MIKE or WILL in even front looks if he pairs those intermittent studders in processing with below-average agility. This will also keep him away from having to make super-rangy plays from the middle of the field as often. At the 2021 Tulsa Pro Day, his weight and athletic testing should answer some questions about where teams view him.

Zach Smith is the traditional “pro-style” quarterback. He possesses the prototypical size of an NFL QB at 6’3″ and 227 pounds. The redshirt senior quarterback has the physical tools as a passer to develop into an NFL player.

The Baylor transfer actually got some decent playing time as a freshman and sophomore in Waco. Yet, he decided to take his talents to Tulsa after up and down results. Smith’s toughness as a player definitely stands out. He hangs in the pocket for a long time to deliver passes downfield. Some of the hits he takes, though, will make you cringe.

Nevertheless, Zach Smith fits perfectly in an Air Coryell offense, given his arm strength and willingness to let downfield concepts develop. He must, however, work to become more consistent as a passer. If he impresses at Tulsa’s 2021 Pro Day, he might sneak his way late into the Day 3 range.

Keylon Stokes was a productive receiver for Tulsa, but his projection as a pro is not clear. Stokes is a good separator with reliable hands, but he will not impress physically during the 2021 Tulsa Pro Day. He, like Smith, will probably need to produce better numbers than expected to find his way into the Day 3 range. At any rate, teams will like his reliability.