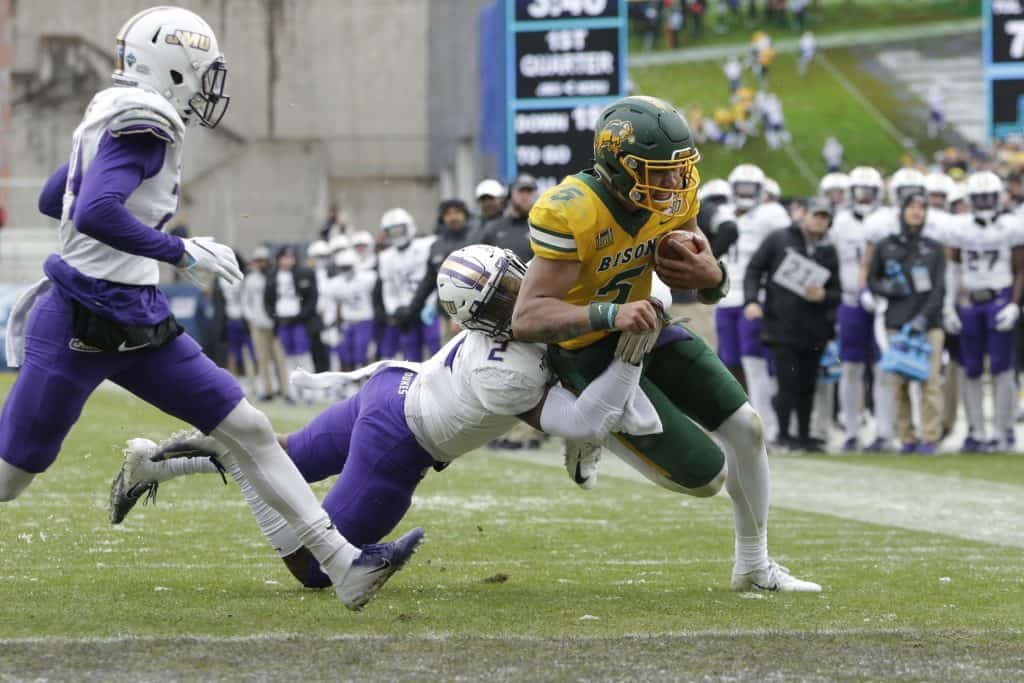 Trevor Lawrence appears to be the consensus QB1 in the 2021 NFL Draft. Behind him, Zach Wilson and Justin Fields appear locked in a constant battle for QB2. But there’s one more quarterback prospect who deserves the top-10 talk, and that’s North Dakota State quarterback Trey Lance. Lance may have slipped in the eyes of some, but he’s still a supremely talented player with franchise potential. With this in mind, what is Trey Lance’s draft projection, and what are some of the top landing spots to consider?

Following up Carson Wentz at North Dakota State is a scary proposition. Yet, Trey Lance made it look easy. After completing 192 of 287 attempts for 2,786 yards and 28 touchdowns as a redshirt freshman, Lance caught the eye of NFL scouts as a top-tier NFL Draft prospect in 2021.

Excitement built early for his 2020 campaign, as he became draft-eligible. However, unforeseen circumstances would place the fall FCS football season in jeopardy and complicate Lance’s college career.

The FCS fall season was ultimately canceled, but Lance was able to play in a one-game showcase against the Central Arkansas Bears. In that game, Lance completed 15 of 30 passes for 149 yards, 2 touchdowns, and the first interception of his collegiate career. He also ran for 143 yards and 2 touchdowns on 15 carries.

It wasn’t a perfect game for Lance, but it did more than enough to solidify his reputation as a prospect with tremendous upside. Even now, his skill set remains in high regard.

Revisiting what makes Lance such an exciting player

It’s rare for quarterback classes to have such a promising pool of top-end talent. After the top five, the 2021 NFL Draft’s quarterback group falls off, but the early options all have exceptional physical qualities. Lance is a part of that group. The North Dakota State quarterback has elite athleticism and arm strength, and his running abilities add an extra dimension to his game. This quote from Trey Lance’s NFL Draft profile does well to sum up his pallet of traits.

“Lance moves with awe-inspiring ease for his 6-foot-4, 226-pound frame. As a runner, he carries a lot of momentum and physicality, and he can explode upfield if given space. As a passer, his mobility allows him to evade pressure and create off-script. He has the arm strength to push the ball downfield and hit closing windows outside the hashes. He also has the arm elasticity to mix touch into his throws when necessary, and he can hit different angles with that elasticity. His accuracy can wane at times, but this is largely due to slight mechanical variances.”

Even taking the qualms surrounding his lack of experience and FCS competition level into account, Lance is a dynamic player with an impressive amount of mechanical instinct and visible smarts for his age. He’s also been working with private coach Quincy Avery this offseason, the same coach who’s elevated players like Deshaun Watson.

Since draft picks are ultimately investments, Trey Lance’s draft projection is a promising one. A lot hinges on his eventual destination, but he should be able to thrive in the right spot. That, of course, begs another question — where could the right spot be? Let’s take a look at some of the most compelling destinations.

Sitting at No. 8 overall in the second year of Matt Rhule’s tenure, this is one of the most popular fits for Trey Lance. Lance is talented, but because he comes from the FCS unlike his fellow top QBs, there is a heightened degree of projection, regarding his transition.

Assuming Teddy Bridgewater stays in Carolina for 2021, Lance would be able to sit and learn behind Bridgewater, and the Panthers would be able to ease him into action. He’d also get some experience with an excellent young offensive mind in Joe Brady, who’s already proven he can tailor an offense to a quarterback’s strengths.

When Lance inevitably takes the starting job from Bridgewater in this scenario, he’d provide Carolina with much more dynamic ability at quarterback. He’s already an impressive intermediate and deep thrower, and learning from Bridgewater could help him increase his efficiency in the short ranges as well.

Carolina has some maintenance to perform with their supporting cast. The fates of players like Curtis Samuel and Taylor Moton remain up in the air this offseason. Nevertheless, D.J. Moore, Robby Anderson, and Christian McCaffrey would make Lance’s job easier right out of the gate.

One of the biggest criticisms surrounding disillusioned 49ers QB Jimmy Garoppolo is that he didn’t provide the necessary deep passing ability for San Francisco, and didn’t move the needle when needed. Trey Lance would help fix that problem for Kyle Shanahan and the 49ers. Like Carolina, this is also one of the more exciting landing spots for Lance. It all revolves around the support system in place.

San Francisco has a nice supporting cast already, pending a few offseason moves to solidify the line. Additionally, Shanahan is known for his ability to maximize quarterbacks. Imagining Lance maximized, he’s near the top end of the spectrum when it comes to potential returns.

Lance has the traits to thrive off-platform in Shanahan’s play-action-heavy offense. He’d potentially have to start early, but he’d have the support and the traits necessary to withstand adversity.

Sitting at No. 4 overall, with a new regime in place, the Falcons are almost guaranteed to have their pick of the third and fourth quarterbacks off the board. There’s a chance a team trades up to No. 3. However, historically, it’s incredibly rare for three quarterbacks to go in the first three picks.

Consequently, Atlanta may have a choice between either Zach Wilson and Trey Lance, or Justin Fields and Trey Lance. In both scenarios, Lance is a compelling option — by virtue of his own talent, and his fit within the Falcons’ new system.

New Falcons head coach Arthur Smith helped revitalize a somewhat similar quarterback in Ryan Tannehill. He forged a well-balanced offense around the former first-round QB. While Lance has tremendous development to undergo before he reaches the current level of Tannehill, Lance is a better athlete and a more physically talented player overall.

Seeing that Tannehill himself is an exceptional athlete at quarterback, that’s not a statement to take lightly. Lance’s physical gifts project extremely well into Smith’s offense, and Lance’s multifaceted ability would help compound the benefits of that scheme. Plus, Lance would be able to sit and learn from Matt Ryan. That’s not a bad gig.

2020 was the Patriots’ first season without Tom Brady since the turn of the millennium, and it showed. Trey Lance would provide New England with a nice, high-upside quarterback with which to grow. Additionally, Bill Belichick and Josh McDaniels showed they could change their offense for Cam Newton in 2020. Thus, Lance’s running ability could be adequately incubated.

Having said that, New England drastically needs to improve their supporting cast, which is currently one of the worst in the league. If they can do that, Lance could eventually get them back to the Super Bowl.

Of course, Lance is linked with the Patriots the least in mock drafts among these teams. There’s a reason for that. Due to the fact that the Patriots pick at No. 15, chances are high that they’d have to trade up to acquire Lance. Most of the other teams on this list are already in good position. Therefore, because Lance is such a talented player, it might cost New England a little extra if they’re set on acquiring him. That’s why it’s not as likely of a landing spot for Lance.

It remains to be seen how the Lions will approach their newfound union with Jared Goff. On one hand, it seems possible that Dan Campbell could choose to conserve his first-round pick and attempt to strengthen Goff’s supporting cast instead. On the other hand, Trey Lance’s draft projection might be too enticing to pass up for Detroit, who risks falling into quarterback purgatory with Goff.

Detroit doesn’t offer a great supporting cast at the moment. However, with Goff in tow, Lance would be able to ease into action. Additionally, Lance would have experienced offensive mind Anthony Lynn as his coordinator. He’d also have three-time Pro Bowler Mark Brunell as his quarterbacks coach.

The Lions present one of the more uncertain landing spots for Lance. Nevertheless, the last time they banked on a quarterback with the necessary traits in Round 1, it worked out well.

Trey Lance is most often considered to be in the QB4-QB5 range this offseason. Thus, the potential range of outcomes is higher for him than those ahead of him. These five teams represent some compelling landing spots for Lance, but in truth, the probabilities extend even beyond that. Will he endear a team picking later to his talents at his pro day on March 12? Lance’s stock remains in flux, and even within one round, the possibilities are always multiplying.