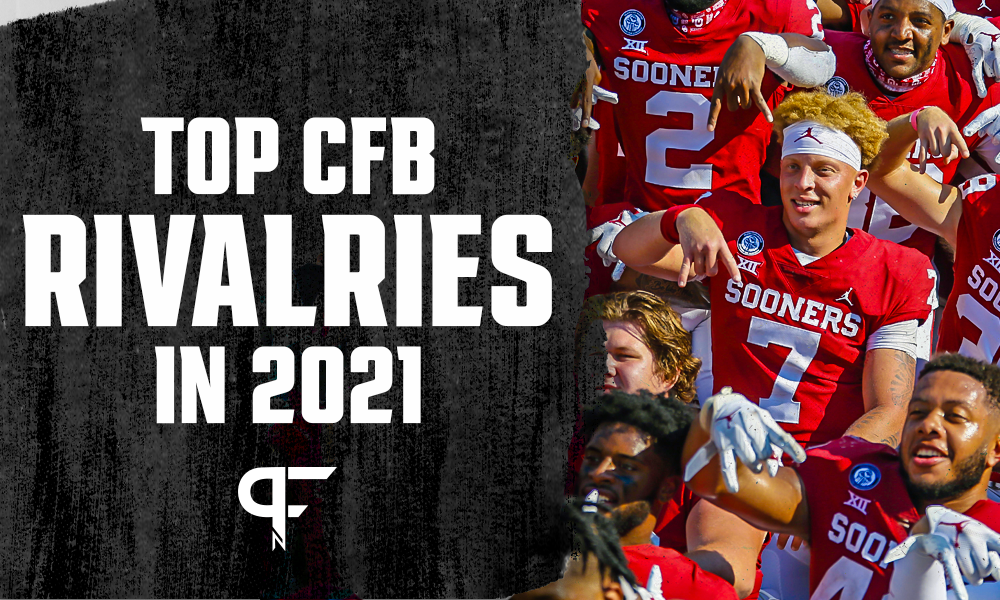 Football on Saturdays — and some weekdays mixed in — is just around the corner. And with it comes a multitude of the greatest rivalries in all of sports. Not only do the games themselves bring immense emotional fanfare, but many of them own incredible names. So, as the 2021 season draws near, we ranked the top 15 rivalries in college football.

Recent matchups, the last time the game was played, and one team dominating the rivalry weighed heavy on these rankings. As a result, you won’t be seeing rivalries such as Oklahoma-Oklahoma State (the Sooners own a 90-18-7 record in the Bedlam) or Texas-Texas A&M (the two haven’t met for a Lone Star Showdown since the Aggies left for the SEC).

Two words — Kick Six. The Iron Bowl is the battle between two of the most storied college football programs in the nation. Both sides boast NFL legends, Heisman winners, and national championships — although Alabama’s 13 since 1950 far outweighs Auburn’s two. The Crimson Tide holds a 47-37-1 record in the series as each team has fought every year since 1948. The two will meet once again in the final game of the 2021 regular season.

If you are an Alabama native, nearly nothing else matters on Thanksgiving weekend.

The two teams in this rivalry have reportedly reached out to the SEC about possibly joining the conference in the future. Reports and rumors aside, Oklahoma and Texas first played in 1900, making it one of the oldest standing rivalries in the sport. Despite the Sooners winning 15 of the last 22 matchups since 2000, the Longhorns hold the series lead at 62-49-5.

The Red River Showdown features the Big 12’s two foremost competitors, with Oklahoma owning the most conference championships (14) and Texas coming in as a distant second (3).

This game earned its own weekend in December after the regular season has already concluded for the rest of the country. College football has more tradition and pageantry than some give it credit for, and both are on full display in this here. The Commander-in-Chief’s Trophy is up for grabs when Army, Navy, and Air Force play each other, giving this game even more significance.

One of the best nonconference rivalries in college football, USC-Notre Dame has provided iconic moments such as the 2005 “Bush Push” and the 1977 “Green Jersey Game.” Although this game doesn’t offer conference championship implications, there has been no shortage of postseason rights on the line. In fact, there have been 28 times in which the winning team was ranked in the top five since the rivalry’s first game in 1926.

The match was sorely missed last season due to the pandemic, but the Fighting Irish will host the Trojans this season on October 23. Notre Dame has reigned victorious in the last three bouts and owns the series lead at 47-36-5.

Who are the two teams that possess the most Big Ten titles in the conference’s history? You guessed it; Michigan (42) and Ohio State (39) — the next closest is Minnesota with 18.

Even though Ohio State has run away with the series — winning eight straight from 2012-2019 — the Game is must-watch TV. To add salt to the wound, the Buckeyes dropped 62 and 56, respectively, in their last two scuffles with the Wolverines. There is a reason Jim Harbaugh feels the entire weight of Michigan on his shoulders when they face off (Harbaugh is 0-5 in the rivalry).

Furthermore, the Wolverines’ last victory occurred in 2011, with the one before that coming in 2003. They need a win in 2021 for this to be a rivalry and not just a scrimmage for the Buckeyes. Still, despite Ohio State’s recent dominance, Michigan has a seven-game lead against their rivals (58-51-6).

With the top five out of the way, which college football rivalries fill out the list?

So, this game isn’t technically supposed to be called the “World’s Largest Outdoor Cocktail Party” anymore, but how could you dismiss one of the greatest nicknames ever? Political correctness caused the schools and major publications to drop the moniker in the 1980s. But the name was originally coined by Bill Kastelz —  a sports editor at The Florida Times Union — in the 1950s.

UF doesn’t acknowledge that loss as the university was moved from Lake City to Gainesville, but UGA won’t let that slide. Georgia historian Dan Magill stated, “We can’t help it if they got run out of Lake City.” Each team has endured its fair share of ups and downs in the series, but the Bulldogs hold an eight-game advantage (52-44-2).

Whether Miami-FSU is played in Miami Gardens or Tallahassee, there are sure to be fireworks. While the intensity has waned in recent years, the height of the rivalry reached near unmatchable levels in the 1980s and ’90s. Jimbo Fisher led the Seminoles to seven straight victories from 2010-2016, while the Hurricanes have won the four battles since.

In 2021, quarterback D’Eriq King and Miami hope to keep the streak alive. At the same time, FSU signal-caller McKenzie Milton looks to knockoff the Canes and prove he is still a top-tier talent after a devastating knee injury at UCF in 2018.

Although FCS football does not receive the love it deserves, it is home to one of the greatest college football rivalries of all time. When thinking of Ivy League schools, I guarantee the first thing that comes to mind is academics, not football — or sports in general.

Yet, The Game is the apex of the season for Harvard and Yale. The two squads have duked it out since 1875 when Harvard beat Yale in exhilarating fashion, 4-0. Yes, that was the final score of a football game, not soccer or baseball; what a time to be alive. Their most recent matchup was quite the opposite of their first, as Yale took home the win in 2019 after a double-overtime 50-43 dogfight. Additionally, Yale owns the all-time lead 68-60-8.

While Harvard-Yale may not cause trembles, it is one of the oldest and most iconic rivalries in college football.

The winner of the Sunshine Showdown earns the Makala Trophy, but both teams only care about another mark in the win column. This rivalry reached its pinnacle in the 1990s with Florida State’s Bobby Bowden (stay strong, coach) and Florida’s Steve Spurrier handling the reigns of each program. The two met in the Sugar Bowl in 1995 and 1997, with the teams splitting the matchups. The Gators and Seminoles will square off in Gainseville to end the regular season, with both teams seeking to prove their dominance in the state of Florida.

Oregon’s rise to national stardom in the 2010s has raised the level of importance of their rivalry with Oregon State. While the Ducks have largely owned the matchup (66-48-10), the Beavers have won two of the last five games, knocking off Oregon 41-38 in a thrilling contest last season. With the Ducks undergoing another transition under center, could Oregon State beat their in-state and Pac-12 rivals for the second year in a row for the first time since 2006-2007?