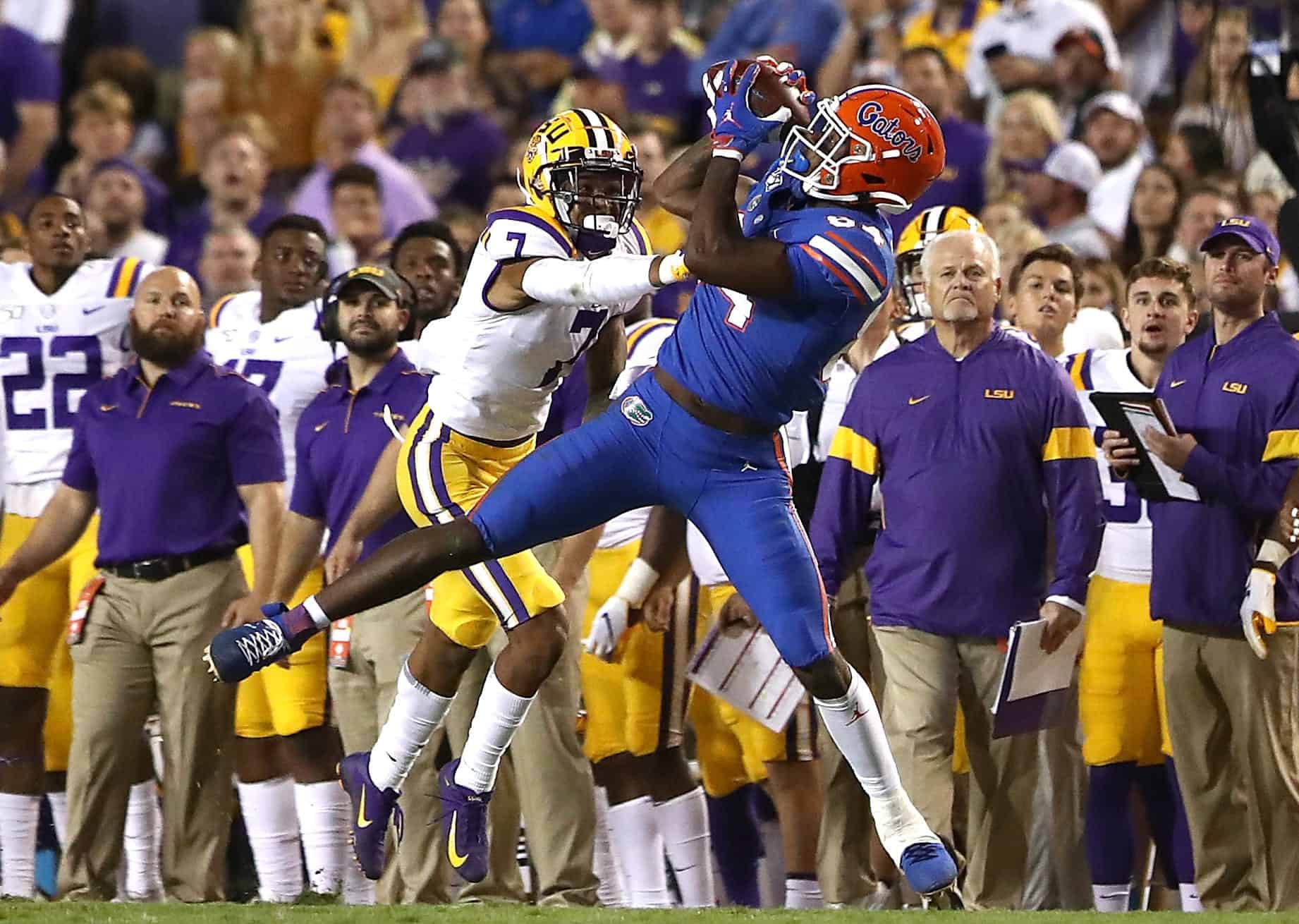 We are still a few months away from the start of the college football season, but it is never too early to start circling premier matchups on the calendar. Are Trevor Lawrence and the Clemson Tigers bound for another national championship run in 2020? Can the Alabama Crimson Tide avenge last season’s loss to the LSU Tigers? Not only will there be battles between top college football programs, but there will also be can’t-miss matchups between top draft prospects.

It will be an epic battle when “CB1” Patrick Surtain II matches up with  “WR1” Ja’Marr Chase on November 7th, 2021 at Tiger Stadium. Head coach Nick Saban and the Alabama Crimson Tide will be looking to get a measure of revenge, after being slain by Joe Burrow and the LSU Tigers last season. This key matchup will surely have national championship ramifications.

Surtain II has prototypical size, standing at 6’2″ and weighing in at 203 pounds. His long, muscular frame allows him to match up with big-bodied, physical receivers. He is sticky in coverage and possesses elite ball skills. When it comes to cornerbacks possessing the ability to locate the football, Surtain II is the best in the class. Against LSU and Chase, he’ll need these skills more than ever.

Make no mistake about it: In an extremely talented 2020 wide receiver class, Chase is the prize. The reigning Biletnikoff Award winner, Chase is a savvy route runner, which allows him to consistently find open space against zone defenses. He has some of the best hands we’ve seen in recent years and his ability to high point the football leads to him consistently winning the contested catch.

We’re talking about a player whose ridiculous 2019 stat line consisted of 84 receptions for 1,780 and a mind-blowing 20 touchdowns. In last year’s matchup against Alabama, Chase went off for 140 receiving yards and a touchdown, while averaging 23.3 yards per catch.

The matchup between Surtain II and Chase will feature two of the best ten 2021 NFL Draft prospects. While Chase got the better of the Alabama secondary last season, this year could be quite different, as quarterback Myles Brennan is quite the step down from the 2019 Heisman winner Burrow. This top college football matchup between two elite players is one I am anticipating most in 2020.

The October 10th, 2020 matchup between the Florida State Seminoles and Clemson Tigers will have Doak Campbell Stadium rocking. Clemson surely looks to be the class of the ACC heading into the 2020 season, as Florida State should be much improved as well.

Clemson was dealt a huge blow last week with the news that their talented wide receiver, Justyn Ross, will miss the 2020 season after neck surgery. Even if healthy, it wasn’t a sure bet that Ross was the best receiver in this showdown, as Florida State’s Tamorrion Terry is a monster.

Terry is physically imposing, standing 6’4″ and weighing in at 210 pounds. While there are facets of Terry’s game where he is a bit raw, he brings a highly intriguing skill-set to the table. He is an alpha at the position, highlighted by his nature to fight for the football when it is up for grabs. He provides a remarkable catch radius and can make defenders miss in the open field.

Like Terry, Derion Kendrick, a former wide receiver, possesses impressive size, standing 6’0″ and weighing in at 190 pounds. He is among the top cornerback prospects in the ACC, sharing that crown with the likes of Caleb Farley (Virginia Tech) and Asante Samuel Jr. (Florida State). At times in 2019, Kendrick displayed lockdown cornerback potential, and he could be the next great Clemson cornerback prospect. He has good balls skills, moves with great fluidity, and plays with outstanding confidence.

The battle between one of the ACC’s top wide receiver prospects and one of the conference’s top cornerbacks will be a fun one to watch. Both players enter the season as fringe first-round 2021 NFL Draft prospects, so the winner of this battle could really elevate their draft stock.

The Florida Gators host the Georgia Bulldogs in a spectacular matchup on October 31st, 2020 at Ben Hill Griffen Stadium. It’s no secret that these teams do not like each other and I’d expect another bloodbath this upcoming season. The best player on Florida’s roster is the explosive tight end, Kyle Pitts. Likewise, on a talented Georgia defense, senior safety Richard LeCounte is the clear leader of the group.

Pitts is a bit light for the tight end position, weighing in the ballpark of 235 pounds, and he isn’t best in-line blocker, but he has elite athleticism and is a matchup nightmare. His movement skills are unparalleled at the position, as he consistently demonstrates his athletic prowess and fluidity. His hands are sensational, highlighted by the ease of which he plucks the football out of the air. In a modern-day, pass-heavy NFL, athletic tight ends like Pitts have a bright future.

Pitts will be challenged by Georgia’s Richard LeCounte. The veteran defender is an enforcer in the secondary for the Bulldogs. He is a smart football player, highlighted by his ability to diagnose the run versus the pass. He moves well in coverage, possessing a knack for finding the football. He also offers much in run support and can really lay the lumber.

The battle of Kyle Pitts and Richard LeCounte is another of fringe first-round 2021 NFL Draft prospects. Both players could move to the top of the draft board for their positions with a strong showing. Get your popcorn ready; this will be a fun one to watch.

On October 3rd, 2020, the best left tackle in college football, Penei Sewell, clashes with his toughest matchup of the season in Washington’s explosive pass-rusher Joe Tryon. To many, the 19-year old phenom is not only the best offensive lineman in 2021 Draft class but possibly the best overall player. He will face some talented pass-rushers in 2020, but none as explosive as Washington’s Joe Tryon.

Sewell might just be the best offensive tackle prospect to enter the NFL ranks since Joe Thomas in 2007. As NFL Network’s Daniel Jeremiah points out, “Sewell has ideal size, quickness, and power for the position. In the passing game, he’s quick out of his stance and does a nice job of staying square against his opponent. He’s a knee-bender and rarely lunges or loses his balance.”

Also, Sewell is a mauler in the running game, utilizing his quickness to climb to the second level with ease. Simply put, Sewell is an elite player, who just happens to play one of the most important positions in football.

Not many can challenge Sewell, but Washington pass-rusher Tryon has perhaps the best chance. Tryon busted onto the scene in 2019 by producing 8.0 sacks and 12.5 tackles for a loss. He has explosive athleticism paired with a quick first step, which allows him to keep offensive tackles on their heels. He has the ability to “get skinny” and naturally bends with ease. Tryon brings a non-stop motor and is highly competitive.

Tryon will have his hands full trying to beat Sewell, but if he has a good showing, his draft stock could skyrocket.