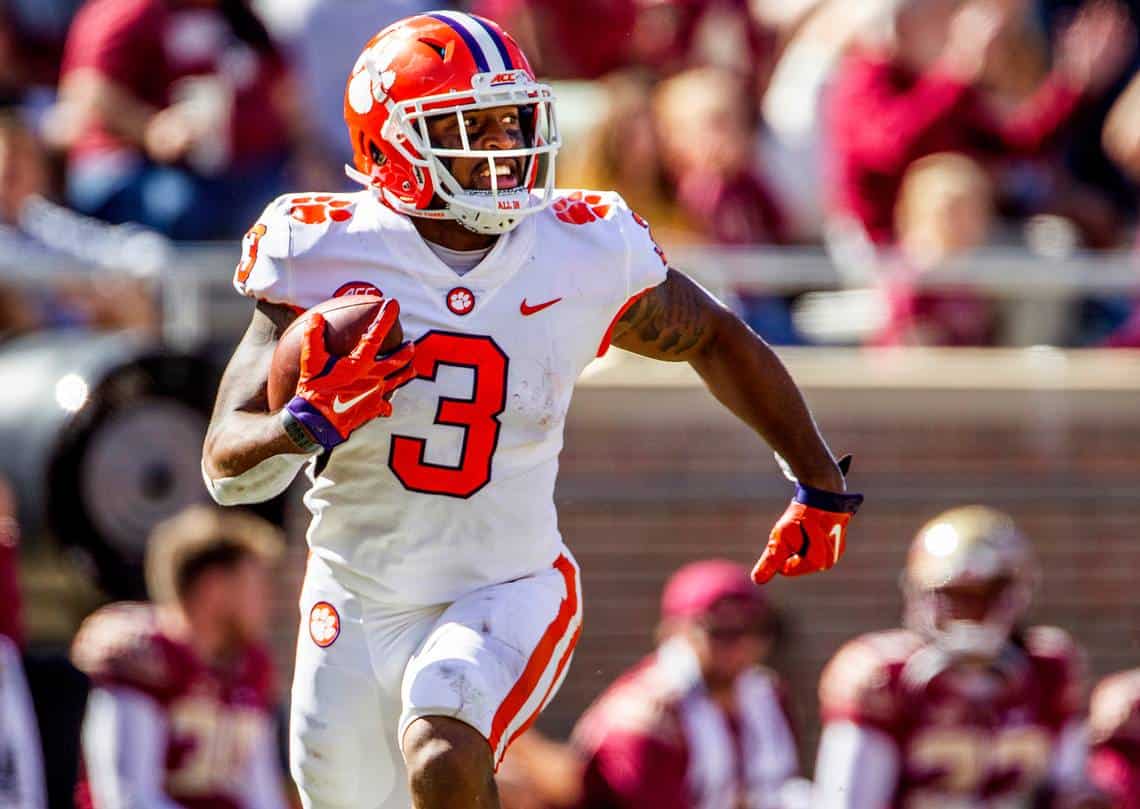 When Clemson head coach Dabo Swinney confirmed that star wide receiver Justyn Ross would miss the 2020 campaign with a “congenital fusion” earlier this week, a spotlight was cast on senior wide receiver Amari Rodgers and two talented — albeit relatively unknown — sophomores. While replicating Ross’ output is a monumental task that will likely require a group effort, the new-look receiving corps offers enough size, speed, and playmaking ability for an optimistic outlook. Here’s an in-depth look at the group of wide receivers that Clemson will field in 2020.

On Monday, we learned that Ross, unanimously regarded as one of the premier wide receivers in college football, is scheduled to undergo surgery to correct “congenital fusion” in his neck and will miss the 2020 season. In 29 career games (14 starts), Ross has recorded 112 receptions for 1,865 yards and 17 touchdowns. Last season, Ross compiled 46 catches for a team-leading 1,000 yards and nine touchdowns, and the ascending junior was expected to take a significant leap towards college football stardom in 2020. While Ross’ immediate future is uncertain, the Tigers roster an intriguing trio of pass-catchers that will be called on to collectively replace his production.

With Ross sidelined for the foreseeable future, Amari Rodgers becomes the Tigers’ primary receiving option. Rodgers, who suffered a torn ACL last spring, miraculously returned in time for Clemson’s second game, and was named an honorable mention All-ACC selection as a wide receiver and all-purpose player for the second time in as many seasons. All told, the 5-foot-10, 210-pound pass-catcher brought in 30 catches for 426 yards and four touchdowns and added 151 yards on 18 punt returns.

While Rodgers doesn’t project as a traditional No. 1 wide receiver, I suspect the Tigers will take advantage of his effectiveness in space and his ability to manufacture yards after the catch by moving him around formations and finding ways to get the ball in his hands. For perspective, I envision the team deploying Rodgers similar to how the San Francisco 49ers utilized Deebo Samuel last season. It’s highly probable that Rodgers doesn’t clear the 1,000-yard mark, but his versatility will be paramount in optimizing the Tigers’ aerial attack in 2020.

Perhaps the biggest wild card of this group, largely due to his stellar production in a limited sample size, Joseph Ngata also adds value in the return game on special teams. In 15 games, Ngata totaled 17 receptions for 240 yards and three touchdowns in 304 offensive snaps as a freshman. The Folsom High School alum also averaged 23.3 yards on 14 kickoff returns in 2019.

A projected starter in 2020, Ngata brings size (6’3″, 215), athleticism, and tremendous body control to the Tigers’ receiving corps. The ascending sophomore has the skill set to work all three levels of the field, and the frame to win in contested-catch situations. Amid the uncertainty suddenly surrounding the Tigers’ wide receiver corps, I like Ngata as an ACC breakout candidate.

The South Dade Senior High School standout, who amassed 50 receptions for 1,133 yards and 13 touchdowns as a senior, was touted as Clemson’s highest-rated prospect in their 2019 recruiting class per PrepStar, and the 35th-best player in the country, according to ESPN.

The 6-foot-3, 195-pound receiver played 254 snaps over nine games in his first season with the Tigers, reeling in nine receptions for 128 yards and three touchdowns. Ladson’s first collegiate reception went down as a 21-yard touchdown for backup quarterback Chase Brice against Georgia State, and his 57-yard catch against Virginia in the ACC Championship Game was a season-long.

Due to Ross’ injury, Ladson enters fall camp as a starter, and his impact on minimal touches as a freshman suggests the lengthy pass-catcher could become a household name in a matter of months.

The redshirt senior hasn’t had the career that many envisioned when he arrived on campus four years ago, but Cornell Powell suddenly finds himself in the mix for targets following the departures of Tee Higgins and Deondre Overton, and with the team’s projected top receiver on the mend for the foreseeable future.

Powell, who produced a career-high 15 receptions for 122 and two touchdowns a season ago — giving him 40 catches for 329 yards and three touchdowns in 42 career games — figures to be in a two-man battle with Ladson for a starting role in the fall. While Powell has performed admirably when his number has been called, the veteran best projects as a role player in 2020, albeit a crucial one.