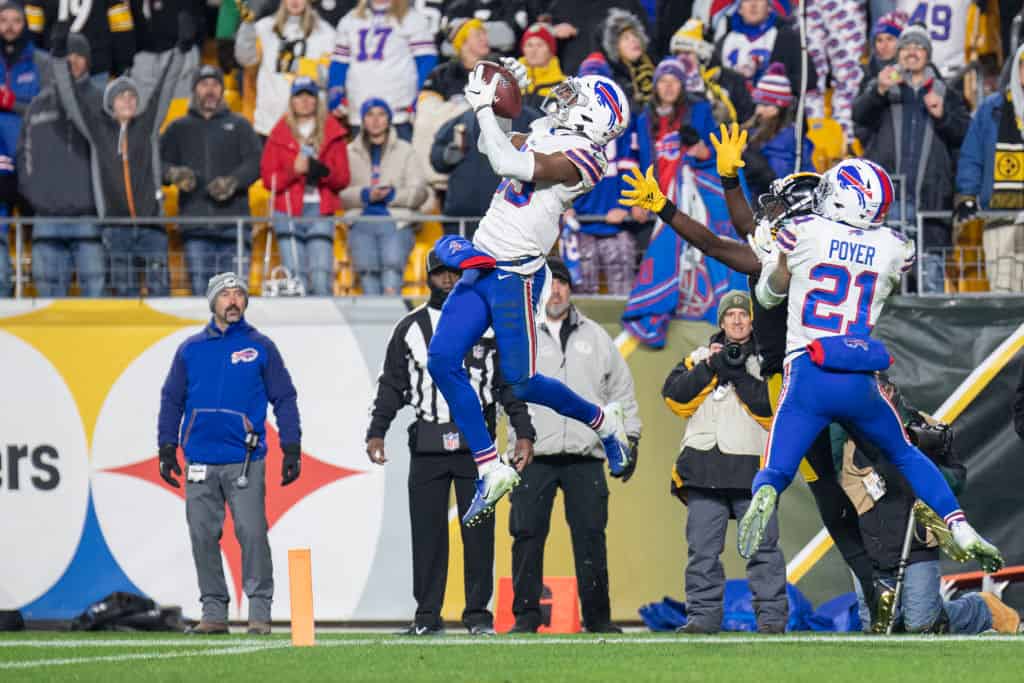 The Buffalo Bills find themselves heading into the NFL offseason with some key players slated for free agency. In a unique year with the league salary cap up in the air, the Bills will be forced to make some tough decisions. Let’s take a look at the Bills’ top free agents in 2021 and who should be priorities.

While the league has not officially announced the 2021-2022 salary cap for all teams, we have an idea as to what it’ll look like. OverTheCap projects that the NFL’s base salary cap for the upcoming season will be $176 million, which is $22.1 million less than the 2020-2021 season.

If that number were to be the salary cap for the league in this upcoming season, OTC has the Bills projected to have $2,160,069 in cap space as of this writing. That would give them the 13th-lowest cap space entering the offseason.

The Bills’ offense took a big step forward this season and is arguably the biggest reason they’ve had the success that’s led them to the AFC Divisional Round (thus far). Quarterback Josh Allen is playing at an MVP-type level. However, there are others to give nods to.

One of the key free agents the Bills heading into the season was left tackle Dion Dawkins, who signed a contract extension in August. With him signed, let’s take a look at a few other Bills’ free agents on offense.

Williams turned into one of the Bills’ best performers from free agency this season after inking a one-year deal. He signed with the Bills and his former defensive coordinator, Sean McDermott, on a “prove-it” deal. This was after an injury-riddled 2018 and a disappointing 2019 season. Williams rebounded in a big way this season, starting in all 16 regular season games and being on the field for 96% of the team’s offensive snaps.

Yet, with Dawkins’ extension and the fact that Williams has earned a sizable raise over the $2.25 million salary he earned this past season, he may be too expensive for the Bills to re-sign. Plus, with Williams now at age 28, this may be his best chance to cash in one last big contract.

If nothing else, Barkley represents a trusted backup quarterback for the Bills. He may not be the most important free agent for the Bills in 2021, but it may not be worth messing with synergy surrounding Josh Allen.

Barkley has 788 passing yards with three touchdowns and four interceptions in his three seasons with the Bills. Barkley is finishing up his two-year contract extension that he signed in 2018 for $4 million. Buffalo drafted Jake Fromm in 2019 — he could be an option at backup QB should Barkley leave.

Barkley will be hard-pressed to get an offer for more than what he signed with the Bills in 2018, and he very well could re-sign with the team this offseason. With Allen playing as well as he is, Barkley wouldn’t be more than an uninspiring insurance policy should the Bills’ star quarterback go down with an injury.

Feliciano has reminded many why he is such a valued member of the Bills’ offensive line since returning from injury. While he typically plays guard, he stepped up and played center when Mitch Morse got hurt. Even when the Bills’ entire offensive line was healthy, Feliciano was an impact player for them. When he started in all 16 regular season games for the Bills in 2019, he was on the field for 89% of their offensive snaps.

Feliciano is likely to be the second priority for the Bills amongst their offensive line free agents after Williams. With Cody Ford expected to be healthy heading into the offseason, Feliciano makes sense as another priority. Feliciano’s ability to play both center and guard effectively should see him earn an increase over the $4.4 million cap hit he had in 2020.

The Bills’ cap space situation entering free agency is tight. However, with Ford being the only guard signed through the 2021 season, there is a solid chance we could see Feliciano return.

The Bills still had a serviceable defense this season but was not the elite unit we saw in 2019. With that being said, the Bills still have a few members entering free agency from that group that the team will need to make decisions on. Let’s look further.

Arguably the Bills’ second priority amongst their free agents in 2021 after Daryl Williams, Milano had a down season compared to his strong 2019 season. That can be partially blamed on injuries, as Milano missed six regular games this season. There is some concern about Milano long-term after he’s missed 10 games due to injury over the last three seasons.

Regardless of that, Milano has proven to be a difference-maker and leader on the Bills defense when he’s healthy. He’s coming off an 11-tackle performance in the AFC Wild Card game against the Baltimore Ravens. Milano also had a career-high 3.5 sacks this season.

Milano should expect his market to be much better than the $2.1 million cap hit he had in 2020.

Of the two between Milano and Williams, it seems likelier that the Bills focus on re-signing Milano. That is because Dion Dawkins already signed to a big contract at the offensive tackle position. Plus, Milano’s down season due to the six games missed could work in the Bills’ favor. He could have a slightly cheaper price tag this offseason in free agency.

Wallace has been a terrific find for the Bills after being an undrafted rookie free agent signing in 2018. While the Bills have struggled to find a consistent cornerback outside of Tre’Davious White, Wallace has stepped up. He is a key part of this defense and should be a priority free agent for the Bills to re-sign in 2021.

One thing working in the Bills’ favor is Wallace is a restricted free agent, meaning the team will have the ability to assign a tender to him if they choose to. The Bills also would have the opportunity to match any offer he receives in free agency as well.

Because of that and his importance to the team, there is a strong likelihood that Wallace will be back in Buffalo next season. It certainly will be more than the $750,000 he made in 2020, though.

Murphy had the fifth-highest cap hit for the Bills in 2020 ($9.775 million) and has been a disappointment for the Bills. Buffalo took a chance on him in 2018 after he sat out in 2017 due to injury. He was signed to a three-year contract after having a career-high nine sacks in 2016, his last healthy season.

In his three seasons with the Bills, Murphy accumulated only 10.5 sacks combined over that time. Murphy may be one of the easier calls to make for the Bills this offseason. He was a healthy scratch in six games this season and in the AFC Wild Card game. Murphy is now 30 years old and finds himself buried on the depth chart.

It’s a strong bet that the team will move on from Murphy this offseason.