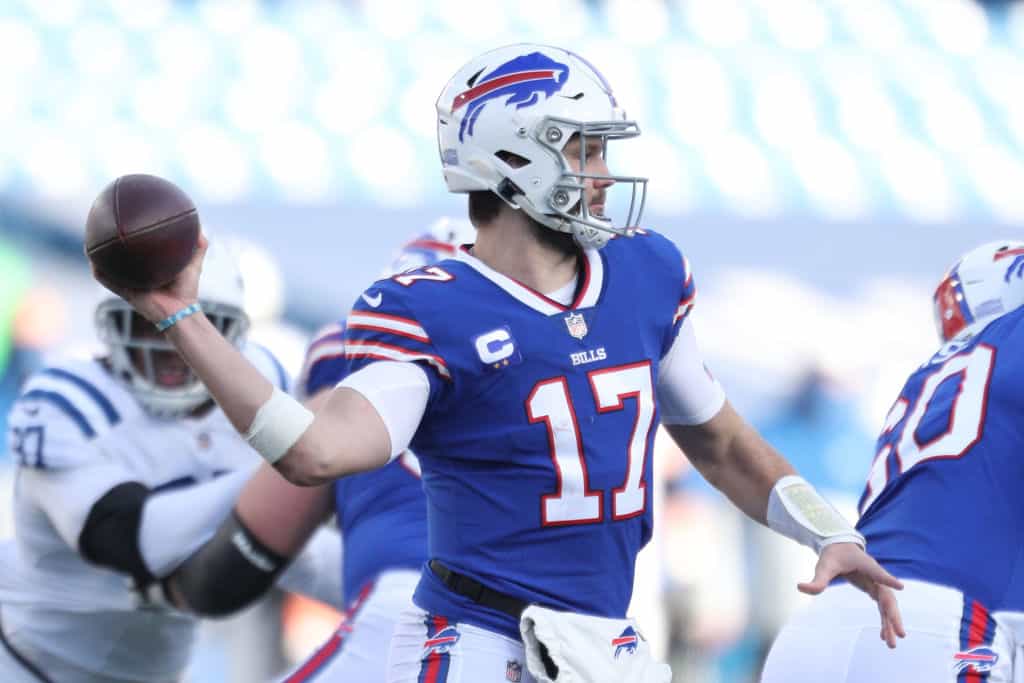 ORCHARD PARK, NEW YORK - JANUARY 09: Josh Allen #17 of the Buffalo Bills passes the football during the second half of the AFC Wild Card playoff game against the Indianapolis Colts at Bills Stadium on January 09, 2021 in Orchard Park, New York. (Photo by Bryan M. Bennett/Getty Images)
What's in this article? Click to show
The backdrop to the Ravens vs. Bills matchup
What we learned about the Bills this week
What we learned about the Ravens this week
Baltimore Ravens’ player to watch
Buffalo Bills’ player to watch
Ravens vs. Bills bottom line

Editor’s Note: For the rest of Mike Tanier’s individual NFL Divisional Round playoff previews, make sure to check out his full NFL Wild Card Recap. Not only does he give in-depth breakdowns of each game, but he also provides you with his Studs ‘n’ Duds.

The backdrop to the Ravens vs. Bills matchup

Lamar Jackson finally won a playoff game, folks! It’s about time, gosh-darn it. Heck, he turned 24 years old just last Thursday – it’s about time the slacker accomplished something. Josh Allen won his first career playoff game as well on Saturday. However, nobody spent last week acting like he needed a win to prove his worthiness as a quarterback/leader/citizen/human or anything.

Related | When do the 2021 NFL playoffs start? Updated schedule and start times

While NFL Recap readers typically are not among the JaCkSon cAn’T wiN bIg gAmEz demographic (none of your Twitter accounts have been suspended in the last five days), that lazy narrative was surely on many of our minds in Sunday’s narrow win over the Tennessee Titans. And now, Jackson and the Ravens must prove that they can win an even bigger game.

The Bills are one of the NFL’s best teams. There are also one of the most balanced. They may be the only team in the league that was hotter than the Ravens over the last month of the season.

Here’s NFL Recap’s first-look preview of the Divisional Round matchup with the Ravens vs. Bills.

How the Baltimore Ravens got here

Then Jackson raced through Titans defense for a 48-yard touchdown run. Next, he manufactured a second touchdown drive out of short passes and got a huge boost from a defense that held Derrick Henry to just 40 rushing yards to wrap up a 20-13 Ravens victory.

How the Buffalo Bills got here

The Bills took a 24-10 lead over the Indianapolis Colts on Saturday thanks to a Josh Allen playground drive-and-dish touchdown to Dawson Knox, a goal-line stand on defense, and some tightrope-walking sideline catches by Stefon Diggs and Gabriel Davis.

Then, it appeared that a gas leak beneath Bills Stadium caused everyone — Allen, Philip Rivers, coaches, the officials — to make decisions and play the fourth quarter as if they were still loopy after major dental surgery, resulting in terrible clock management, goofy fumbles, and hallucinogenic replay reviews. Once the air cleared, the Bills escaped with a 27-24 victory.

What we learned about the Bills this week

Allen and his receivers force opponents to cover the entire field, particularly the sidelines. Per Sports Info Solutions, the Bills led the NFL in completions (190) and yards (2,303) to the left and right sidelines in the regular season. Allen’s arm allows him to reach receivers 25 yards downfield and along the sideline on a wire.

Receivers like Diggs and Davis proved on Saturday that they can do some acrobatic stuff to get both feet in bounds.

What we learned about the Ravens this week

The Ravens’ run defense is better than advertised, thanks to elite run stoppers like Brandon Williams and Derek Wolfe and quality all-purpose defenders like Calais Campbell and Matt Judon. Per Football Outsiders, the Ravens also have the second-best defense in the league at stopping runs in short-yardage situations. Maybe that’s why Mike Vrabel kept punting on 4th-and-short near midfield.

Marquise Brown caught seven passes for 109 yards, including a 28-year old teardrop up the sideline, which appeared to settle Jackson down after his shaky start, and added two rushes for 19 yards. Brown is critical to the Ravens’ success not just for his value as a deep threat, but also because his speed sets up opportunities for the type of easy completions along the short sidelines that Jackson struggled earlier in the season.

Safety Micah Hyde broke up three passes against the Colts on Saturday. This included the game-ending Hail Mary in addition to seven combined tackles. Hyde has been an important multi-purpose safety and slot cornerback for the Bills for years. He’s likely to play an important role in containing Jackson and the Ravens option game.

Tom Brady versus Drew Brees may have the nostalgia factor, but Jackson versus Allen is where the action will be in the Divisional round. Jackson and Allen are a pair of thrilling young dual-threat playmakers who could spend the next decade squaring off against each other (sometimes for the right to face Patrick Mahomes).

The Bills and Ravens are surprisingly similar, right down to their excellent kicking games, and they are almost evenly matched. Allen’s deep passing ability and the athleticism of the Bills secondary appear to give them a minor edge.

At least we won’t have to hear about Jackson’s shortcomings as a quarterback/leader/whatever if the Ravens lose. Or, if some knuckleheads keeping bringing it up (because you know they will), at least we won’t be obligated to pay attention to it.