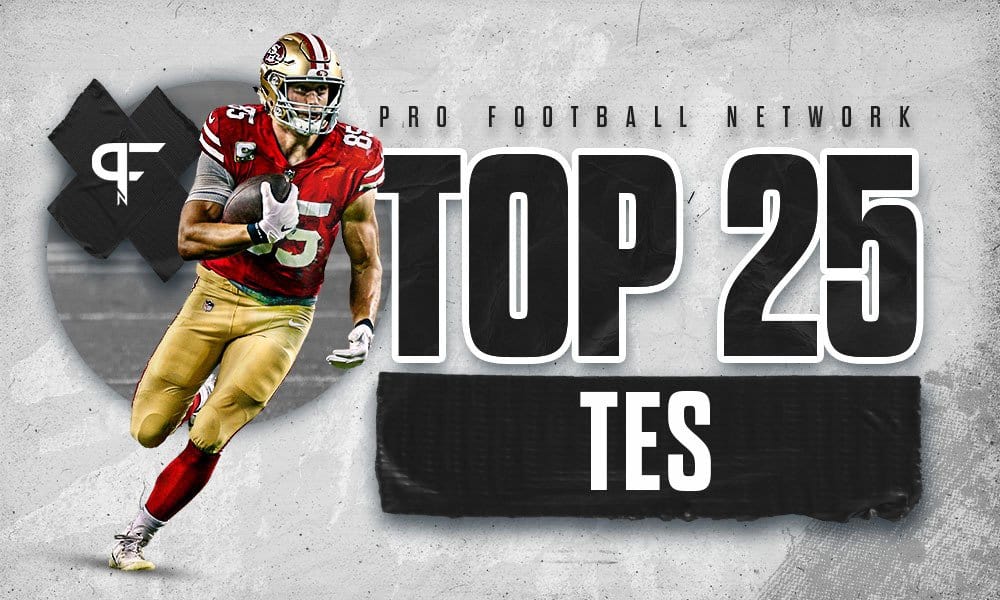 Let’s dive into the top tight ends for the 2021 NFL season, starting with a player on a brand new team.

Jared Cook was basically never used in protection last year and ultimately is a glorified big slot receiver, but his athletic ability is waning. Cook is a little over two years older than Rob Gronkowski, making him the oldest player on this list by a wide margin. He was starting to lose playing time to Adam Trautman late last year in New Orleans. Cook has had a good career, but it is probably coming to an end.

Seeing O.J. Howard on the list of the top tight ends in the NFL might raise some eyebrows, as most view his career as a disappointment thus far. However, before Howard was injured last year, he received the most playing time of Tampa Bay’s tight end group.

Tight ends take longer to hit their peak in the NFL than most positions. While Howard didn’t burst onto the scene early in his career, the best could be in store for this extremely talented player.

A year ago, Atlanta traded a second-round pick for Hayden Hurst. He caught 56 passes last year but wasn’t really a huge difference-maker. Hurst came into the league as an overaged prospect and probably is what he is at this point.

Of course, to no fault of his own, the Falcons drafting of Kyle Pitts (who would already be very high on this list if rookies were eligible) isn’t going to help Hurst’s cause at all. The Falcons did not pick up Hurst’s fifth-year option.

This is an up-and-coming player that could be far higher on this list a year from now. Trautman only played 450 snaps in his rookie year, but his play gave the Saints an easy decision to insert him into a full-time role in 2021.

Trautman did a nice job of run blocking in his rookie season, and while he wasn’t targeted often last year, he did make the most of those opportunities. Going back to his college film, Trautman is a guy that can certainly impact the passing game.

Eric Ebron has bounced around the league and isn’t a blocker at all, but he still creates mismatches in the passing game. Ebron has never lived up to his draft pedigree, and it sure didn’t help his cause that Detroit passed on Aaron Donald and Odell Beckham Jr. to draft him. Ebron played a high number of snaps for the Steelers last year. Will that continue with second-round pick Pat Freiermuth now in the equation?

This guy just keeps getting better and better. Mo Alie-Cox could be in for a much bigger role in 2021, especially since Indianapolis didn’t do much to improve their respective group of pass catchers. Alie-Cox has a basketball build with a long, wiry frame, and he does an excellent job in pass protection and blocking in the run game. Furthermore, Carson Wentz does have a strong history of targeting tight ends.

Jimmy Graham is still on Chicago’s roster, but will he really block Cole Kmet from playing time?

You wouldn’t think so, and Kmet showed why he was the first tight end drafted one year ago. He is the youngest NFL tight end in the top 25. Kmet still has significant work to do as a blocker, but he has the size and strength to improve in this capacity. He is already a good receiver and should improve dramatically with his routes and ability to set up defenders.

The Browns are paying Austin Hooper an awful lot of money but utilize three different players at the position. Hooper didn’t give the Browns all that much as a blocker in his first season in Cleveland. Obviously, this is an issue with how much the Browns run the ball. All of that being said, Hooper is a substantial contributor.

Robert Tonyan is an average athlete and isn’t great in contested-catch situations. Still, you can’t take his production from last year away from him. He hauled in 11 touchdowns, and his role kept increasing throughout the season as he gained Aaron Rodgers’ trust. We’ll see if Tonyan crashes back down to earth.

Irv Smith Jr. entered the NFL at a young age, and only Kmet is younger amongst the top tight ends listed here. Smith could have a bright future, as he has the chance to emerge as Minnesota’s third option in the passing game. He was quite productive when Kyle Rudolph was out of the lineup last year. Smith doesn’t offer a lot as a blocker, but 2021 should be his best season to date.

Next Page: Top TEs, who is No. 1?
RELATED ARTICLES
Fantasy Football