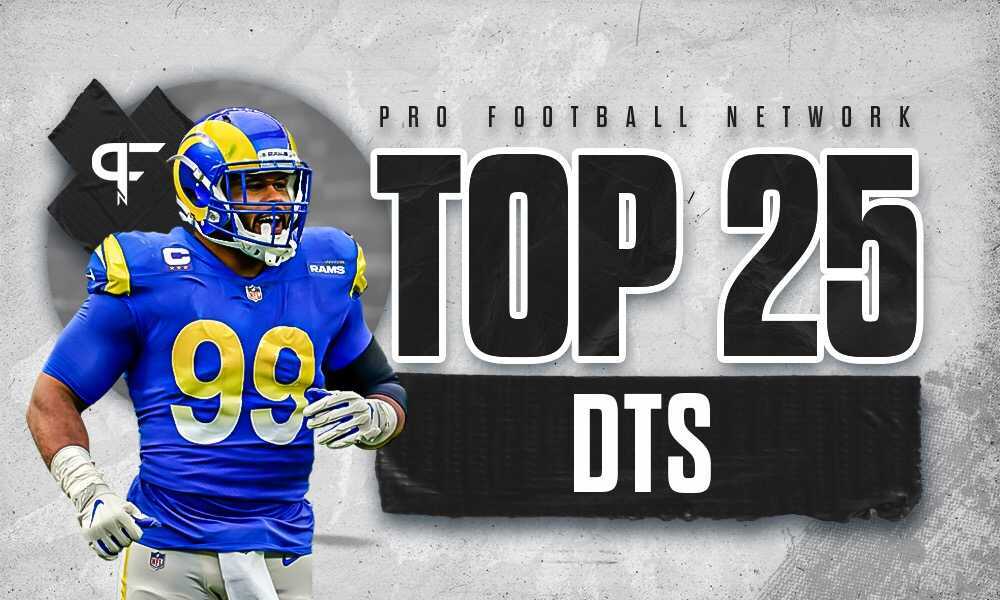 The top defensive tackles in the NFL in 2021 range in weight from 280-340 pounds. They range from athletic marvels that affect the passing game and shoot gaps to disrupt the run to behemoths that use vision, hands, and a stout anchor to keep linebackers free to flow to the ball. Some are even occasionally used as exterior defenders, playing as a 4i or 5-technique.

This subsection is full of versatility. There are the old, the young, and the established within the group.

David Onyemata has been one of my top defensive tackles in the league for a while now. His name gets hardly any recognition, but as I’ve watched that Saints defense throughout the years, he’s the one that has stood out on the defensive line to me. Onyemata is one of the most well-rounded and technical interior defenders in the league.

The former fourth-round pick combines good anatomical length with a great understanding of leverage. He supplements that with underrated athleticism for the position. Hopefully, 2021 is the year people begin to recognize him as one of the top defensive tackles in the league.

Kawann Short was one of the top defensive tackles in the league for a long time, but he hasn’t registered a sack in the past two seasons due to injury. Still, there’s nothing Short can’t do as an interior defender.

In his last fully healthy season, he was productive against the run and the pass. Short uses an outstanding blend of physical tools and hands to win against pass protectors. As a backside 3-technique, have fun trying to run outside zone away from him.

Linval Joseph is getting older, and it’s beginning to show as a pass rusher. However, he still provides great value as a run-defending nose tackle. Joseph still bullies blockers with the hammers he has for hands.

His ability to time the snap count and bubble back interior blockers is a treat to watch. It’ll be interesting to see if he can recapture some assertiveness as a pass rusher in 2021.

Jurrell Casey only played in three games last season. Yet, I expect him to dominate once again as one of the top defensive tackles heading into the 2021 season. Casey blends outstanding athleticism with great technique. He’s on the older end of the spectrum, so 2021 could be his last big hoorah, but I can’t imagine he goes out without a loud fight.

Matt Ioannidis is this low on the list because he didn’t play but three games in 2020. In truth, he is and has been one of the most underrated players in the league over the past few seasons.

Ioannidis is an outstanding pass rusher that complements the other pieces on Washington’s defensive line well. Ioannidis is still under age 30, so it’s safe to say he should continue this quiet dominance for a while longer.

Sheldon Richardson has been a solid interior NFL defender for a long time now. He doesn’t have a particular strength between pass rush and run defense — Richardson simply produces in both aspects of defensive line play.

Cleveland’s defensive tackle will turn 31 this season, so he may go in the opposite direction as others creep up the list. Nevertheless, he’s still producing well enough to deserve a spot at this table.

Dexter Lawrence is physically everything you want in a nose tackle. Men of his stature shouldn’t move the way he does. Although Lawrence doesn’t provide the pure dominant power of Vita Vea, he’s improved technically in his two seasons. Furthermore, Lawrence will turn just 24 years old in his third year, playing at a position that takes time to iron out. I expect him to continue to improve on an already good defense.

Daron Payne is one of the best pure run defenders in football. Washington simply said, “let’s draft Alabama defensive tackles,” and man, it’s worked. Payne provides immense value to Washington as their rock in the center of their odd-man front.

His role into 2021 as a top defensive tackle will be to keep rookie linebacker Jamin Davis free to attack downhill. I like Davis’ chances of having a productive rookie season behind Payne and the rest of this defensive line.

Akiem Hicks is one of the best run defenders in the NFL today. The only real reason he’s landing at No. 17 is that these rankings are a bit of a projection into 2021, and the 350-pound Hicks is now 32 years old.

He’s an old man in NFL terms — that body has been battling for a long time now. At any rate, he was outstanding last season once again for the Bears and still moves with more giddy-up than you’d expect from a house.

Jarran Reed’s competitiveness shines on the football field. His production is often off the back of his own hustle rather than outrageous athleticism. Reed’s book of pass-rush moves is long, and he’s shown the ability to set blockers up through deception.

His hand placement and strength allow him to locate and dominate the wrist of blockers (and subsequently countering off that). The Chiefs acquired one of the top defensive tackles in football to pair with their stud interior defender.