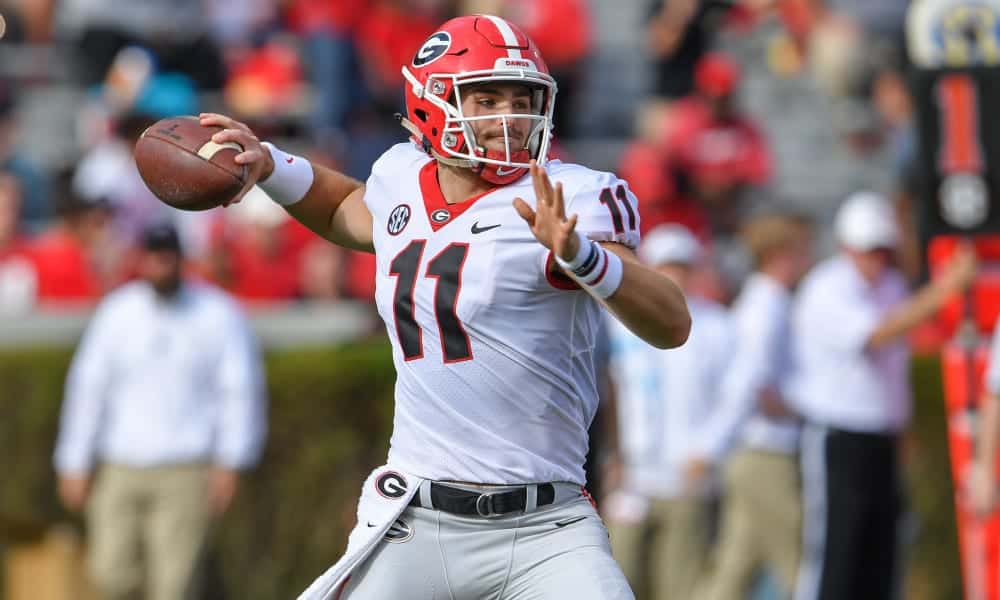 Every week, I open up the mailbag for anyone to send me their questions on the current college football season, the NFL, or the 2020 NFL Draft. This week, the Week 16 mailbag is packed with NFL Draft news and notes on the running back class, Malcolm Perry, Brandon Aiyuk, and much more. But we kick things off with some thoughts on highly discussed quarterback prospects – Georgia’s Jake Fromm and Washington’s Jacob Eason.

Do you have a question you want to send to me? Send it to asktony@pfn365.com, and we’ll be sure to include it in an upcoming mailbag column.

Can either Jake Fromm or Jacob Eason be a worthwhile starter in year one depending on the system they get drafted into? Or are they more developmental type of prospects?

I’m not a Jake Fromm guy and have stated so several times during our CFB game day blog all season. He was also a Week 13 Slider. Even before the season began, I mentioned I thought he was being overrated. I think he’s an adequate game manager but needs everything around him to work. For more on Fromm, check out this column from colleague Ian Cummings that was published yesterday.

Eason, at this point, scares me and has huge downside – too much inconsistency and too small of a body of work. It may be enticing for him to enter the draft if get gets a second-round grade from the advisory committee, but returning for another year on the college field and getting more experience is probably best for his long-term outlook in the NFL.

Tony, how do you stack the top of the RB class this year? And because it’s so deep, would it be smart for teams to wait on drafting their back?

If we assume the top underclassmen are entering the draft, then we’ll have good running backs available through the middle of round four. You can also get good situational backs during the second half of day three. That said, only the top five guys on my board have a chance to be feature backs – the rest are change of pace/third-down type of backs.

As far as waiting to draft a running back later on – I am of the belief if you are on the clock and there is a player available at a position of need rated much higher than anyone else on your board, you select the player; you don’t wait.

Where do you view Navy QB Malcolm Perry ultimately playing in the NFL. Could he simply be the next Taysom Hill?

I think Perry will be drafted as a running back and return specialist that can throw the option pass on occasion and eventually develop pass-catching skills. I love his quickness and his ability to create when the ball is in his hands. I love his instincts and football IQ, but Taysom Hill was head and shoulders a better passer coming out of college.

Brandon Aiyuk is skipping the Sun Bowl. While he is not on the Jerry Jeudy level, can Aiyuk and players of similar skill sets really increase their stocks given how deep the WR class is?

Aiyuk’s draft stock will depend on his forty yard dash time. He’s a terrific route runner with reliable hands as well as next-level focus and concentration. His ability to run, especially with his size and build, is the big question. The faster he runs, the earlier he will be drafted.

What are corners such as Antoine Winfield Jr. and Jaylon Johnson lacking in their games that they can improve upon to enter in the top-45 discussion?

I think both Winfield Jr and Johnson are potential top 45 picks at this point.

Johnson has the size, speed, and physicality to start at the next level – he just needs to polish his technique, especially the ability to make plays against the pass when his back is to the ball.

Winfield is a complete player – his main issue is medical and the fact he has missed more than half of the season in both 2018 and 2017 due to injuries.

Is there a significant drop off from Jeffrey Okudah and Trevon Diggs to the second group of cornerbacks?

I think there is a big drop off from Okudah to that second tier of corners, which includes Diggs. I had high hopes for Diggs prior to the season, which I wrote about, but he was too inconsistent for him to be in the top twelve selections, which I initially believed to be possible.