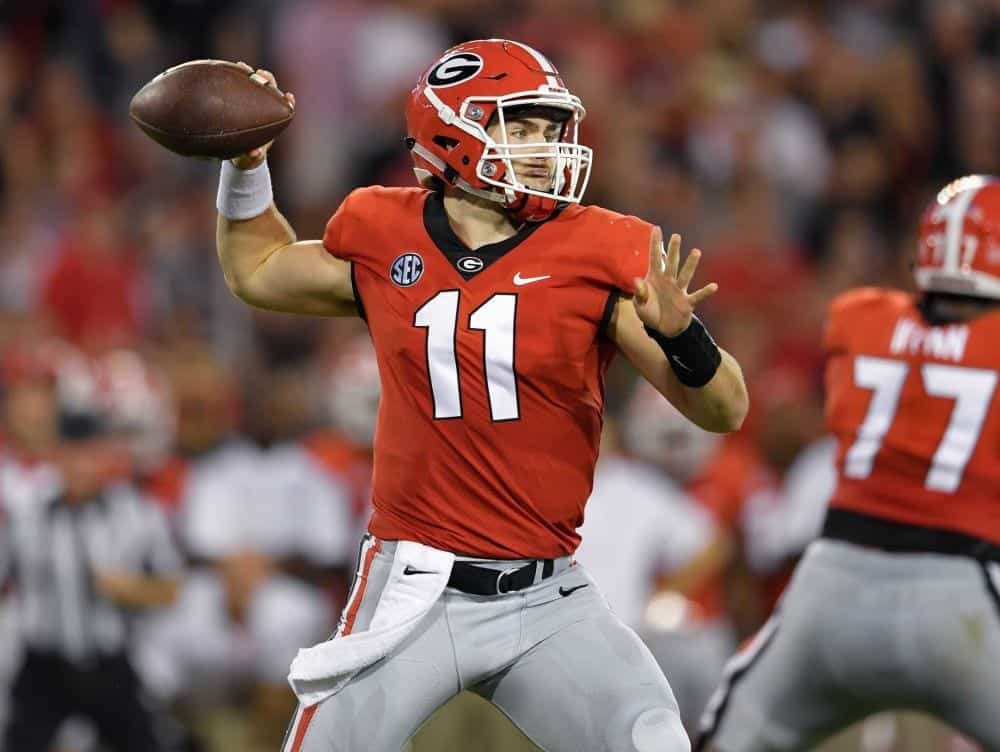 What's in this article? Click to show
Looking back at Jake Fromm’s career at Georgia
Will Jake Fromm enter the 2020 NFL Draft?
The cognitive part of the game is Fromm’s biggest asset

The lexicon of quarterback evaluation is always evolving – it’s the consummate inexact science. The duties of the quarterback position can be successfully executed in countless ways, and thus, when an NFL team searches for quarterbacks with winning potential, a pressing question naturally arises: Just what exactly are they searching for? Georgia Bulldogs quarterback Jake Fromm hopes to give his own unique answer in the Sugar Bowl against the Baylor Bears.

Fromm, a junior, is still deliberating his future in football. He’s eligible to declare for the 2020 NFL Draft for the first time in his career, but his stock is declining for the first time in his career. Furthermore, evaluations surrounding the pro-style quarterback are as polarizing as they’ve ever been. A strong finish from Fromm at the Allstate Sugar Bowl on January 1, 2020 can help boost Fromm’s draft stock and make a tough decision that much easier.

Looking back at Jake Fromm’s career at Georgia

To understand the contention surrounding Fromm’s reputation as a quarterback, one must know how he progressed to this point. Fromm stepped into the starting role when Jacob Eason went down with an injury early in 2017. The then true freshman exploded onto the college football scene, throwing 181 completions, 2,614 yards, 24 touchdowns, and seven interceptions on 291 attempts. Fromm’s efforts led the Bulldogs to the College Football Playoff and the National Championship game, where he nearly bested the mighty Alabama Crimson Tide before falling short to late-game heroics by Tua Tagovailoa.

Normally, a season like Fromm’s 2017 campaign would give a quarterback immunity in an ensuing offseason. But with five-star prospect Eason still lingering on the depth chart, there were questions surrounding Fromm’s future. Those questions were ultimately quelled when Kirby Smart chose to stick with Fromm as his starter, prompting Eason to transfer to Washington.

Fromm posted similarly impressive raw numbers in 2018, but the Georgia Bulldogs regressed, landing an 11-3 record and a loss to Texas in the Sugar Bowl. After the season, there was again speculation about Fromm being benched, this time for five-star redshirt freshman Justin Fields. But again, Smart vouched for his incumbent quarterback and Fields followed Eason’s example, transferring to Ohio State.

The 2019 season was almost a microcosm of Fromm’s profile as a draft prospect. His brightest moments culminated in an incredibly efficient 22-3 regular season touchdown-to-interception ratio, as well as tough, reliable performances in victories against ranked opponents such as Notre Dame, Auburn, and Florida.

However, Fromm closed out the last five games of the season with a completion percentage under 50 percent. In the SEC Championship game against LSU, his limitations were on full display. LSU dominated Georgia 37-10, ending their playoff hopes. Our own Tony Pauline revealed in his championship live blog that he’d designated Fromm as a Day 3 prospect, and Matt Valdovinos also expressed concerns about Fromm’s ceiling at the NFL level.

Fromm regressed as the season went on, and with the Sugar Bowl nearing, he has a decision to make. He can either stay at Georgia for his senior season in an attempt to revitalize his draft stock, or he can declare his intentions to enter the 2020 NFL Draft and take his chances on the resume he’s amassed. Will he take the risk of returning and potentially suffer injury or further regression? Or, will he enter the NFL Draft and risk minimizing his own opportunities by staking his career on a shaky foundation?

For Fromm, this decision is a challenging one. He has traits as a draft prospect that are both appealing and disconcerting. At 6-foot-2, 220, Fromm is an average-sized quarterback with average mobility and athletic traits. His arm strength is similarly uninspiring, but for what he lacks in physical qualities, Fromm compensates with intelligence and fast processing, superb competitive toughness, leadership, and an inspiring efficiency within structure.

It’s not necessary for quarterbacks to enter the NFL Draft as ascending prospects, as previous drafts have proven, but it’s especially important for Fromm who doesn’t have the unteachable physical traits of a quarterback like Jordan Love or Justin Herbert. Because Fromm lacks the arm talent and athleticism to allow space for further growth or elevate those around him, and because he’s regressed, scouts may view him as a prospect who has already maxed out his potential. Whereas other prospects may benefit from projected future development, Fromm is limited in that department.

One way Fromm can end this perception is by using his best traits to put together a standout performance at the Sugar Bowl.

The cognitive part of the game is Fromm’s biggest asset

The quarterback position is one of the most mentally demanding positions in football and the mental game is Fromm’s strength. He has one more chance to remind NFL teams of that against the No. 7-ranked Baylor Bears. The Bears, likely stigmatized as a Big 12 team, actually have a fairly solid defensive unit. The Baylor defense is No. 41 in the NCAA in yards allowed per game, third-best in their conference, and they’re one of just 24 defenses nationwide to allow under 5.0 yards per play. They offer a tough, but beatable test for Fromm, and given Matt Rhule’s offensive prowess, Fromm may be drawn into a shootout either way.

Quarterbacks of Fromm’s profile have succeeded before. The Tom Brady comparison was the hot cliche juxtaposition when Fromm first broke out, but stylistically there is something to be said about both quarterbacks lacking athletically, while excelling mentally. Kirk Cousins is a far more accurate and grounded comparison for Fromm. Cousins has been one of the most efficient quarterbacks in the NFL in 2019 with a strong structure in Minnesota, and he has the Vikings sitting at 10-4 with a playoff berth within grasp. There’s reason to believe Fromm could achieve that kind of success in the right situation.

The labels of game manager and the precise, prototypical pocket passer is looked down upon with negative connotations in a modern football era where excitement and explosiveness is on the rise.

Georgia Bulldogs quarterback Jake Fromm is up against this pre-draft perception, but at the Sugar Bowl, he has a fleeting chance to remind NFL teams that his kind of quarterback – the enigmatic, the efficient, and the intelligent – can win all the same.

Will he rise to the occasion? That remains to be seen.