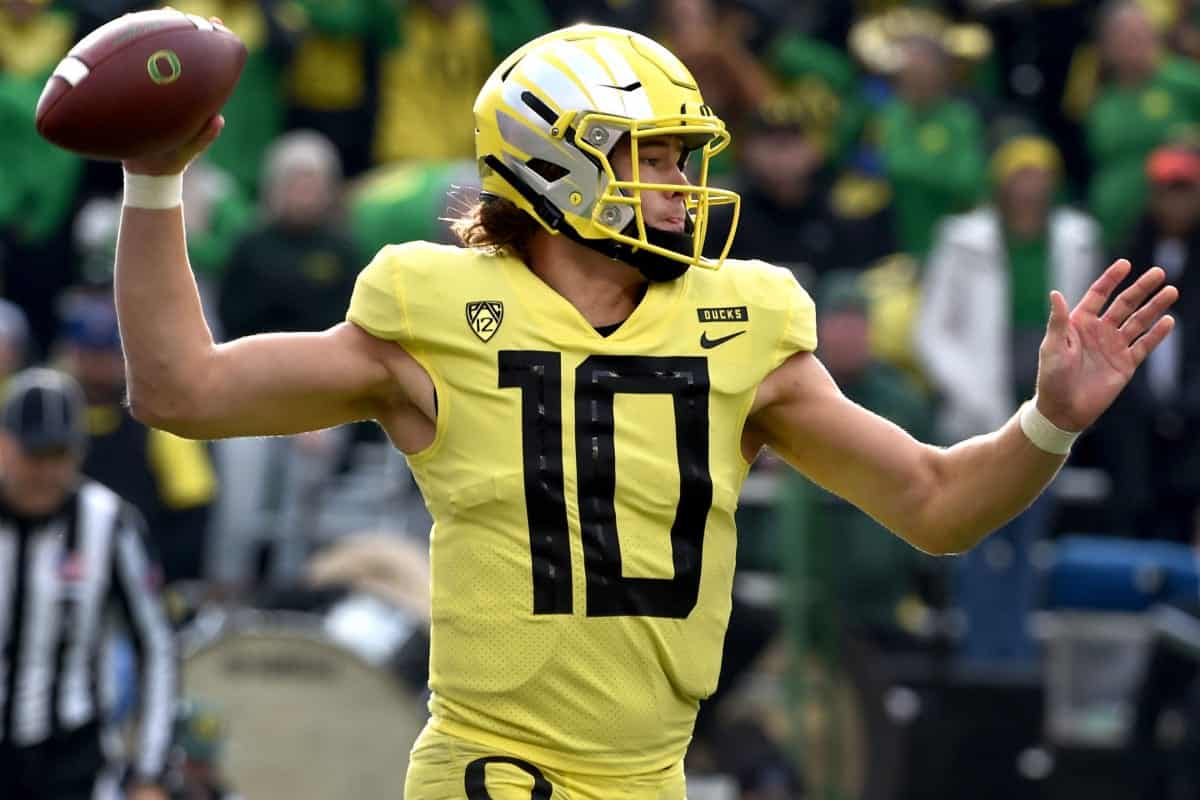 It was an interesting slate of games during Week 13 of the college football season as LSU dominated, Ohio State held on in a Big 10 showdown with Penn State, and the Oregon Ducks fell to Arizona State.  Saturday also saw a major upset in the state of Florida and was a weekend where three linebackers stood out while a senior tight end continued his march up the 2020 NFL Draft boards.  Here are the Risers & Sliders for Week 13.

Brycen Hopkins/TE/Purdue:  After a slow start to the season, Hopkins has been on fire since the beginning of October and is flying up draft boards.  His most recent gem was an 8 catch, 127-yard, 2 TD performance during a loss to Wisconsin. Hopkins’ totals this season include 45 catches, 561 yards and 3 TD’s.

Despite being a backup for most of his Purdue career, Hopkins received third-round grades from scouts entering the season.  He’s already accepted an invitation to the Senior Bowl and if he turns heads in Mobile, Hopkins may just jump into the second day of the draft.

Malik Harrison/LB/Ohio State:  There were a number of Ohio State Buckeyes who stood out during the victory over the Penn State Nittany Lions but Harrison gets my vote.  A defensive prospect often overshadowed on the Ohio State defense, Harrison finished the game with 9 tackles and 2 tackles for loss.

His stats this season are not eye-popping but the way Harrison has developed into a three-down defender – making plays in space and up the field while playing tough, disciplined football – has impressed NFL decision makers.  Harrison offers scheme versatility and grades as a solid second day selection.

Sage Lewis/LB/Florida International:  Lewis was one of two FIU prospects I highlighted on Friday and the senior came up huge during the Panthers upset victory over the Miami.  He led the defense with 10 tackles and intercepted a pass to start off the second half, his third pick of the season.

Lewis is an undersized run and chase linebacker. He displays terrific speed moving in every direction of the field and goes hard on each down.  Poised to be a day three pick, Lewis could develop into a starter on Sunday if properly used.

Kristian Welch/LB/Iowa:  Entering the season graded as a PFA, Welch is in the middle of a career campaign and exceeding expectations.  He led the Hawkeyes with 12 tackles during their victory over surging Illinois, giving him a team-leading 70 tackles.

Welch has limitations in his game, yet he’s a terrific run defender who plays with a special teams mentality.  He may end up on the outside looking in after next year’s draft, but I expect him to compete for a roster spot over the summer as a backup middle/inside linebacker and special teams player.

Alohi Gilman/S/Notre Dame:  I graded Gilman as a fourth-round prospect entering the season and the junior has lived up to expectations.  He presently ranks third on the Notre Dame defense with 56 tackles and added seven more during the victory over Boston College in South Bend.

Gilman and his Irish teammates held Eagles ball carrier AJ Dillon to just 56 yards.  More of a box safety and best playing downhill, Gilman is a terrific run defender who plays with a special teams mentality.

Darrynton Evans/RB/Appalachian State:  Evans is the second Mountaineer to make the risers list this season with linebacker and Senior Bowl invitee Akeem Davis-Gaither being the other.

Last year, Evans stepped in for the injured Jalin Moore and finished with 1,187 rushing yards.  This year, Evans has totaled 1,014 rushing yards and 11 TDs and he still has one more regular season game on the schedule as well as the Sun Belt title contest.

Evans has a compact build, an explosive style, and great football intellect.  He needs to improve his receiving production but the junior is highly regarded in the scouting community.

Sleeper Prospect – Zach Quinney/T/Georgia Tech:  It’s been a terrible season for Georgia Tech, who hung on for dear life to beat North Carolina State last week to win just their third game of the season.  Yet despite the disappointment, left tackle Zach Quinney has quietly impressed scouts with an ever-improving body of work.

The athletic lineman moves well around the field, showing the ability to quickly get to the second level and block in motion.  He needs to work on his game and must improve his playing strength. That said, Quinney has upside and must be kept on the scouting radar.

Small School Prospect – Adam Rodriguez/Edge/Weber State:  Weber State is again on their way to the FCS playoffs after earning a #3 seed and receiving a first-round bye.  They have three next-level prospects, all on the defensive side of the ball, with Rodriguez grading the best of the trio.  The senior is a tough, instinctive pass rusher that’s used out of a three-point stance as well as standing over tackle.

Despite dealing with injuries this season, he finished with 8 TFL’s, 5.5 sacks and recorded 4 PBU’s.  Rodriguez shows the speed and balance to rush the edge as well as the athleticism to play in space.  He’ll be a terrific backup at outside linebacker in a 3-4 alignment.

Justin Herbert/QB/Oregon:  My criticisms of Herbert have been consistent the past two years – he’s physically gifted and for the most part, plays mistake-free football. However, he’s a signal-caller who cannot carry the offense and often fails in the big spot.  This was all on display during the loss to Arizona State on Saturday night when Herbert started the game making poor passes. This eventually led to his two interceptions on the evening.

In the end, Oregon lost and watched their national title hopes go down the drain.  Herbert has all the tools to be a big-time passer but there’s no wow factor to his game and no real sense that he’s going to come through in the clutch.  Rather, Herbert is a signal-caller that needs all the other pieces working around him. And while that’s not necessarily a bad thing, it’s not the definition of a franchise quarterback.

Jake Fromm/QB/Georgia:  I’ve had my concerns about Fromm the past two years and although I believe he can be a solid prospect, I’ve never graded him as a top 45 selection.  The past few weeks, Fromm has struggled and looks like a last day pick.

Against Texas A&M on Saturday, he completed just 11 of 23 passes for 163 yards.  This followed completing 46.4% of his passes against Auburn (though he did toss 3 TD’s) and 44.8% against Missouri the prior week.  Fromm can be all over the place with throws, as the numbers show, and is better served as a backup in the NFL.