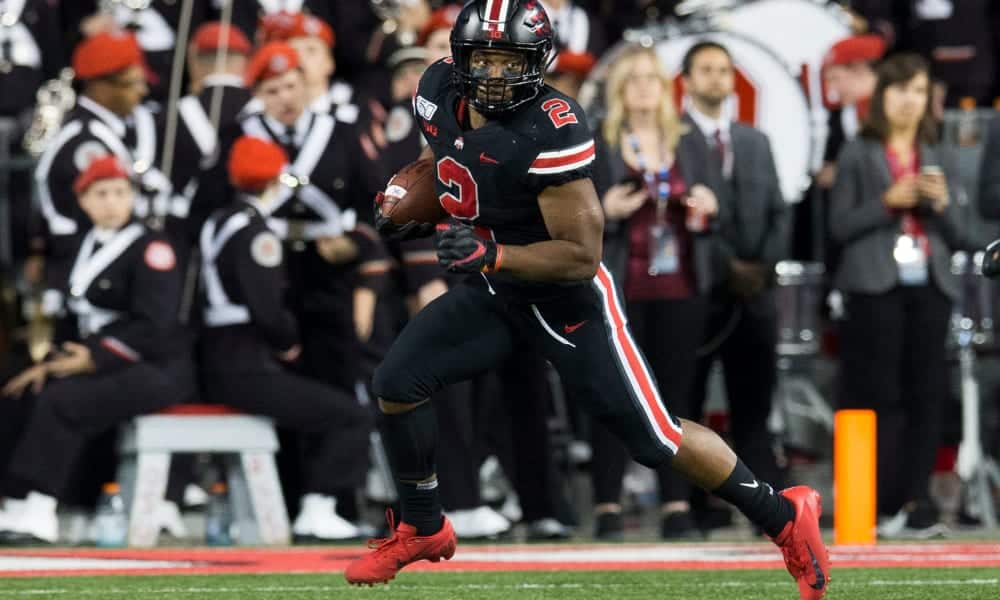 There is less than a month until the 2020 NFL Draft. The Los Angeles Chargers have an obvious and glaring need on the offense at quarterback, as Philip Rivers signed with the Indianapolis Colts in free agency. There is speculation that this will be addressed in the first round. Yet, there is still another hole, while running back Austin Ekeler did prove to be productive he needs a right-hand man. Given the talent in this year’s draft, the Chargers should draft a running back between the second and fourth rounds.

Underlying this need is Melvin Gordon’s departure to the Denver Broncos. The breakup was not surprising as Gordon was holding out for a new contract and ended up missing the first four weeks of the season as a result. Ekeler is a good back and excels catching the ball out of the backfield, but he isn’t the workhorse north to south rusher.

Ekeler earned an overall Offensive Share Metric grade of 8.22 during the 2019 season and qualified for a grade in just four games this season as a rusher. Ekeler ranked as the 47th overall rusher last season, below Gordon, and much lower than the league average for a lead back. Gordon earned an overall grade of 10.8 in 2019 and qualified for a grade in eight of the twelve games he played this season. 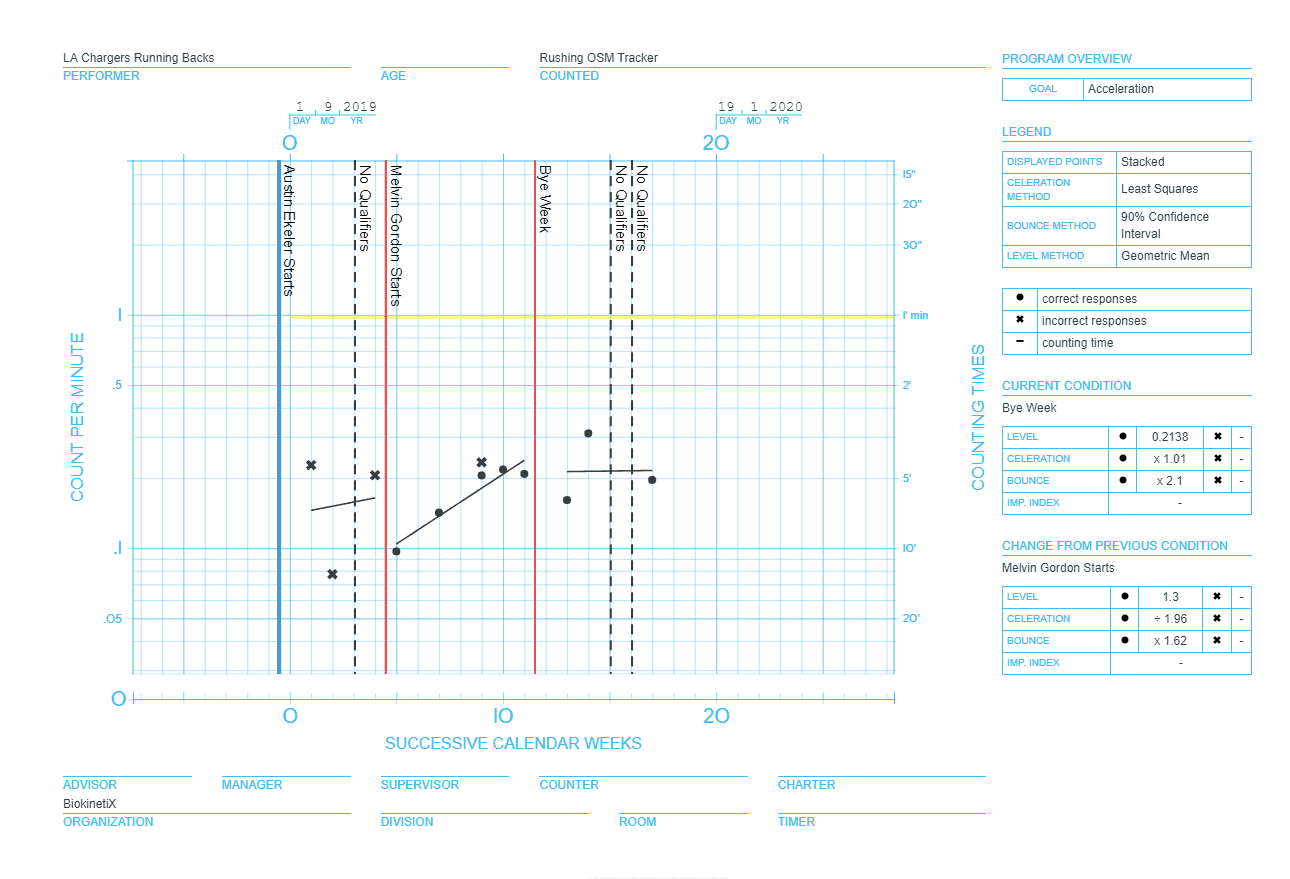 The unit needs massive upgrading. Ekeler is not a good enough rusher to carry the Chargers on his own. The first three weeks were sporadic at best with a low point coming week two, not qualifying at all week three, and modest improvement in week four. Gordon returned and got better each week, and even helped Ekeler in week nine. From October 6th to November 17th, Gordon’s OSM performance nearly doubled per minute week over week, however it was still below the league average for RB OSM performance. After the bye week, both backs disappeared. RB should be a high priority for LA moving forward in the draft.

Now, first things first, LA has to take a QB in the first round. Tyrod Taylor deserves this chance with a solid offense built around him. The Chargers can take advantage of letting their rookie sit for at the very least opening week and allow them more time to adjust to the differences that come with transitioning from college to professional football.

As for the pick, with the resources used to invest in the offensive line, any of the top four QBs could flourish with the protection provided. Protect assets and pick whichever QB is left after the Cincinnati Bengals and Miami Dolphins take their pick. It’s almost a foregone conclusion that the Bengals will select LSU QB Joe Burrow with the number one pick. Still, there seems to be some uncertainty as to who the Dolphins will choose between Alabama QB Tua Tagovailoa and Oregon QB Justin Herbert.

In the many mock drafts, I have run through Pro Football Network’s Mock Draft Simulator, about 60% of the time Herbert is available for LA to draft at sixth overall, Tagovailoa sits at about 30% when Miami passes for Herbert. The other 10% is when the Chargers are presented with their choice of Herbert or Tagovailoa (those get weird).

The other QB of the top four is Jordan Love from Utah State, but that would most likely involve a trade down. So with that taken care of, let’s look at some day two targets for the Chargers.

A need at running back has not been discussed for the Chargers in draft discussions. Ekeler can’t get the job done alone, and the only other back on the roster is Justin Jackson. After LA’s first pick at 6, their second-round pick is 37th overall. It would not be surprising to see the RB class as a whole slide in this draft due to other needs and the depth of the wide receiver class.

When the second pick in my mock drafts came up, Georgia’s RB D’Andre Swift came up much more than expected; however, his game translates more towards Ekeler’s. The best-case scenario for the Chargers would see Wisconsin’s Jonathan Taylor drop to 37, but that only happened in my drafts about 10% of the time.

Taylor became the first player in FBS history to run for 6,000 yards in three years. He is a fantastic downhill runner with an explosive combo of speed and power. He has great patience, allowing blocks to develop and finds the lane provided. Not great at creating extra yardage and making guys miss, more of a run you over and carry guys along for the ride.

What I think most love is when Johnathan Taylor hits the hole you see that burst of speed (4.39) and power. At the very least he’s a late R1 or early R2 pick. #HereWeGo #SteelersDraft pic.twitter.com/jvVz7NGrvc

The other option I end up selecting most of the time is J.K. Dobbins from Ohio State. As stated earlier, the WR class is incredibly deep, but by 37th overall, the top tier receivers will almost surely be selected. WR is another position that will most likely be addressed for the Chargers in the 2020 Draft, but RB should take priority as LA does have a solid combo between Keenan Allen and Mike Williams.

Dobbins was a three-year starter for the Buckeyes and was tied for the Big Ten lead for rushing yards in 2019 with 2,003. He is skilled in all areas of the position, waits for blocks to develop and effectively finds holes all over the field. He runs strong with outstanding field vision and instincts, sells pass routes exceptionally well and is a tremendous blocker who gives effort and finds results.

The Chargers would find another solid back in Dobbins to regain the production lost with Gordon’s departure and a player who can complement well with Ekeler. It seems slim that the Chargers select Taylor without moving up but this would be another scenario where waiting will not hurt. 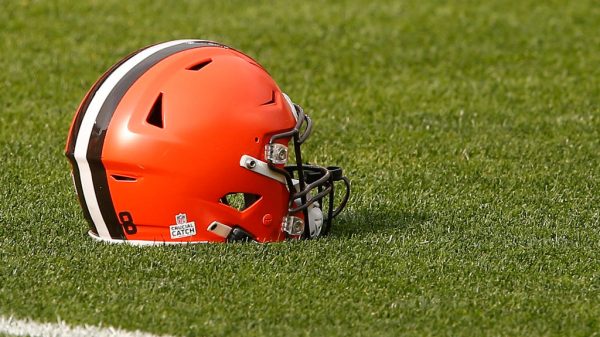 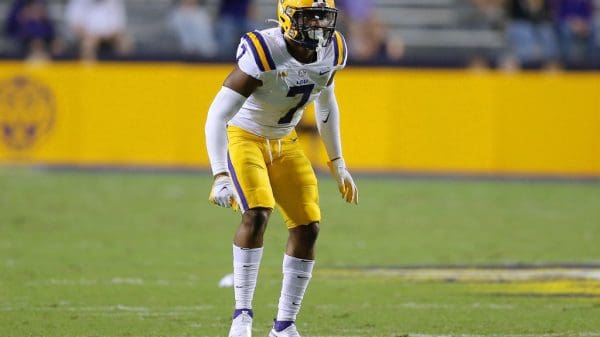