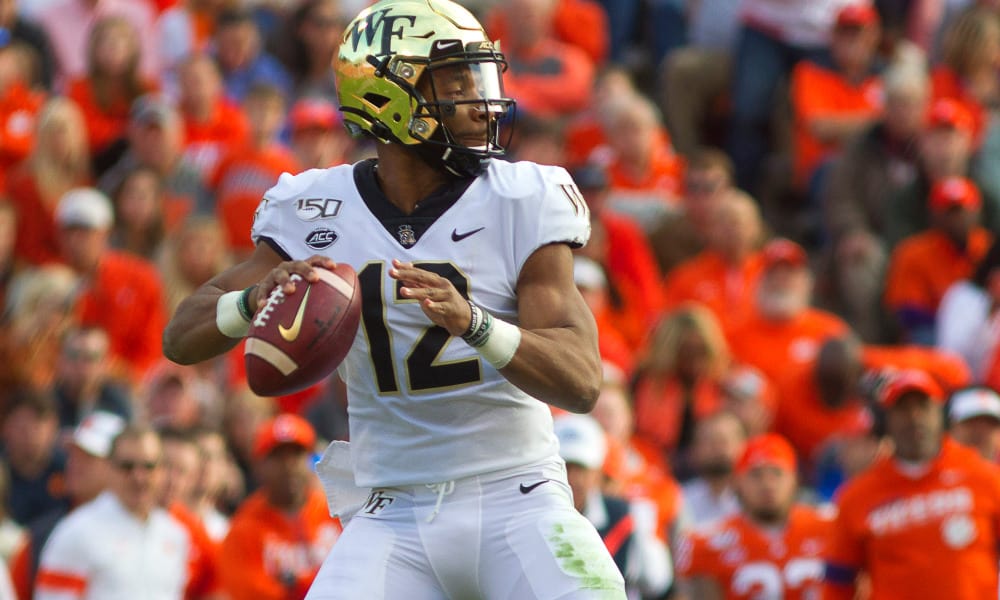 The measures taken in 2020 may give way to more significant long-term implications, and sweeping systematic changes could occur in the face of adversity. But it’s taxing to think about the structural overhaul of NCAA football that might be caused by the current global climate. What is less projective is what kind of impact a canceled season might have on 2021 NFL Draft position groups and the players who fill them.

Some position groups will be more resistant to change than others. Even if most conferences cancel their seasons, Trevor Lawrence and Justin Fields should be two of the first three signal-callers off the board. That’s where most draft evaluators are currently at, and a canceled season only locks that in stone.

Prevailing opinions will also likely remain the same for bonafide blue-chip prospects, such as Micah Parsons, Penei Sewell, Rondale Moore, and Marvin Wilson. Parsons and Moore have already opted out, aware of the security they have, and others have already started following suit.

Despite all this movement, the luxury of security is only possessed by so many players. The majority of college football participants have a tough question to answer: Do they consider opting out to preserve their safety, or do they push on, and make a gamble that could end with them earning more recognition on the NFL Draft circuit?

If most conferences do cancel their fall football seasons, then this question becomes moot. But the situation isn’t any less complex. Looking ahead to the draft, in a scenario in which the 2020 season is canceled, or at least very severely truncated, let’s take a look at which three position groups might be impacted most, with time-relevant NFL evaluations potentially in jeopardy.

As mentioned earlier, Lawrence and Fields should be two of the top performers in this category, but behind them, there’s a great deal of congestion, and numerous contenders for the QB3 mantle were eyeing 2020 as an opportunity to prove their mettle.

If the 2020 season was to be canceled or abbreviated, then these quarterbacks might not be able to end their careers with a decisive punctuation mark for evaluators — Players like Jamie Newman, Trey Lance, Brock Purdy, and Kellen Mond, among others.

What happens if Newman can’t use his graduate transfer season with the Georgia Bulldogs as a springboard into the NFL? What happens if Mond and Kyle Trask can’t take advantage of the turnover in the SEC and distinguish themselves? What happens if Lance can’t showcase his talents against FBS competition, and give the NFL a barometer for his skill?

Players like Lance and Purdy at least have a bit of breathing room here, with Lance being a redshirt sophomore and Purdy being a true junior. A year delay isn’t a terminal issue for players with remaining eligibility, but every year counts for players trying to maximize prospective NFL careers.

With uncertainty surrounding how long externalities surrounding the virus will last, the security of the NFL has to be a coveted asset — one that prospects will undoubtedly want to seize, but might not have the chance to do so.

Quarterback is one of the more volatile positions for production, partly because the circumstances around the quarterback are so crucial to their success. For some quarterbacks, all the pieces might have been coming together in 2020. But if the chance to prove it on the big stage falls out from under them, it could drastically affect the trajectory of individual careers and change the complexion of the 2021 quarterback class.

What about the depth of the wide receiver position?

It’s insane how deep the 2020 wide receiver class is, especially coming after a 2019 class that was also lauded for its depth. The 2020 season was supposed to act as a sorting bowl for the droves of playmakers in college football, but without a season, this position group could be further confounded in the 2021 NFL Draft.

There’s a clear-cut group at the top of the 2021 wide receiver class, consisting of players like Ja’Marr Chase, Rondale Moore, Rashod Bateman — who opted out as well — and Devonta Smith. But these receivers alone fall far short of encapsulating the entirety of the 2021 class’ talent. From Chris Olave to Josh Imatorbhebhe, and from Tamorrion Terry to T.J. Vasher, dozens of pass-catchers might receive draft-able grades in 2021.

With a 2020 season, this group gains vital separation that allows evaluators to polish their lists with greater detail. But without it, this group remains the congested conglomerate that it is. Testing somehow becomes even more important in the spring, assuming virus countermeasures do not still impede that, and the depth is further eroded by players who choose to stay in college for the 2021 season, to make up for their lost opportunity.

The NFL Draft is always a complicated process, and teams have to have a process that mitigates the adverse effects of uncertainty. But for the wide receiver position group in the 2021 NFL Draft, a shortened or canceled 2020 season would only magnify the obscurity that already exists, and would make adding offensive firepower far more difficult.

In a way, the edge rusher group in the 2021 NFL Draft is similar to the wide receiver group. But it’s also vastly different. While both positions have the potential to boast great depth next April, there is no clear-cut upper-echelon in the edge department, and opinions on who’s worthy of an early pick range from Gregory Rousseau to Jayson Oweh to Joseph Ossai.

It’s not brash to say that at least five different edge rushers could be “EDGE1” in the aftermath of a 2020 season. Still, without that 2020 season to provide clarity, the proverbial “top dog” may never materialize. In 2017, it was Myles Garrett. Earlier this offseason, it was Chase Young. Who would it be in 2020 without any recent game tape?

Edge rushers have an incredibly important role in football, and the requirements of the position are incredibly nuanced, both in run defense and pass defense. Players can’t win consistently on athleticism alone, but certain athletic traits provide players with the edge they need to succeed.

2020 might have been a chance for a player like Jayson Oweh to supplement his extraordinary athleticism and add more technical precision to his game. It might have been a chance for Carlos Basham to maximize his burst off the line, or for Rousseau to improve his flexibility and hand speed. Without a full 2020 season, NFL evaluators would be faced with incomplete profiles, and subjectivity would be required to fill in the gaps.

Will evaluators be more comfortable banking on a player with proven production and technical prowess, or will they favor athletic testing and raw physical ability in their prospects? A 2021 NFL Draft without 2020 tape would provide an intriguing insight into these kinds of preferences, but also risk misleading NFL front offices who are forced to act on information that might not be up to date.

This article is not meant to be an argument for the season to occur. That depends on whether or not it’s safe for players, coaches, and their families to proceed, and whether they’re comfortable proceeding. It’s not my place to make that kind of blanket judgment for so many people. But just in case the worst comes to pass, we can speculate on what a canceled season might mean for certain players, and better prepare if those contingencies were to come to fruition.