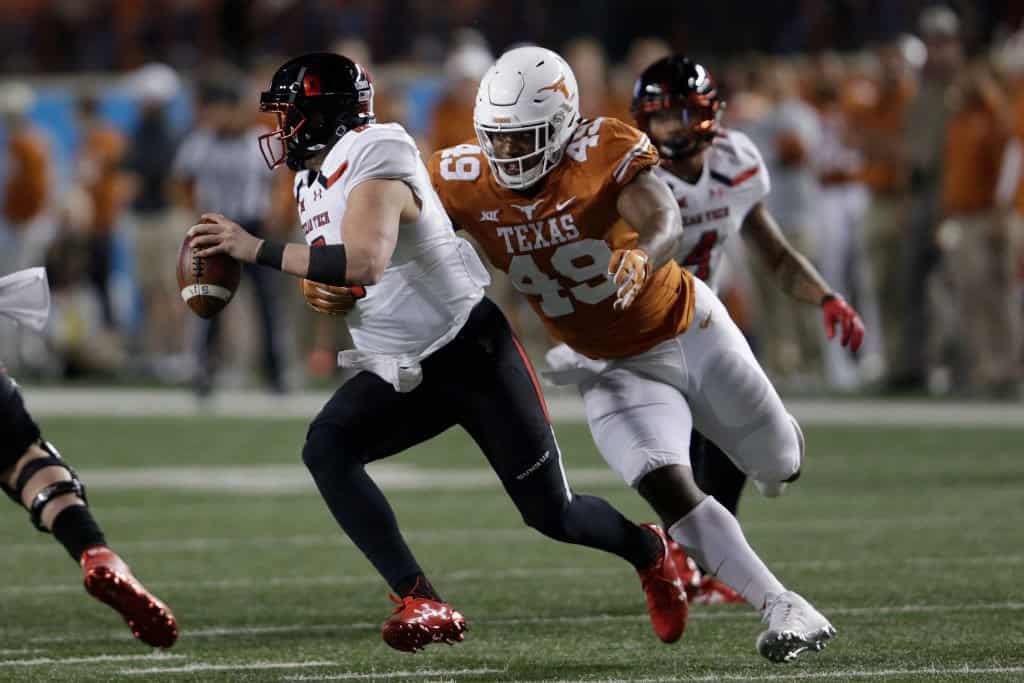 Former high school defensive end turned defensive tackle Ta’Quon Graham is one of a small group of Texas Longhorns headed to the 2021 NFL Draft. Although he may not have the same NFL Draft stock as his compatriot on the defensive line Joseph Ossai, will Graham hear his name called in Cleveland later this spring?

Positives: Athletic interior defensive tackle with next-level physical skills. Fires off the snap with an explosive first step, plays with proper lean, and effectively uses his hands. Strong, gets leverage on opponents, and makes plays up the field or down the line of scrimmage. Forceful, flies around the action and gives effort.

Negatives: Gets tied up in blocks or driven off the line by a single opponent. Must develop more moves disengaging from opponents.

Analysis: Graham was out of position in the Longhorns three-man line, but has a large upside due to his athleticism. He’s a Day 3 pick who could be used as a rotational lineman early in his NFL career while he develops his game.

Before shining on Saturdays as a defensive tackle for Texas, Ta’Quon Graham began his path to the NFL Draft as a heavily decorated high school football standout elsewhere on the defensive line. The Temple, Texas, native played defensive end for the Temple High School Wildcats, making an impression early on. As a result of his play in his sophomore season, Graham was voted the District 17-5A Newcomer of the Year.

However, his best work was yet to come.

Graham had a laundry list of honors at Temple. He was a three-time All-District honoree, All-State in his junior campaign following a 23 tackle for loss, 11.5 sack season. Finally, in his senior season, he was an All-American. His performances in 2016 — despite battling injury — earned him a spot in the 2016 Offense-Defense All-American Bowl.

More prestigiously — certainly in the state of Texas — he was voted to the Dave Campbell Texas Football 2016 Super Team. Nowhere in the nation is high school football so revered and competitive as Texas, and Graham excelled.

A four-star recruit, he was the 34th ranked player in the state. Additionally, he was the 15th ranked defensive end in the country by 247 Sports. Graham garnered attention locally — with TCU the first to offer — and nationally with offers from Georgia, Cal, and Nebraska. However, one offer held his attention over all others.

In September 2016, he committed to Texas. “Texas has always been that childhood school. I grew up watching Texas. Everything around here is all Texas,” he told 247 Sports.

Over the next four years, Ta’Quon Graham would transition from high school defensive end to a defensive tackle for Texas. He had a reported weight of 255 pounds coming out of Temple. However, he tipped the scales at 290 pounds at the 2021 Reese’s Senior Bowl.

Graham made his presence felt early in the Big 12. As a freshman, he may have only logged six tackles, but he secured his first tackle for loss and sack within his first year with the program. Although he would have to wait until 2019 to register another solo sack, Graham put his length, strength, and hand size to log his one and only forced fumble against Georgia in their 2018 season finale.

Through 2019-2020, Graham started every game at defensive tackle for Texas. He became one of the team’s most productive defensive players, registering 17.5 tackles for loss and four and a half sacks over two years.

Graham had 3.5 of those tackles for loss in a standout game against Oklahoma State in 2020. He added a fumble recovery and a career-high five tackles as Texas shocked the sixth-ranked Cowboys.

Following the 2020 season, Ta’Quon Graham announced he would opt out of Texas’ bowl game and declare for the 2021 NFL Draft.

The first thing that Ta’Quon Graham offers a team in the NFL Draft is experience. Graham has played 48 games with 24 starts as a Texas defensive tackle. During that time, he has also lined up at defensive end, and obviously, had a prolific high school career on the edge. Experience and versatility are not the only factors that warrant consideration for teams thinking of drafting him.

Graham has a good motor, and it runs hot in just about every play. There is little evidence in the games that I’ve seen that he ever plays at anything less than 100 percent. Combined with some functional play strength, it makes him a difficult proposition to stop. Furthermore, he has exhibited impressive burst at the line of scrimmage.

One of his most impressive physical traits is his length. Combined with big hands — and some evidence that he knows how to use them — Graham can wrench by opposing offensive linemen to do damage in the backfield.

What are the potential concerns about Graham?

Although he has evidenced some impressive play strength, Graham can all-too-often be moved about at the line of scrimmage. He needs to be more powerful if he is to be able to consistently win at the line of scrimmage. Although he has experience of playing off the edge, he hasn’t shown the necessary speed, athleticism, or bend to win anywhere other than inside at the NFL level. Despite good initial burst, he hasn’t demonstrated the speed to burst past opposition defenders.

Therefore, his role for an NFL team may only be as a 3-tech defensive tackle.

As mentioned above, Texas defensive tackle Ta’Quon Graham’s best fit in the 2021 NFL Draft will be for a team looking for a defensive tackle prospect to play predominantly as a 3-tech on a four-man defensive front.

Likewise, some teams that fit that requirement are the Las Vegas Raiders, Cleveland Browns, Dallas Cowboys, Minnesota Vikings, and Atlanta Falcons. Where are they likely to select Graham in the 2021 NFL Draft?

In his latest big board for Pro Football Network, Tony Pauline gives Ta’Quon Graham a sixth-round grade as his 291st ranked player.