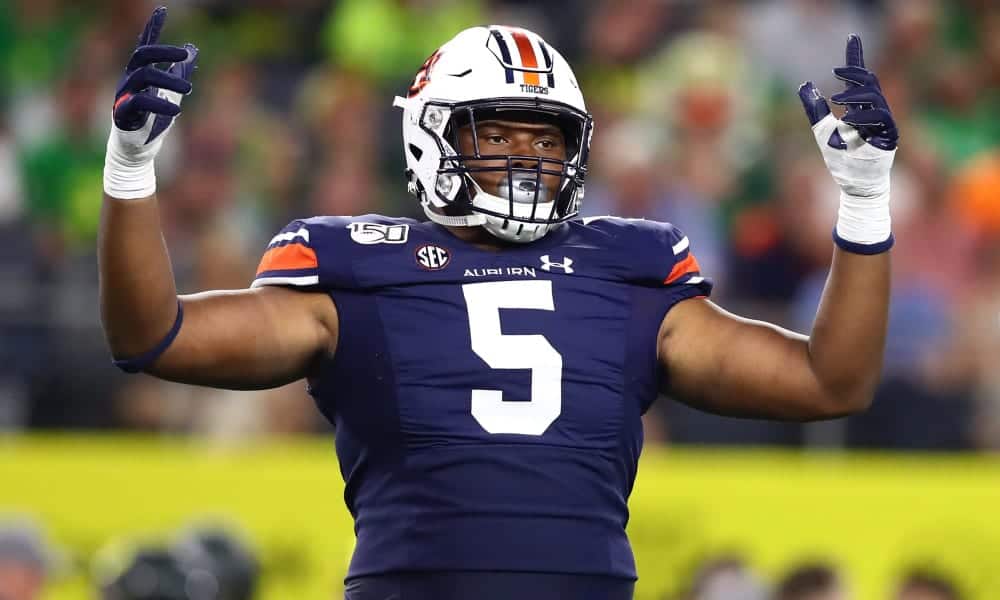 Career Snapshot: Two-year starter who earned First Team All-America honors as an all-purpose player as a junior in 2019. Caught 30 passes for 348 yards and one touchdown in five games at wide receiver in 2019 before he moved to quarterback for the final eight games.

Finished with 185 carries for 1,468 yards and 13 rushing touchdowns and added three touchdown passes on 74 pass attempts. Earned Second Team All-SEC honors as an all-purpose player, made 67 catches for 745 yards and five TDs and scored two touchdowns on five punt returns as a sophomore in 2018.

Positives: Explosive athlete who shows great versatility at the college level. As a ball carrier, he plays with a rough-and-tumble style and displays great elusiveness and the ability to create yardage. Makes defenders miss and displays terrific footwork, balance and body control. Plays with a fearless style, takes chances and always works to pick up positive yardage. Extends his hands, works to catch the ball away from his frame as a receiver and flashes the ability to make some incredible receptions.

Negatives: Doesn’t have a true position. Must improve his route running. Slow to locate the ball in the air and must improve his hand-eye coordination. Tends to get too fancy at times, runseast and westand doesn’t turn it up the field. Will peek before he’s caught the pass on occasion, which leads to drops.

Analysis: Bowden Jr. is a tremendous athlete and a versatile skill player, buthis game needs a lot of work. He’s by no means a sure thing, but if properly coached he could be an explosive player at the next level as a receiver, as a return specialist and on reverses.

Positives: Quick first-step defensive tackle who could be used at the three-technique position. Fires off the snap, plays with terrific pad level and easily moves about the field. Shows good change-of-direction skills, fluidly moves down the line of scrimmage and makes plays outside the box in pursuit of the action. Consistently gets leverage on opponents.

Negatives: Lacks bulk and gets controlled by blockers at the point of attack. Possesses a bad combination of poor size and speed. Marginally productive in college.

Analysis: Carter is a hard-working prospect, but he comes with limited upside. His best and possibly only shot is as a backup three-technique tackle.

Positives: Intense linebacker who shows great instincts and a feel for the game. Breaks down well, displays solid range and makes a lot of plays with his hustle. Explodes up the field against the run, sells out to make plays and remains disciplined with assignments. Displays a good head for the ball and effectively reads and diagnoses the action. Crashes around the field and plays with suddenness.

Negatives: Occasionally plays out of control and takes himself from the action. Gets too amped up at times. Despite solid playing speed, comes with poor computer numbers.

Analysis: Daniel is a high-revving linebacker who gets the most from his ability. He has limited physical skills, but he could make a roster as an eighth linebacker and special-teams player.

Positives: Powerful, small-area blocker who overwhelms opponents. Blocks with proper lean, stays square and easily turns defenders off the line to open up running lanes. Keeps his feet moving, engulfs opponents at the point of attack and anchors in pass protection. Works well with linemates, keeps his head on a swivel and plays with a nasty attitude. Sets with a wide base, explodes off the snap into blocks and controls opponents once he gets his hands on them.

Negatives: Really doesn’t bend his knees or sink his butt at the line of scrimmage and isn’t a leverage blocker. Gets tall as the play proceeds. Shows almost no ability on the move.

Analysis: Stenberg is a throwback lineman who absolutely annihilates opponents once he gets his hands on them. He must learn to block with better leverage, but in a system that does not require him to cover much area, Stenberg can start at the next level.

Career Snapshot: Two-year starter who made 36 tackles (9.5 for loss) with 8.5 sacks, three forced fumbles and four pass breakups as a senior in 2019. Started nine games as a junior and made 26 tackles (six for loss) with one sack.

Positives: Tall, big-bodied defensive lineman who flashes athleticism. Shows power, plays with proper pad level and can be tough to stop. Moves relatively well and shows the ability to slide down the line of scrimmage in pursuit of the action. Fires off the snap and works hard.

Analysis: Taylor is an athletic talent with outstanding size, but he needs to work on every area of his game. Unlikely to be drafted, I would expect Taylor to end up on a practice squad this fall.

Career Snapshot: First-year starter who caught 15 passes for 254 yards and two touchdowns as a senior in 2019. Missed one game in 2019 due to a leg injury. Drew three pass-interference penalties on four targets in 2018.

Positives: Athletic college receiver who’s very rough around the edges. Possesses outstanding size, gets vertical and boxes out defenders with his large frame. Fights to come away with the difficult reception and displays solid hands. Offers the quarterback a huge target. Effective downfield blocker.

Analysis: Wagner is a tremendous athlete who could eventually develop into a solid tight end at the next level if he improves his game. He comes with great upside, but Wagner is a long ways from being NFL-ready.