PRO FOOTBALL NETWORKThe NFL is fast. PFN is faster.
More
Facebook
Twitter
ReddIt
Linkedin
Email
What's in this article? Click to show
Early reports are the Giants will need to move on after Saquon Barkley suffered a torn ACL
Who steps up to fill the role that Saquon Barkley’s injury opened up?
Is there a veteran free agent running back available that could take the workload?

Three letters you never want to hear in regards to an injury, ACL. It appears that is precisely the injury Saquon Barkley faces after being tackled on the sideline during their game against the Chicago Bears on Sunday.

This is the worst-case scenario, and Barkley joins the unbelievable list of Nick Bosa, Soloman Thomas, and Parris Campbell, of players who could have seen their seasons end on Sunday due to a similar injury.

The injury came on a 2nd & 10 rush on what appeared to be a routine play. Immediately, Barkley removed his helmet and was writhing in pain on the sidelines. He was unable to put any weight on his leg and was quickly carted off to the locker room with an apparent right knee injury. Initial reports were that Barkley was receiving X-Rays on his knee. However, before the game was over, the news shifted.

According to CBS sources, the team believes Barkley’s injury is a torn ACL based on the manual tests and initial diagnosis. If this is the case, the former first-round draft pick out of Penn State just saw his season end in one hit. Along with the hope of fantasy managers who spent a top-two overall selection on the New York Giants running back.

If this is the case, Barkley’s injury puts attention on the Giants running backs room as they attempt to find a way to replace his workload.

Who steps up to fill the role that Saquon Barkley’s injury opened up?

Purely based on the depth chart, the next name up would be Dion Lewis. During their game on Sunday, Lewis carried the ball ten times for 20 yards and a touchdown. He has typically been used as a passing-down back in his previous stints on rosters, and that continued in Week 2 by catching four of his five targets for 36 yards.

Lewis was the only running back who saw any work once Barkley was injured and forced out of the game. Lewis was acquired in the offseason after spending his previous season as a change of pace back for the Tennessee Titans. However, I am sure Joe Judge never planned on making him a featured back for their offense.

The other remaining option on the Giants’ active 53-man roster is Wayne Gallman. The 25-year-old has only a single reception on the season so far and has never been someone the team was overly confident in giving a full workload, even when Barkley was injured in 2019. His highest-touch game came in Week 4 last year against Washington when he rushed the ball 18 times for 63 yards and a touchdown.

Given the current roster options, I find it highly likely the team will try out several running backs in the coming days and bring in some veteran pieces.

Is there a veteran free agent running back available that could take the workload?

Absolutely. The first name that comes to mind is Devonta Freeman. Freeman was working out for several teams as recently as last week. Having already been linked to several potential spots, Freeman makes all the sense in the world and should be viewed as the frontrunner to land the starting role.

Another veteran option is RB Lamar Miller. Miller was the starting running back for the Houston Texans in 2018 but missed the 2019 season after tearing his ACL. Interestingly enough, Miller was just signed and then released by the New England Patriots, raising questions about his effectiveness post-recovery. Any team facing a situation like the Giants currently find themselves in need to do their due diligence and explore every option.

Other free veteran free agents are players such as Bilal Powell, Spencer Ware, and Peyton Barber. There is a chance the team could look to some players who just missed rosters following the 2020 NFL Draft.

Whichever direction the organization chooses to go, this will have to be a committee approach and rely on depth rather than talent. QB Daniel Jones will have to use his full complement of pass-catchers to have any hope of competing in 2020. 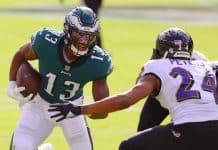 Who are some early Week 7 waiver wire targets in fantasy football? 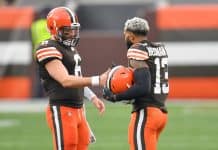 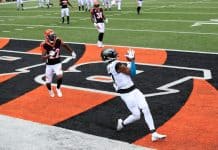 DJ Chark Fantasy Outlook: Should you risk starting him if he’s active in Week 6?