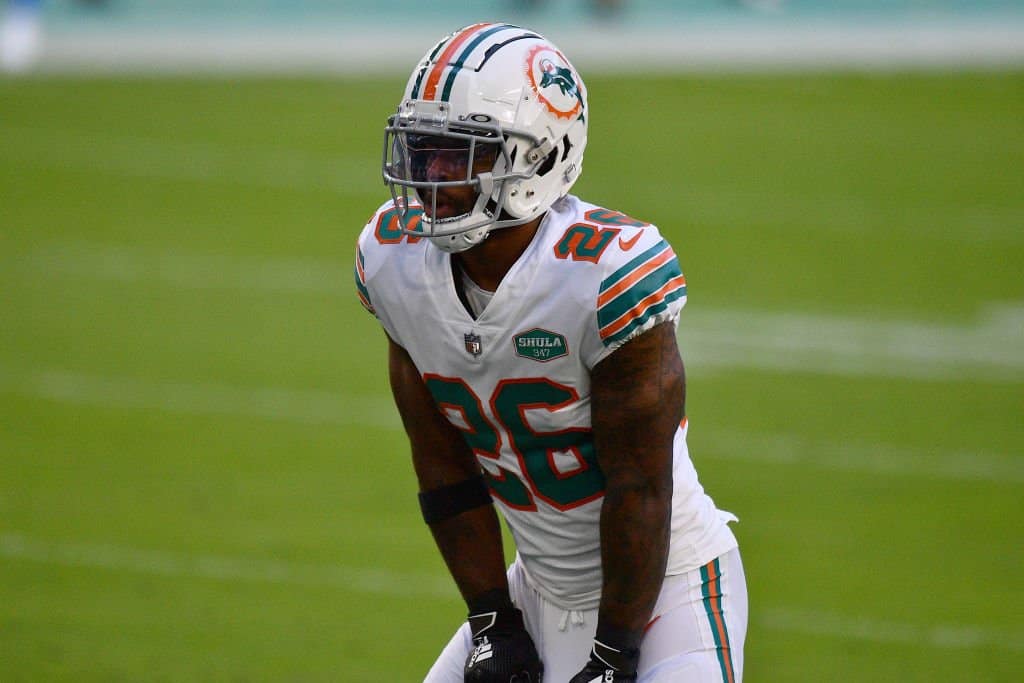 MIAMI GARDENS, FLORIDA - NOVEMBER 15: Salvon Ahmed #26 of the Miami Dolphins lines up against Los Angeles Chargers at Hard Rock Stadium on November 15, 2020 in Miami Gardens, Florida. (Photo by Mark Brown/Getty Images)
What's in this article? Click to show
Salvon Ahmed rushes for 122 yards and a touchdown in career day vs. Patriots
Myles Gaskin could return to action in Week 16
Don’t forget about Matt Breida, Patrick Laird, and DeAndre Washington
Should you start Salvon Ahmed in Week 16?

Salvon Ahmed rushes for 122 yards and a touchdown in career day vs. Patriots

The Miami Dolphins running back room has lacked consistency for most of the 2020 season. In fact, you could argue that no unit on the roster embodies Brian Flores’ “next-man-up mentality“ quite like Eric Studesville’s RB room.

But with lead back Myles Gaskin on the reserve list (he was activated this Wednesday) and a big Week 15 matchup vs. the New England Patriots, someone needed to step up and seize their opportunity. And that’s exactly what Salvon Ahmed did.

Ahmed carried the ball 23 times on Sunday for 122 yards (5.3 yards per carry) and a touchdown. The 21-year-old running back looked quick and decisive vs. New England, and Miami’s offensive line played with purpose. Couple that with Ahmed’s strong performance, Miami’s offense led the way with 250 yards on the ground in a decisive win over the Patriots.

Featured | Is Ahmed on your waiver wire? Anita Marks says scoop him up!

But it wasn’t only Ahmed that had a big day for the Dolphins on Sunday, and this is something everyone must consider before setting their lineup one last time this year.

Myles Gaskin could return to action in Week 16

Wednesday afternoon, the Miami Dolphins announced they had activated RB Myles Gaskin from the reserve list. Gaskin was the clear frontrunner in Miami’s backfield before the setback. The last time he was able to suit up, Gaskin rushed for 90 yards on 21 carries in a 17-9 win over the Cincinnati Bengals. According to FantasyData.com, Gaskin is averaging 10.1 fantasy points per game in 2020.

There’s a chance Gaskin returns to his RB1 status on Sunday, but after Ahmed’s season-best 122 yards, it’s going to be hard for Chan Gailey to take the ball out of the rookie’s hands. But remember, Gaskin has been the Dolphins’ lead back when healthy. So, keep a close, close eye on his status as we approach Saturday’s 8:15 start time.

Now that we touched on Salvon Ahmed and Myles Gaskin, let’s look at the rest of Miami’s backfield.

In Week 15, we finally had an opportunity to see what Matt Breida could do with double-digit touches in Miami’s backfield. The veteran running back carried the ball 12 times for 86 yards and looked a lot like the speedster we saw during his time in San Francisco. Could his role expand? Absolutely. But his touches, like Ahmed’s, hinge on Gaskin’s availability.

One running back that continues to be active on game day is second-year RB Patrick Laird. Laird should continue to be Miami’s third-down back but holds little fantasy value.

Featured | In an RB pickle? Check out the Week 16 RB rankings

DeAndre Washington, the running back Miami acquired in a trade with Kansas City Chiefs earlier this year, rounds out the Dolphins’ RB group. Washington carried the ball 13 times vs. the Chiefs but didn’t receive a single touch in last week’s game vs. the Patriots.

Matt Breida could be worth a desperation FLEX start in PPR leagues, but his production will be largely based on whether Gaskin is a go.

Should you start Salvon Ahmed in Week 16?

Ahmed could provide the spark you are looking for to push your fantasy football team over the hump and into league history.

The 2020 fantasy football season has been hard on everyone. And whether you’re one of the unlucky fantasy managers that drafted Ezekiel Elliott early on — and missed out on Tony Pollard on waivers — or watched as your top back Clyde Edwards-Helaire suffered a season-ending injury, you’re probably looking for the perfect play for this ever-important week.

Contextual factors to be wary of

Yes, there are a few in-house players that could steal some of those touches Saturday, with none bigger than his fellow Washington University teammate, Myles Gaskin. The truth is, these two players have yet to be active on game day together.

This could mean we finally see the Dolphins best running back tandem since Ahmed was claimed off waivers earlier in the year. Nevertheless, the time is now for Miami’s running backs to prove they belong — not only in 2020 — but in the future as well.

What happens if Gaskin is back?

I would feel a lot more confident in Salvon Ahmed’s fantasy value if Myles Gaskin wasn’t playing on Saturday. This means fantasy managers should keep a close watch on the news in the coming days. Will Gaskin start? Won’t Gaskin start? The answer to that could ultimately be the difference in a win and loss this championship weekend.

In the end, I can’t see the Dolphins taking touches away from Salvon Ahmed after that 20.1 point fantasy performance to try and force Gaskin back into the rotation, but never say never. If Gaskin does suit up, proceed with caution. But for those owners searching for an RB2 with a big-play potential, look no further than the Dolphins’ rookie running back.