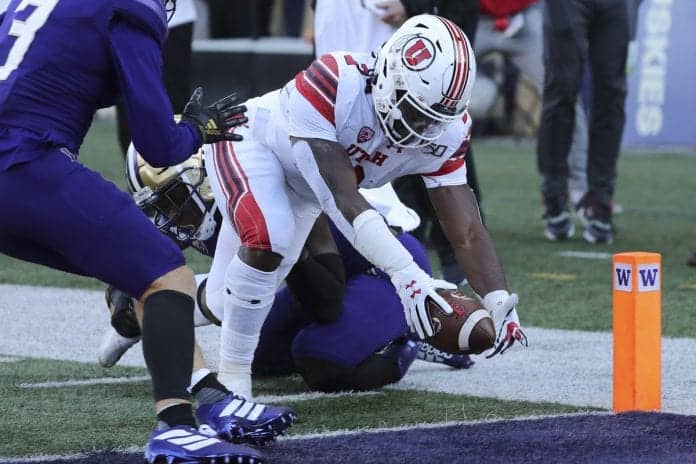 Though overlooked by many draft pundits, Utah running back Zack Moss is equipped to emerge from the 2020 NFL Draft as a premier sleeper prospect.

Around this time every year, a new wave of skill position players begin to headline college showcase games and mock drafts across the country. Many of those players are typically what teams project to be franchise quarterbacks and generational pass catchers at the next level. Whether it has been Alvin Kamara, Jordan Howard, Aaron Jones, Marlon Mack, or Chris Carson, running back has become a position where tremendous value can be found later in the NFL Draft, and 2020 is no different.  This year’s rushing sleeper is poised to be Utah running back Zack Moss.

Moss has proven time and time again to be among the most consistent running backs in college football over his four-year Utes career. This piece highlights Moss’ gaudy production, and delves into why he is best equipped to emerge from the 2020 NFL Draft as one of the premier sleeper prospects.

Even before Moss arrived at Utah, he was a known commodity.

The cousin of 14-year NFL veteran Santana Moss and former second-round pick Sinorice Moss, Zack Moss was coming off of a banner senior campaign at Halladale High School. The dual-threat running back rushed for 1,098 and 17 touchdowns on 145 carries, in addition to his 25 receptions for 425 yards and four touchdowns through the air.

The budding star had a lengthy list of four-year schools looking to acquire his services, but he ultimately chose the University of Utah to continue his promising journey.

As a freshman, Moss played in 10 games (three starts), while missing three games due to injury. He carried the ball 84 times for 382 yards and two touchdowns, serving as an integral part of a three-man rushing attack. In starts against San Jose State, California, and USC, Moss averaged nearly 84 yards on the ground.

The following season, Moss took the reins as Utah’s feature running back, playing in all 13 games (12 starts). The 5-foot-10, 222-pound bruiser proceeded to lead the Utes in rushing yards (1,173) and rushing touchdowns (10) on 214 carries, finishing seventh in the PAC-12 in rushing yards. He announced his arrival to the college football world at the conclusion of the season, however, erupting for 150 rushing yards and a touchdown against West Virginia in the Heart of Dallas Bowl.

Moss’ 2018 season would go down as memorable for a multitude of reasons. An ascending star and now a known entity nationally, Moss rushed for 1,096 yards and 11 touchdowns on 179 carries. Incredibly, he did this in merely nine games, as a devastating knee injury cut short what was shaping up to be a career year for the junior phenom. Perhaps more incredibly, Moss did enough in his abbreviated season to earn second-team All-PAC-12 honors. He averaged an astounding 121.7 yards per game, which was good for sixth-best in the conference. Moss’ awe-inspiring campaign included six 100-yard outings — and one 200-yard outing — against UCLA.

As the old adage goes: It’s not how you start, it’s how you finish.

A prime candidate for All-American honors and numerous preseason accolades entering his final season in Salt Lake City, Moss was prepared to shoulder the load on a Utes team poised for the national spotlight.

Despite the admirable consistency shown over his four years at Utah, Moss’ name is noticeably omitted from most top-10 lists, as we inch closer to the pre-draft process. Somehow, fellow ball carriers such as Cam Akers, Eno Benjamin, and Ke’Shawn Vaughn have managed to overshadow Moss.

Now, as talented as those players may be, they simply haven’t matched Moss’ sustained production. I would also argue that the trio doesn’t quite boast the high ceiling that Zack Moss possesses as a running back; a ceiling that includes an array of intangibles to become a rare three-down runner at the next level. One advantage those players have that Moss doesn’t, however, is that they play for high-profile programs, therefore garnering greater exposure and noteriety.

Moss has certainly made mincemeat of some of the doormats of college football, sure, but I’d counter that by also pointing to his production against some of the more relevant PAC-12 opponents, such as Arizona State, California, Washington, and Arizona.

At 5-foot-10, 222 pounds, Zack Moss has a skill set similar to Ravens’ leading running back Mark Ingram. A compact runner, Moss hits the hole with conviction, often capitalizing on the smallest crease to collect positive yards. His innate contact balance is among his finest qualities, frequently enabling him to forge ahead and drive the pile. Though his build would seem to indicate a strict, between-the-tackles runner, he also offers the lateral agility to find success on outside runs. He’s also shown to be well adept in catching the football in his limited opportunities, hauling in 59 receptions for 617 yards and two touchdowns.

Pass protection is the one area that most rookies tend to struggle with early in their careers, thus limiting their playing time. Moss, on the other hand, is fairly sufficient in this area; he will have a chance to prove that to NFL evaluators at the Reese’s Senior Bowl in January, in a bid to boost his draft stock for the looming 2020 NFL Draft.