Chase Claypool can provide instant value for Steelers in 2020

The Pittsburgh Steelers didn't have a first-round pick in the 2020 NFL Draft, but they made their selections count. There's a good chance Chase Claypool brings real value in 2020.

The Pittsburgh Steelers added to the receiving corps with their first pick in the most recent NFL Draft, selecting Chase Claypool. He can provide instant value for them in 2020. It was a down year in 2019 for star receiver Juju Smith-Schuster, as the Steelers dealt with below-average play at the quarterback position throughout the campaign.

Smith-Schuster was outgained in receiving yards by James Washington and Diontae Johnson, the latter finishing as WR12 by Pro Football Network’s Offensive Share Metric, which measures a player’s influence on his offense’s production.

With the return of starting quarterback Ben Roethlisberger from an elbow injury, much will be expected of each of that trio. However, Chase Claypool has the athleticism and the versatile skill set to eat into their target share and showcase his worth right off the bat in his rookie year.

It is not difficult to see what convinced the Steelers to select Chase Claypool with the 49th overall pick, with the former Notre Dame wideout offering incredible athletic ability at the position.

For his efforts at the NFL Scouting Combine, Claypool received a Relative Athletic Score (RAS) of 9.98 out of 10. Jeremy Chinn was the only prospect to outperform Claypool, earning a perfect 10 score. 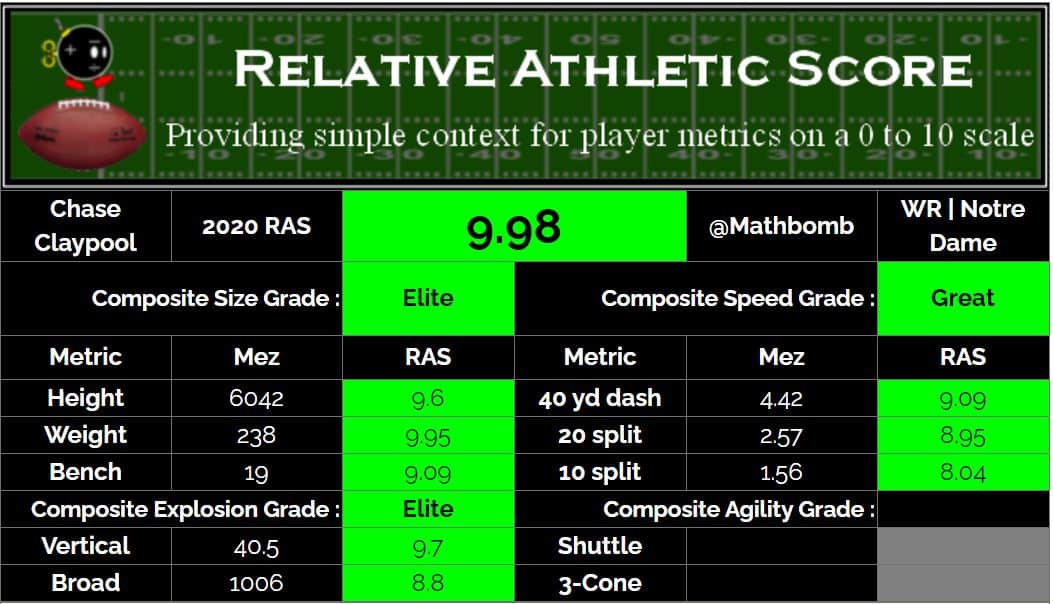 The 6-foot-4 and 238-pound Claypool earned an elite composite grade an elite explosion grade, with the latter primarily due to an enormous vertical leap of 40.5″.

Chase Claypool was not quite fast enough to earn an elite speed grade, though his time of 4.42 seconds in the 40-yard dash suggests he is a player with both the burst and long speed to gain and maintain separation at the next level.

He did not take part in the agility drills, though the tape indicates he has flexibility few would expect from a player whose size led many to peg him as a tight end in the pros.

Talk of Chase Claypool being utilized as a tight end was quashed by Steelers offensive coordinator Randy Fichtner who, per ESPN’s Brooke Pryor, anticipates using the second-round pick primarily as a boundary receiver and occasionally in the slot.

Claypool’s frame makes him a natural fit for the ‘big slot’ role that is growing increasingly popular in the NFL. At the same time, the former basketball player’s leaping ability and body control allowed him to thrive on the boundary for the Fighting Irish even in instances where he did not have the benefit of separation.

The combination of his frame and his high-pointing skills was key to this catch against USC last season, Chase Claypool intelligently using his hands to gain some separation from the cornerback before finding the football early and making the catch over the defender.

A more difficult adjustment was required for Claypool to make a critical catch against Georgia on which he twisted his body to make a one-handed sideline grab and get one foot in bounds.

Pittsburgh should be able to use other means than just tossing the ball up for Claypool to get him involved. Indeed, he showed his value in the short passing attack and the screen game during his time at Notre Dame, displaying agility he did not put to the test in Indianapolis on this third-down tunnel screen versus Iowa State.

Yet where the Steelers are likely to get the most value out of Claypool early in his career is in the red zone. According to Pro Football Reference, Seattle Seahawks quarterback Russell Wilson led the league with 25 passing touchdowns on 89 throws from inside the 20 last season. The Steelers’ quarterbacks combined for just seven on 47 attempts, a scoring percentage of 14.9 compared to 28 percent for Wilson.

The return of Roethlisberger should go a long way to improving that tally, and Claypool’s arrival also figures to be beneficial in that area.

Chase Claypool has proven he can dominate defenders at the catch point in the red zone. He again made the most of his size advantage on the touchdown that immediately followed his spectacular sideline grab against Georgia to create critical space from the corner that gave him time to make the catch and get both feet in bounds.

The addition of Chase Claypool brings more diversity to an offense many expect to rebound significantly in 2020, and his potential for early success should intrigue both the Steelers and those in the fantasy football community.

Chase Claypool, with his blend of size, speed, body control, and elusiveness, offers a skill set the Steelers did not previously have on their roster at wide receiver or tight end.

Fichtner’s comments indicate they already have a role in mind for Claypool, who proved in his college career that he could be productive while being used in a variety of ways.

Between his abilities at the catch and in the open field, Claypool is a high-upside big-play threat who averaged 15.7 yards per reception in 2019. It is unrealistic to expect him to dominate statistically to such an extent as a rookie. Yet, Claypool’s catch radius should make him a favorite of Roethlisberger while his red-zone prowess sees him enter the league as a legitimate scoring threat.

His production may be high variance as he adapts to the NFL without the benefit of a full offseason. However, if Pittsburgh’s offense fires on all cylinders with Roethlisberger back under center, Chase Claypool could quickly reward the Steelers for investing a premium pick in him and those fantasy players astute enough to select him late in drafts.