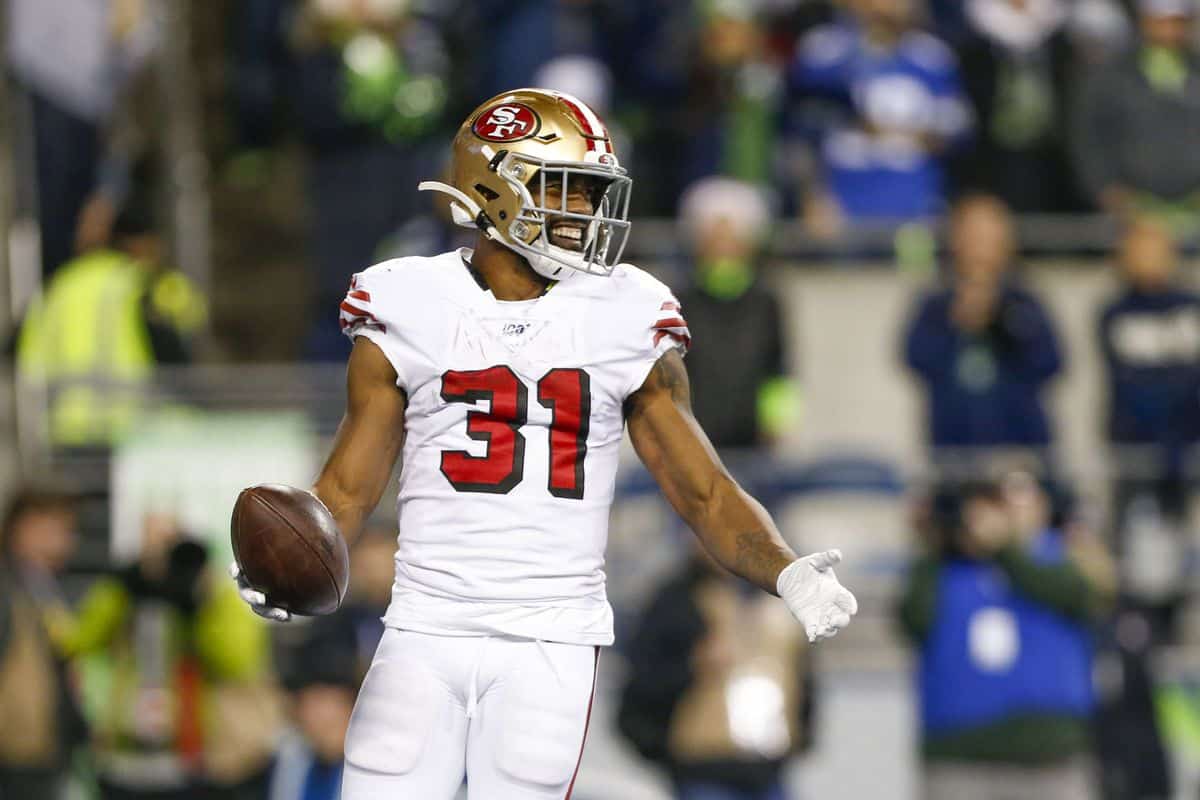 One of the toughest debates in fantasy football is the valuation of a player who finished the previous season on a hot streak. That issue is exactly the one facing fantasy players who are debating what the fantasy outlook is for Raheem Mostert in 2020.

In 2019, Mostert put up 772 yards with 8 touchdowns in total on the ground. However, the balance of his numbers is extremely slanted towards the back end of the season. Mostert scored seven of his eight rushing touchdowns in the final six weeks of the season. In that time, he also amassed 424 of those 772 yards. What that means is that of the 125.2 fantasy points Mostert scored in the running game, 67% of them (84.4) were scored in the final six games of the season.

The issue now is whether that strong finish carries over into 2020? Can Mostert continue to put up an average of 14 fantasy points per game when the season begins in a few weeks’ time? In this article, we will use expected fantasy points (xFP) and Fantasy Point Differential (FPD) to examine how sustainable Mostert’s 2019 season was and what that means for his fantasy outlook in the 2020 season.

How did Mostert’s performance in 2019 stack up?

Considering Mostert saw just 34% of the San Francisco 49ers offensive snaps in 2019, a 20th placed finish at the position was an impressive return. In fact, given that through 10 games of the season, Mostert averaged just 6.7 carries and one target per game, finishing as an RB2 on the season is extremely impressive.

Ultimately, Mostert’s finish to the season would see him finish above Week 1 NFL starters like Le’Veon Bell, David Montgomery, Carlos Hyde, Sony Michel, Devonta Freeman, and ahead of his own teammate, Tevin Coleman. All of those options, with the exception of Coleman, totaled over 200 touches, while Mostert came in with just 151.

Where did he rank in Fantasy Point Differential?

Mostert finished with a Fantasy Point Differential of 49%, scoring 54.6 more fantasy points than his expected fantasy point total of 110.6. That 49% was the highest FPD of any qualifying running back (xFP >50) in the 2019 season, and the fifth-highest of the last decade.

If we break those numbers down into the fantasy points Mostert earned carrying the ball in comparison to catching the ball, the numbers are just as impressive. His 0.91 rushing fantasy points per carry were the joint-highest in the league among backs with more than 50 carries and the leader when it came to backs totaling over 100 carries.

What does history tell us about the sustainability of Mostert’s performance?

We can break down the historical comparisons of this performance in two separate ways. First, we can look at how he compares to other backs in the Kyle Shanahan system over the past five years. Then we can compare his impressive Fantasy Point Differential to the rest of the league of the last decade.

The last five years in the Shanahan system has spanned between two teams, his time as head coach of the 49ers and his time as offensive coordinator of the Atlanta Falcons. In his time in San Francisco, no running back has produced a Fantasy Point Differential to the same degree as Mostert did in 2019.

The highest FPD during the three-year stretch was 10%, by Matt Breida in 2018, with Coleman’s 2019 season the next highest at 8%. If we look away from fantasy and at the actual numbers on the field, Mostert’s 5.64 yards per attempt and 12.8 yards per reception are also the highest numbers for a 49ers running back.

Related | What is Raheem Mostert’s value to the 49ers?

If we also look at Mostert’s Offensive Share Metric, which only takes his performance on run plays into account, he registered the highest OSM of any 49ers running back at 20.21. The next highest performance in those three years was the performance by Coleman in 2019 as well (19.53). Those numbers would indicate that in 2019, the 49ers found the perfect running backs to make plays in the environment provided by the Shanahan offense, which bodes well for Mostert and his fantasy outlook in 2020.

Did we see a comparable performance from a Shanahan back in Atlanta?

If we expand our view back to Shanahan’s time as the OC in Atlanta, then we do find a comparison of a back performing almost as well as Mostert in 2019. That performance came in 2016, by his teammate Coleman, who registered a Fantasy Point Differential of 43%. His numbers were also similar when it came to rushing fantasy points per carry (0.85) and receiving fantasy points per reception (2.94).

While this looks like a perfect historical marker to judge Mostert’s potential, the departure of Shanahan at the end of that 2016 season means that it is tough to work out whether Coleman’s decrease in production (FPD = 12%) was due to an unsustainable season, or due to the departure of his OC.

Historical comparisons around the league in the last decade

In the past decade, there have been 13 qualifying running backs to register a Fantasy Point Differential above 40%. Interestingly, three of those came in 2019: Mostert, Chase Edmonds, and Rashaad Penny. Of the remaining 10, Karlos Williams (2015 into 2016) did not register a score the following season, while Mike Gillislee (2016-17) and Kareem Hunt (2018-19) both changed teams.

What those numbers tell us is that history is not on the side of Mostert producing his extreme efficiency again in 2019. At the very least, fantasy owners should expect to see his efficiency decrease by 50%, with the potential that the drop off is much larger.

How has the fantasy outlook changed for Raheem Mostert in 2020?

The 49ers have not released an official depth chart yet for the 2020 season. However, the expectation of many unofficial depth chart providers is that Mostert will be the starter in 2020. This would reflect the role he was mostly occupying down the stretch in 2019.

Additionally, after a demand for a trade from Mostert, the 49ers restructured Mostert’s contract, adding $250,000 in signing bonus. While only a small change in terms and simply a movement of money already on the deal, it does demonstrate the 49ers are keen to keep Mostert happy entering the 2020 season. That would indicate that they are planning to rely on him again this season, especially given they had already traded Breida earlier in the offseason.

While the calculation for Fantasy Point Differential as well as the correlation between carries and rushing yards would indicate that running back production is largely independent of the surrounding factors, it is worth mentioning the changes this offseason. That is especially the case given the 49ers offensive line has ranked in the top 10 in the league in run blocking in each of the past three seasons.

The most notable change is the acquisition of Trent Williams to replace the retired Joe Staley. Staley clearly struggled at times in 2019, and Williams, who was largely an impressive run blocker in Washington, should be an adequate replacement. The bigger concern is the acquisition of Tom Compton, who struggled with the New York Jets in 2019 and will likely be a downgrade on Mike Person, who has also retired.

Whether the downgrade at guard will have a big impact is hard to know at this stage, but it is another concerning factor when assessing Mostert’s fantasy outlook for the 2020 season.

While 2019 was an extremely impressive season for Mostert, the signs are pointing in the direction of concern for his 2020 season. His Fantasy Point Differential is historically unsustainable and there is no obvious reason to expect that Mostert will see significantly increased touches this season.

However, his ADP does reflect this concern. Currently, Mostert is being taken between the 25th and 30th back off the board in both standard and PPR scoring. That ADP does leave some room for Mostert to outperform his ADP, but it does also leave you open to risk.

His seven touchdowns in a six-week span are a particular point of concern, given that Mostert had the highest percentage of touchdowns per red-zone carry (42%) of any back with more than 10 red-zone carries in 2019. If we see touchdown regression and continue to see the 49ers willing to use multiple backs, then Mostert could be an extremely frustrating player to own in 2020.

Ben Rolfe is a betting and fantasy analyst at the Pro Football Network (@PFN365). For all of our up-to-the-minute picks and analysis, follow the betting group @PFNBets and Ben @BenRolfe15.