The NFL Draft is 7 rounds, 256 picks long. Neal Driscoll takes no shortcut in this full mock draft, starting with Joe Burrow at 1st overall, all the way to pick 256.

Geno Atkins isn’t getting any younger, and Andrew Billings is a free agent. The Bengals must get some youth inserted into the middle of their defense.

Brandon Aiyuk’s draft stock is soaring and he could climb his way into the first round. If he falls, the Colts would be fortunate to snatch him up and pair him with the dynamic TY Hilton.

D’Andre Swift is a dynamic player in the mold of Saints’ star running back Alvin Kamara, and he would add a new dimension to the Lions offense. Swift is one of the biggest play-makers in this draft class and instantly brings credibility to the Detroit running game.

Zack Baun is a blue-collar, throwback type of player who fills a major need for the G-Men. Also, as his 12.5 sacks in 2019 would indicate, Baun excels at pressuring the quarterback.

A poor offensive line has been the Chargers’ Achilles heel for quite some time. Finding a way to improve the unit as a whole has to be a major priority for the Chargers, especially when you consider they are likely to be rolling with a rookie quarterback.

The Panthers and Greg Olsen decided to mutually part ways, and finding his replacement won’t be an easy task. One way to attempt to fill this void is by selecting the best tight end prospect in the 2020 NFL Draft. If he can stay healthy, Cole Kmet has Pro Bowl potential.

There was a time when Grant Delpit was widely considered a top-10 selection; however, an inconsistent 2019 campaign paired with poor tackling has taken a toll on his draft stock. With that said, Delpit has the god-given ability to be one of the best safeties in the NFL. 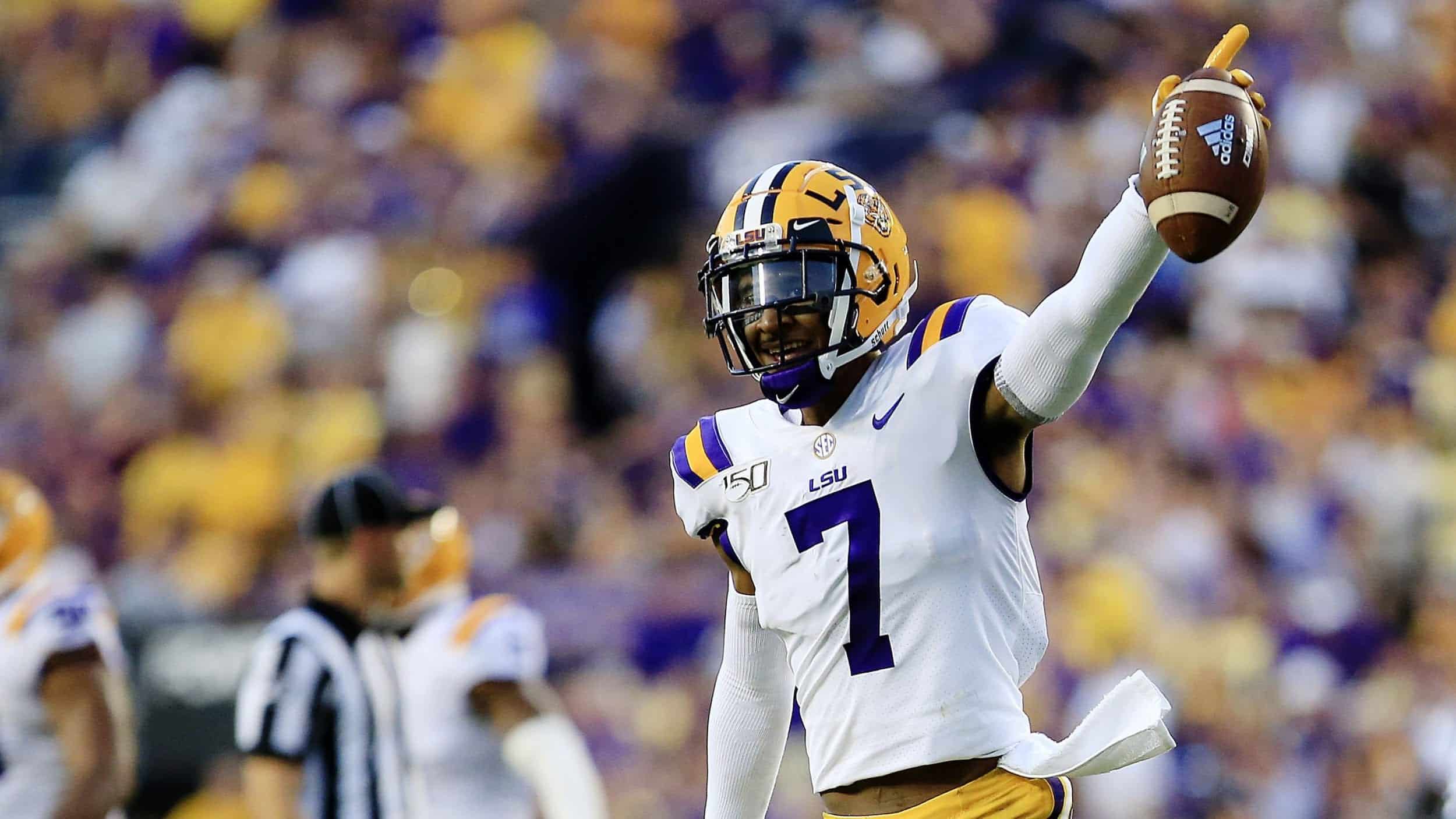 The Cardinals must protect Kyler Murray, and one way to do so is adding the best interior offensive linemen prospect in the 2020 draft. Cesar Ruiz is a big mauler who can be a building block for the Cardinals offensive line.

Outside of offensive line, safety is the Browns’ biggest need, and the speedster from Cal would be a great choice. Davis plays with tremendous instincts and should flourish as a free safety in Cleveland.

KJ Hamler brings game-changing speed to the table, and Jacksonville really needs to find a way to get their offense cranking. Pairing the explosive Hamler with D.J. Chark will give Jacksonville a young, exciting receiver group.

The Bears have a playoff-ready defense, yet their offense is stuck in neutral. Adding a big, athletic tight end like Brycen Hopkins would provide Mitch Trubisky with a reliable security blanket.

So far, the Colts have spent their draft capital on improving their offense. Now, it’s time to shift the focus on the defensive side of the ball. Neville Gallimore is a wrecking ball, who causes consistent penetration and disruption.

Devonta Freeman hasn’t been the player he once was as of late, so finding someone to improve the Atlanta rushing attack would be a wise move. Jonathan Taylor has a lot of tread on his tires but is a very productive runner with the ability to carry the workload.

Terrell Lewis is an explosive pass rusher who would be going much higher if it weren’t for an injury-riddled collegiate career. Lewis is long, explosive, and can bend. The Jets are desperate to find a pass-rush, and Lewis gives them a good start.

The Steelers have a championship-level defense, but the offense has more question marks than answers. A reliable tight end has been the backbone of the Pittsburgh offense for quite some time, and while Vance McDonald is solid when healthy, the position could use an upgrade.

If it weren’t for a season-ending hip injury, Lucas Niang would have been selected 20 spots earlier. He is a reliable player with good technique and rarely allows pressure. The Bears need to find out whether or not Trubisky is their guy, and by providing him a dynamic tight end and upgrading the offensive line, it’s now or never.

Amari Cooper is an unrestricted free agent, and it is hard to envision the Cowboys keeping him with their available cap space needed to give Dak Prescott an extension. Peoples-Jones didn’t put up great numbers but has the talent to be a much better pro player. The Cowboys love dynamic playmakers at the wide receiver position, and Peoples-Jones might be the next big thing for Dallas.

There was a time when Tyler Biadasz was considered a top-20 pick in the 2020 NFL Draft, but his tape in 2019 wasn’t great. With that said, he has the talent, and with proper coaching could develop into a quality player. The Rams’ interior offensive line took a major hit when they lost Rodger Saffold to the Titans in free agency, and it never recovered.

It is no secret that the offensive tackle position for the Buccaneers has been a turnstile, so finding stability there is vital.

Lynch is a poor man’s J.J. Watt. Yep, that’s bold. When you watch Lynch on tape, he plays like his hair is on fire and is relentlessly chasing the quarterback. Jerry Hughes isn’t getting younger and I am not sure you can trust Trent Murphy, so a player like Lynch could make a good Bills defense great.

The Falcons need help on all three levels of their defense. In 2019, teams passed all over Atlanta. Finding a corner with shutdown potential is a must.

Julian Okwara certainly looks the part and while he needs to find some consistency in the game, he could develop into a solid pass rusher. For whatever reason, the Lions defense took a step backward in 2019, but adding players like Jeff Okudah and Julian Okwara will get them back on track.

The Texans are a team that is on the verge of becoming a perennial contender. Unfortunately, for them to solve the left tackle position, they had to pay a king’s ransom to the Miami Dolphins to acquire Laremy Tunsil. They don’t have many draft picks over the next two drafts, so they have to use their picks wisely.

Trevon Diggs is a tremendous athlete with great balls skills who is still developing as a cornerback. This is a boom-or-bust type of pick, but a gamble well worth taking given Diggs’ upside.

Sometimes it is best to continue to build upon your strengths. Pairing Madubuike with a defensive line consisting of Linval Joseph, Danielle Hunter, and Everson Griffin is terrifying.

Drafting cornerbacks high is not typical for the Seahawks, but if they want to be a serious contender in the NFC, they need to improve the secondary.

A year after losing Za’Darius Smith to the Packers in free agency, the Ravens are poised to lose Matt Judon this year. Pair this with the slow development of 2019 second-round pick Jaylon Ferguson, and it’s more than apparent that the Ravens need to add some pass rushers.

A.J. Terrell had a rough National Championship game. He was torched all night by Joe Burrow and the LSU passing attack. With that said, he is still a very talented player with loads of potential.

Packers need help at the linebacker position and an ascending player like Jordyn Brooks could be exactly what they need. Brooks is a physical player with the ability to read and react like he is shot out of a cannon.

DJ Metcalf had a sensational rookie season and Tyler Lockett is a burner, but adding another weapon for Russell Wilson would help the Seahawks’ offense go to the next level.

The rich get richer, as the Chiefs have now added two studs to their defense. At this pace, the Kansas City Chiefs are going to be standing on top of the mountain for quite some time. Uche is a relentless and productive pass-rusher who can make an immediate impact on passing downs.