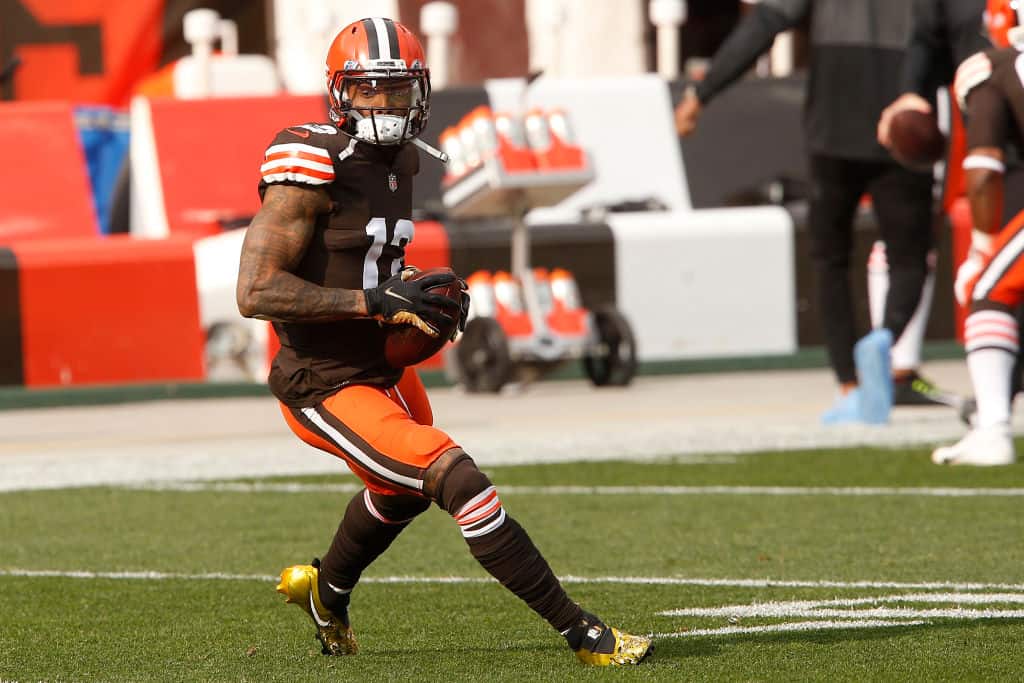 As with every new NFL season, there are a few things that are almost traditions due to their regularity. The yearly rumors of Odell Beckham Jr. being traded or released is one of those annual events. If it actually happens, where could be some potential landing spots for Odell Beckham Jr. beyond the Cleveland Browns?

Odell Beckham’s lost year has added to the trade speculation

Given the maturation of Baker Mayfield last season, had Odell Beckham Jr. been on the field all year, his potential landing spots likely wouldn’t be discussed. In Week 7 against the Bengals, Beckham suffered a torn ACL that forced him out of the rest of the season. At this point of the year, the Browns were 4-2 and would go on to win the game.

Adding fuel to the fire was in the November 1st report from NFL Network’s Ian Rapoport, stating that “there is a very real possibility” that Beckham doesn’t play for the Browns in 2021 and will be traded instead.

The question becomes — why would the Browns trade Odell Beckham Jr.?

Before Beckham’s injury, he had 23 catches for 319 yards and 3 touchdowns in 2020. In 2019, Beckham caught 74 passes for 1,035 yards and 4 touchdowns. While decent numbers for most receivers, they still were not up to par for the seventh-year WR, especially given his first three years in the league. He posted over 1,300 yards in each of his first three seasons with Eli Manning under center.

Even though that is a drop in production, to call it worthy of trading off a superstar like Odell Beckham Jr. is a bit extreme.

Some point to the in vs. out splits for Baker Mayfield. We have to consider Mayfield’s progression as a young QB and that Beckham was playing with a former two-time Super Bowl champion. There is a case to be said that Mayfield would lock onto Beckham. He would constantly be trying to force the ball towards him. However, is it worth cutting off your nose to spite your face?

Could that be enough of a reason to ship off Odell Beckham Jr. by releasing or trading him? Maybe, but the lack of other pass catchers makes me think otherwise. However, several teams would be intriguing landing spots for Odell Beckham Jr.

Never say never. And honestly, it does make sense. According to Over the Cap, the Patriots have the third-most cap at $62 million and have a gaping hole at wide receiver the size of the Grand Canyon.

Their leading WR was a UDFA from NC State (Jakobi Meyers), and N’Keal Harry has been a complete and utter disappointment. What if Odell Beckham Jr. was either traded to the Patriots or was released and landed here? Could he then pull a 2021 version of Randy Moss?

Could Trevor Lawrence and Jacksonville be a potential landing spot for Odell Beckham Jr?

Cap room (league-leading $82 million), hype, a new coach, the number one overall pick, and a need of receiving talent — Jacksonville has it all in terms of potential trade partners for Odell Beckham Jr.

Giving Trevor Lawrence a receiver group of Beckham, D.J. Chark, and Laviska Shenault Jr. sets up this new offense on an incredible path for success as their face of the franchise becomes more accustomed to the pace of play in the NFL.

Since Green Bay can’t draft WRs, could the Packers be a potential landing spot for Odell Beckham Jr.?

If you want the “fun” option, this is the one for you. Pairing up Aaron Rodgers with Davante Adams and Odell Bechkam Jr. would be incredible to watch from a fan’s perspective. The downside is Green Bay is $11.45 million over the cap if it stays at the estimated $180.5 million.

I would love to see Odell Beckham Jr. land in Green Bay somehow, whether it comes from a trade or release from Cleveland.

Does Bills Mafia have any tables left for one more celebration?

Buffalo is no longer a run-first offense. Josh Allen is a superstar in the NFL, and the Buffalo Bills are everyone’s closest favorite team. You can’t sit there and see the chemistry that developed on the field between Allen and Stefon Diggs and not get all warm and fuzzy inside.

Behind Diggs, who is their WR2? While Cole Beasley and John Brown played admirably, no one is fearful of them. It is also too early to know how Gabriel Davis will turn out. What if Buffalo traded for or picked up Odell Beckham Jr. to go along with Diggs if OBJ is traded/released? If this were to happen, no table in the greater New York area would be safe, or any AFC East defense.

Of the potential landing spots for Odell Beckham Jr, this is the one with the biggest possible ripple effect.

In this article:Featured, Odell Beckham Jr.