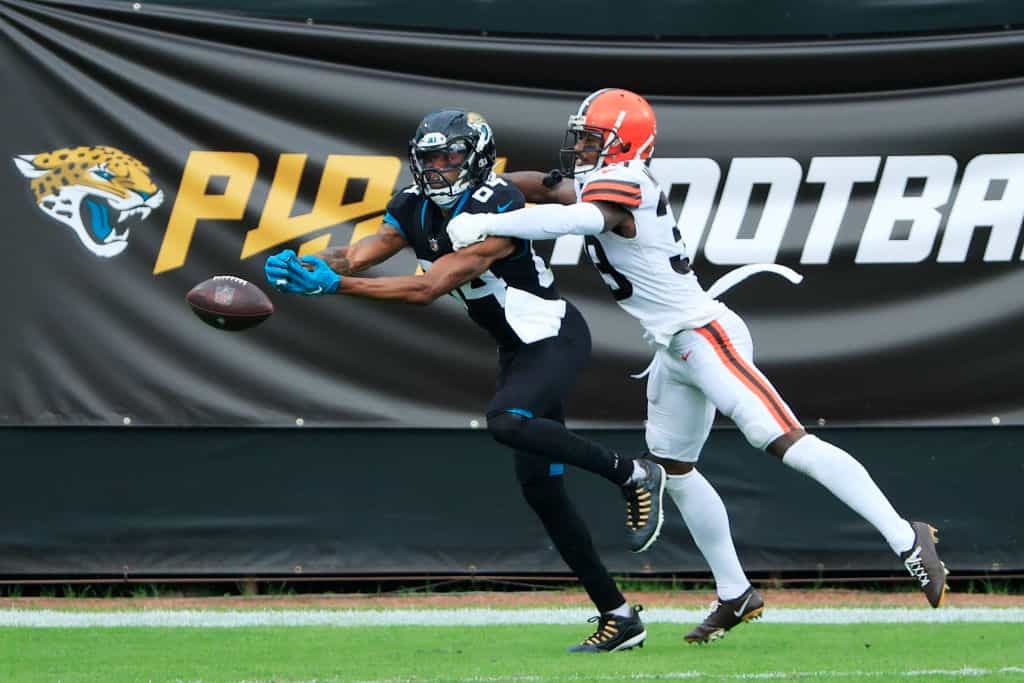 JACKSONVILLE, FLORIDA - NOVEMBER 29: Keelan Cole #84 of the Jacksonville Jaguars fails to complete a two-point conversion as Terrance Mitchell #39 of the Cleveland Browns in the third quarter defends at TIAA Bank Field on November 29, 2020 in Jacksonville, Florida. (Photo by Sam Greenwood/Getty Images)
What's in this article? Click to show
The Browns will have several defensive players hitting free agency in 2021
The Browns have two other secondary players set to be free agents in 2021
The Browns have to address the wide receiver position in free agency

Heading to the NFL Playoffs for the first time in 18 years, the Cleveland Browns face some difficult decisions in 2021 as several players, especially on defense, will hit free agency. Once the season wraps up for the Browns, decisions will need to be made on 25 players (16 unrestricted free agents) set to become free agents in 2021.

Featured | NFL Playoff Picture: What teams made the playoffs this year?

Let’s look at Cleveland’s important free agency decisions before their rivalry game with the Pittsburgh Steelers on Wild Card Weekend.

Of the Browns’ free agents, the defense will account for the majority of their decisions. GM Andrew Berry will have his work cut out for him in 2021 to keep Cleveland’s momentum rolling. Cleveland is a team that has hope and a direction for the first time in what seems like ages.

Olivier Vernon has been playing his best football as a member of the Cleveland Browns. He was relatively healthy in 2020, playing in 14 games. Vernon has been a tremendous complementary asset to Myles Garrett as the two combined for 21.0 sacks in 2020, with Garrett being named a first-team All-Pro member.

Talent alone makes it worth it for the Browns to bring him back. However, things aren’t that simple. First, Vernon turns 31 next season. He is also making $11 million after signing a one-year contract before the season.

All of this could mean nothing due to his recent injury. Vernon ruptured his Achilles tendon in the fourth quarter of the Browns’ 24-22 win. This injury could keep Vernon out for the entire 2021 season. Whoever decides to sign Vernon, whether it’s the Browns or someone else, the price tag became more reasonable heading into the 2021 free agency period.

Due to injuries ahead of him like Greedy Williams and Denzel Ward, Terrance Mitchell stepped up and played well on the perimeter. Mitchell, 29, is coming to the end of a three-year, $10 million deal he signed in 2017.

If he wants to get paid starter money, he would likely need to land somewhere else as he is a clear CB3 in Cleveland. However, you can’t have enough CBs, and with nickel coverage a staple, the Browns may look to retain him. It’ll be curious to see if both sides of the negotiation will agree on the price tag.

Both S Karl Joseph and CB Kevin Johnson could find themselves with new homes in 2021.

Johnson was on a one-year “prove-it” deal in 2020. Johnson, a 2015 NFL Draft pick from Houston, never seemed to put it together outside of his rookie season. He has one interception on his career but played okay in run defense, covering in the slot.

Joseph was essentially the same player that Raiders fans were accustomed to seeing. A player who can make some flashy and dazzling plays but also someone who gets beat for too often and struggles with injuries. It’s unlikely the Browns bring back either of these players during free agency in 2021.

Other Browns defensive free agents for 2021

All the focus on the Browns’ 2021 free agents is at the wide receiver position. In total, five receivers are hitting the open market once the season ends. Leading the group is Rashard Higgins. After Odell Beckham Jr. went down with a torn ACL, Higgins was the player to step up. He’s having the best season in his five-year career, hauling in 37 of his 52 targets for 599 yards and four touchdowns in 13 games.

The Browns lacked WR depth at the start of the season. There was no clear-cut WR3, and there was little room for an injury. Luckily enough, Higgins stepped up and filled a void as a reliable deep threat. Of the WRs who have contracts set to expire, Higgins makes the most sense for the Browns to bring back in the 2021 free agency period.

Taywan Taylor, KhaDarel Hodge, JoJo Natson, and Marvin Hall are also at the end of their contracts with the Browns.

Hodge and Hall combined for 12 receptions on 17 targets for 192 yards and no touchdowns in 10 games played. Taylor appeared in three games and played on 22 snaps in 2020. Natson has one carry for three yards.

Other Browns offensive and special teams free agents for 2021