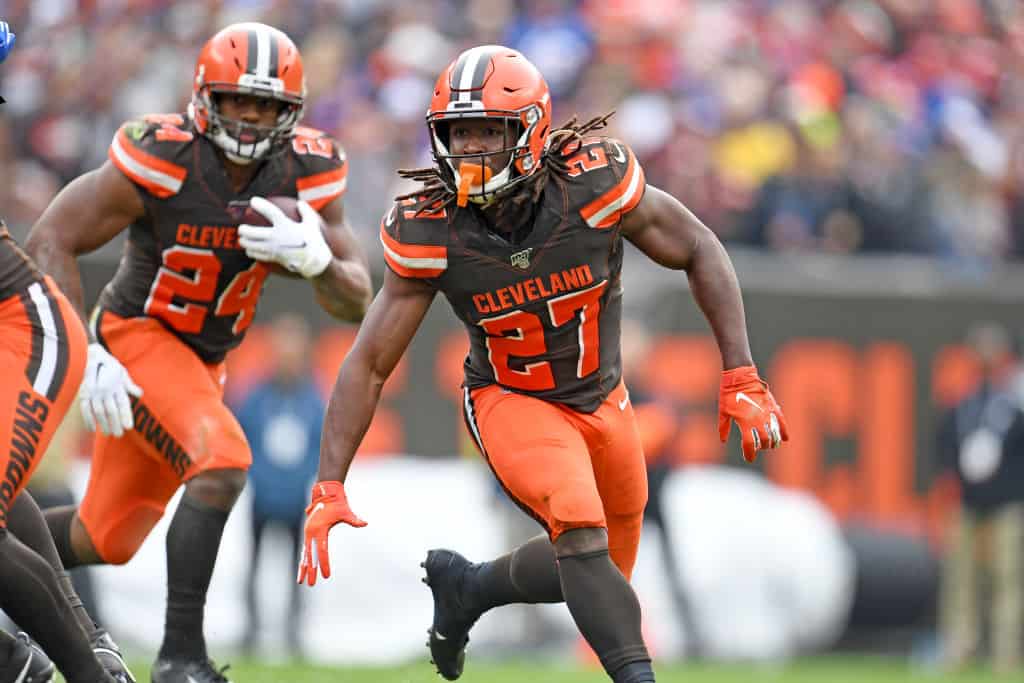 CLEVELAND, OHIO - NOVEMBER 10: Running back Kareem Hunt #27 blocks for running back Nick Chubb #24 of the Cleveland Browns during the first half against the Buffalo Bills at FirstEnergy Stadium on November 10, 2019 in Cleveland, Ohio. (Photo by Jason Miller/Getty Images)
What's in this article? Click to show
Cleveland RB Nick Chubb has teamed up with Kareem Hunt to dominate in fantasy
Which Browns RB can you trust in fantasy?
Want more fantasy football analysis and news?

Cleveland Browns RB Nick Chubb has returned from injured reserve after his knee injury and has teamed up with Kareem Hunt to give the Browns quite possibly the best fantasy backfield in the NFL. But having two high-quality running backs can cloud matters for fantasy football.

Hunt leads the Browns in rushing this year with 644 yards, but he has played in all 10 of Cleveland’s games in 2020. Meanwhile, Chubb is only 69 rushing yards behind Hunt but has only dressed for six games and only managed to play 14 snaps in Week 4 before he left that game. Chubb also averages an amazing 6.0 yards per carry compared to a very respectable 4.4 for Hunt. Chubb is one of the best runners in football at breaking off long runs and, frankly, one of the best runners in football, period.

But Chubb has only been targeted four times this year while Hunt has been thrown to 30 times. Hunt’s 151 yards and four receiving touchdowns boost his fantasy value, and with the depleted state of Cleveland’s wide receiver core, expect to see Hunt and Chubb on the field together (as they did with some regularity early in the year) with Hunt sometimes even assuming the role of the Browns’ slot receiver.

Nick Chubb and Kareem Hunt basically played equal snaps in Week 1 as the Browns were blown out in Baltimore. In the next two games, Chubb out-snapped Hunt 70 to 49, and then left the game early in the following week and missed the Browns’ next four contests.

Since returning from injury, Browns RB Nick Chubb has played 58 snaps compared to Hunt’s 74, but the Browns likely eased Chubb back into action two weeks ago. His role picked up vs. the Philadelphia Eagles. Still, Chubb has rushed for over 100 yards in both games since his return. In fact, if we eliminate the game in which Chubb was injured, he has run for over 100 yards in four straight games. These two are both going to see the field plenty.

Which Browns RB can you trust in fantasy?

Chubb is the top Browns RB of course, but these are two excellent football players, and they have defined roles in Cleveland’s offense. Looking at the depleted running back situations around the league right now, Hunt probably would be the lead dog for about 24 franchises this week after doing a quick count.

The Browns throw the ball on just 47.9% of their offensive snaps, which is the lowest percentage in the entire league. Only the Ravens and Patriots average more rushing attempts per game than Cleveland this year. There are a lot of carries to feed to both Nick Chubb and Kareem Hunt in fantasy.

There is a twist here, though. Over the last month, Cleveland has had their bye week and otherwise have played in three incredibly weather-affected football games at home. During that time, their percentage of called runs went up dramatically from where they were at early in the season when the weather wasn’t an issue.

Can both perform against the Jaguars?

This week in Jacksonville, where weather is unlikely to be a hindrance, against a terrible pass defense that doesn’t rush the pass well, and allowed the Steelers to throw all over them last week, Cleveland could throw the ball more than we have seen of late. This is especially true on first downs, a down that the Browns are especially run-heavy, but Jacksonville is especially poor vs. the pass. Only two teams are allowing more points per game than the Jaguars, and now Mike Glennon is quarterbacking Jacksonville’s offense. Obviously, this is a prime matchup.

Speaking of opponents, after going to Jacksonville, the Browns face the Titans, Ravens, Giants, Jets, and then the Steelers in Week 17, which doesn’t matter for fantasy. While there are some very winnable games in Cleveland’s future, giving them an excellent shot at getting into the playoffs, there are also some sweet spots for fantasy.

The Titans, Giants, and Jets are very generous in allowing fantasy points to the running back position, but take note that in the Giants case, that comes more from the receiving game, which favors Hunt more than Nick Chubb that particular week. Baltimore is basically in the middle of the pack, but who knows where this organization is really at right now, considering their situation. Still, that doesn’t look like a great game for fantasy production.

For this prime Week 12 matchup in Jacksonville and going forward for the rest of the year, view Chubb as an RB1 and Hunt as an RB2 in fantasy. And it isn’t an awful situation to have both on your roster or even both in your lineup…especially this week. Start them both.

In this article:Kareem Hunt, nick chubb