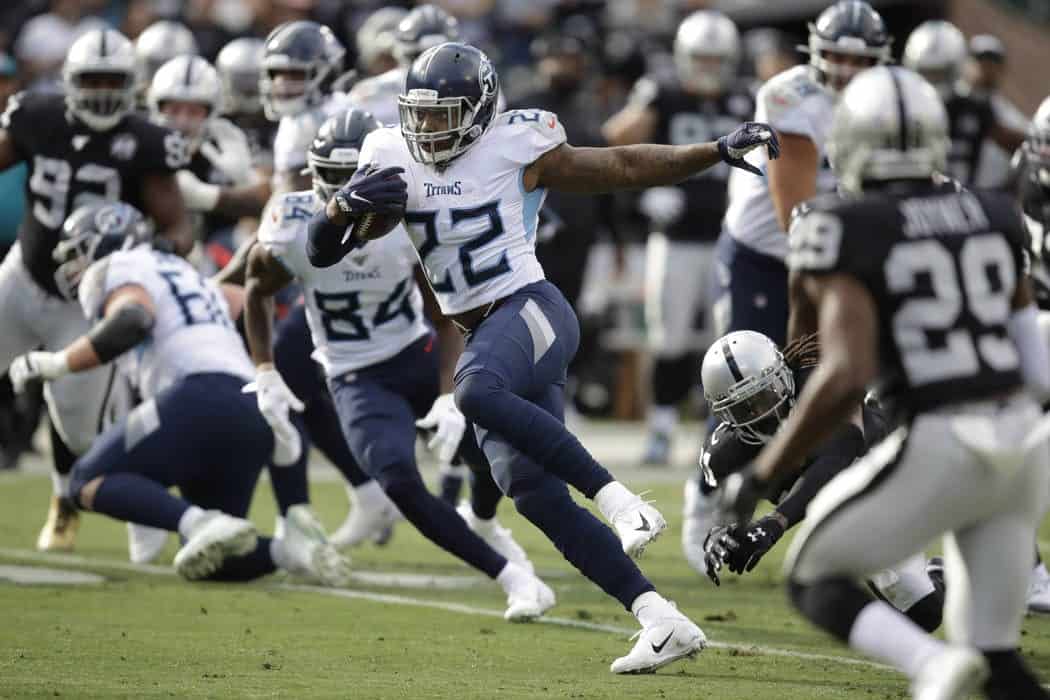 Photo Credit: Las Vegas Review- Journal
What's in this article? Click to show
Dynamic Trio pump out more hits in Music City
Is this the NFL or are we watching M.A.S.H.?
Jameis Winston continues to be a mystery.
Quick Notes from Week 14:

There is nothing like the sheer joy and brutal pain that comes from the fantasy football playoffs. 2019 will be no exception, as many of you know your fate after Sunday’s games. Some slept peacefully last night in a bed of comfort after being blessed by the fantasy Gods (they’re real, don’t mock them). However, many are joining the ranks of the unfortunate. They are forced to longingly watch the others who remain, like the kid who didn’t get picked for dodgeball from the sidelines. Fantasy football is like that, one day you’re in and the next you are out. Week 14 gave us quite a bit to unpack when recapping what happened. Everything from blow-up performances, stars that failed to shine, or the myriad of injuries that cursed the day. Whatever the reason, let’s go through it all in this Week 14 fantasy playoff recap.

Fantasy football is all about maximizing your picks at their given ADP in hopes of finding players who outperform them. That’s a massive key to success. It’s paying less to get more. Really, that kind of works for life now that I think about it. If you came into your Round 1 game in Week 14 with anyone of Ryan Tannehill, Derrick Henry, or A.J. Brown, you probably are advancing as they didn’t do anything to hurt you. I had high hopes for this offense, given they had the second-best DVOA split between the Tennessee Titans’ offense vs. the Oakland Raiders defense per Football Outsiders. However, I sure didn’t see a 42-21 shellacking coming that’s for sure.

Tannehill continues to be precisely what the Titans needed when the decision was made to bench the former Heisman Trophy winner Marcus Mariota. Tannehill finished his Week 14 performance by going 21-of-27, passing for 391 yards, with three touchdowns while only throwing one interception. Tannehill continues to perform as a high-end QB2/low-end QB1. Over the past seven weeks, only Lamar Jackson and Josh Allen have scored more fantasy points. Jeff Neil did a fantastic article on Tannehill the other day utilizing PFN Offensive Share Metric (OSM) detailing how he very well could win the 2019 NFL Comeback Player of the Year.

No one in the passing game has benefited more than rookie wide receiver A.J. Brown. In his Week 14 matchup, he gave his fantasy owners all they could ask for with their playoff hopes on the line. Brown’s 33.60 fantasy return was a career-best for the talented WR. Brown now has 25 catches on 38 targets, two 100-yard receiving games, and four receiving touchdowns since Tannehill took over as the Titans’ starter. Perhaps most importantly, Brown now has a 17.6% target share for the season and 20.8% in Tannehill’s starts, a sign that he’s developing into a potentially reliable WR2 or flex play option moving into the final weeks.

Once the topic of much debate preseason, Derrick Henry has closed the mouth of his detractors recently and continued to do so in Week 14. Carrying the ball 18 times for 103 yards and two scores, Henry has vastly outperformed his late 3rd to early 4th round ADP. Henry has four straight 100-yard rushing games in a row.

Derrick Henry over the last month:

While Henry did surpass 100 yards, it did not come at a cost as he was removed from the game a bit earlier than he wanted due to his hamstring. We will need to keep a closer eye on this moving forward, but for now, he is locked in as a top-tier RB1 heading into Week 15.

Is this the NFL or are we watching M.A.S.H.?

I am going to take a guess that most of you in your mid 20’s, like me, or older will get that reference. If not, then just search it on YouTube or ask your parents. The take away I had while watching Sunday was simply hoping my players survived their games so I can use them again next week in the playoffs. That is if I managed to make it out of these games. I think you will be hard-pressed to find a roster that won’t have someone with a new injury designation come Week 15. Every time NFL Redzone cut to a game, or you were scrolling through Twitter, it seemed a new name was added to the growing list of casualties. While we don’t know the full extent until injury reports come out Tuesday, here is a recap of notable fantasy players that were injured during Week 14:

Did I make my point yet that this week was awful for injuries? Add these guys to the list of Will Fuller (hamstring), Josh Jacobs (broken shoulder), James Conner (shoulder) who didn’t even play Sunday, and you will see fantasy players scrambling for waiver wire add before their next playoff game. Stay tuned as we will be posting our waiver wire article soon to help you. The news even came out that Odell Beckham Jr has a sports hernia that will require off-season surgery to repair, which means we need to watch his designations as well.

The main ones that I want to hit on are the injuries of Mike Evans, Derrius Guice, and Rashad Penny. Evans caught a deep pass from Winston and outran the cornerback to the endzone, but around the 8-yard line, you see him grab the back of his leg. That’s a tell-tale sign of a hamstring injury. I don’t expect Evans to see the field again in 2019. The Tampa Bay Buccaneers are now out of the playoff race and do not need to rush him back. Plus, we see it time and time again where someone returns too soon only to re-aggravate it. I would make plans to move on without him. The same can be said for Derrius Guice. Early reports sound like an MCL sprain, which would have Guice miss somewhere between 4-6 weeks. I don’t want to label someone this early as injury-prone, but between this and the ACL, the narrative will start to stick. Personally, I’m going to try to buy him in dynasty if the owner feels this way. Either way, he is done for 2019.

Penny’s injury is much more severe. Early reports after their loss to the Los Angeles Rams, sound like Penny severely sprained his ACL. Until the team gets the MRI results there still is the possibility of it being torn. If that is the case, we need to look at the possible fallout from it in longer terms than just this season.

Given the time frame this happened, I think there is a high chance we won’t see him play until 2021. These injuries can be an 8-to-12 month process unless you are a freak athlete like Adrian Peterson or Cooper Kupp. Penny could be, but let’s stick to the average and not the exception. If the Seahawks are not in playoff contention next year, there is no rush to bring him back until he is truly 100% healthy, both physically as well as mentally. There is a growing trend that we don’t see a player come back full for 16-18 months, not because of the ligament healing, but for them to trust it and be willing to play as they did and not be conservative. For 2019 and the fantasy playoffs, he is done. The best we can do is hope this is only a bad sprain of his ACL at this point. Either way, Penny can be dropped in redraft formats. As for Chris Carson, this is an obvious upgrade as he will not have to split touches with as much regularity given the remaining running backs available. He will likely see around 25 touches a game if we use games where Penny was out as our example. Carson will be a strong RB1 for the remainder of the season.

Jameis Winston continues to be a mystery.

Winston is such an intriguing person to watch play. It’s not that he is uber-athletic or dissects a defense pre-snap like Petyon Manning. It’s the fact that he can throw for so many interceptions and still manage to not kill his team. Maybe I should have called it maddening rather than intriguing. Winston added three more interceptions to his ever-growing season total Sunday, raising the level to 23. While he was at it, he also threw for 456 yards and four touchdowns for his third career 30+ fantasy point performance. Winston has a legitimate shot at throwing for 5,000 yards this year and produce two top-five WR options, depending on how far Evans falls due to his hamstring. Either way, you have to tip your hat to the guy. He fully embraces the saying, “shooters gotta shoot.” After Week 14, Winston sits at QB6 on the season and will likely remain a QB1 until we see how the Buccaneers look without their duo of wide receivers on the field.