Since taking over at the quarterback position in Tennessee, Ryan Tannehill has been playing lights out despite mediocre box score stats. How does he compare to NFL greats, such as Drew Brees? What puts him into consideration for NFL Comeback Player of the Year? Should the Titans sign him long-term?

By Jeff Neill
December 6, 2019
What's in this article? Click to show
No two quarterbacks are alike
Offensive Share Metric
NFL Next Gen Stats
What is Tannehill’s worth?

Ryan Tannehill, now in his 8th NFL season, has looked phenomenal after replacing Marcus Mariota as the starting quarterback for the Tennessee Titans. It’s reminiscent of his college career, replacing Jerrod Johnson midway through Texas A&M’s 2010 season before leading the Aggies to a Cotton Bowl appearance. However, Tannehill’s stats as a quarterback have often looked mediocre at best and are no comparison to those of elite quarterbacks such as Drew Brees or Tom Brady.

Set to become an unrestricted free agent in 2020, the Tennessee Titans will have to decide what to do with Tannehill after this season. On one hand, he’s led the Titans to a 5-1 record since being named the starter and they are still alive in the playoff hunt. On the other hand, his quarterback stats indicate he’s only averaging 200 yards and 1.5 touchdown passes per game. But the last thing the Titans want is to watch him succeed elsewhere and repeat the mistake the Miami Dolphins made with Drew Brees in 2006.

But would anyone seriously put Tannehill and Brees in the same category? A comparison between one of the most prolific passers in NFL history with a glorified wide receiver is completely asinine, right?

No two quarterbacks are alike

On the surface, there’s some validity to that statement as most people only consider box score stats when comparing quarterbacks, such as Tannehill and Brees. Yet, there is more in common between these two other than being standout high school quarterbacks who both suffered season-ending injuries in their 5th NFL season.

Looking at statistics alone through their first seven seasons, it’s hard to argue that one is significantly better than the other.

Perhaps the most impressive thing that isn’t noted above is that Tannehill was sacked a staggering 248 times prior to 2019 – nearly three sacks per game. Brees was sacked at about half that rate, accumulating only 126 – or, 1.4 sacks per game. Also, for the record, Tannehill has had more than twice as many fourth-quarter comebacks (15) than Brees (7) through his first seven seasons.

To date, 2019 has arguably been Tannehill’s best season, making him a surprising candidate for Comeback Player of the Year. When compared to Brees’ eighth season (2008) – a year in which Brees was named Offensive Player of the Year and earned a trip to his third career Pro Bowl – Tannehill’s quarterback stats seems rather pedestrian, other than his passer rating and perhaps his completion %.

However, when you compare their yards per attempt and per completion, it appears Tannehill is actually more productive than Brees. But how do you measure that production on the field?

Lucky for us, Pro Football Network has been doing it all season long. The PFN Offensive Share Metric (OSM) measures an individual’s production, relative to what they are in control of. As with most metrics (or scores), the higher the number, the better.

Tannehill currently sits at QB02 overall (behind Matt Stafford, who is currently sidelined with a back and hip injury) and has finished in the top 10 consistently each week since taking over as starter. If you consider weekly average OSM grades, Tannehill actually comes in slightly ahead of Stafford at QB01.

That means Tannehill contributes more to his team’s production than any other starting quarterback in the league right now. Compare that to Drew Brees, who is currently ranked QB12. Brees has only finished in the top 10 three times this season, with his worst game being last week’s Thanksgiving Day matchup against the Falcons on Sunday Night Football.

Tannehill’s OSM is so high, it’s almost twice that of his predecessor, Mariota, who is QB30 on the OSM list. Even Aaron Rodgers (QB28) and Tom Brady (QB29) can’t compare. 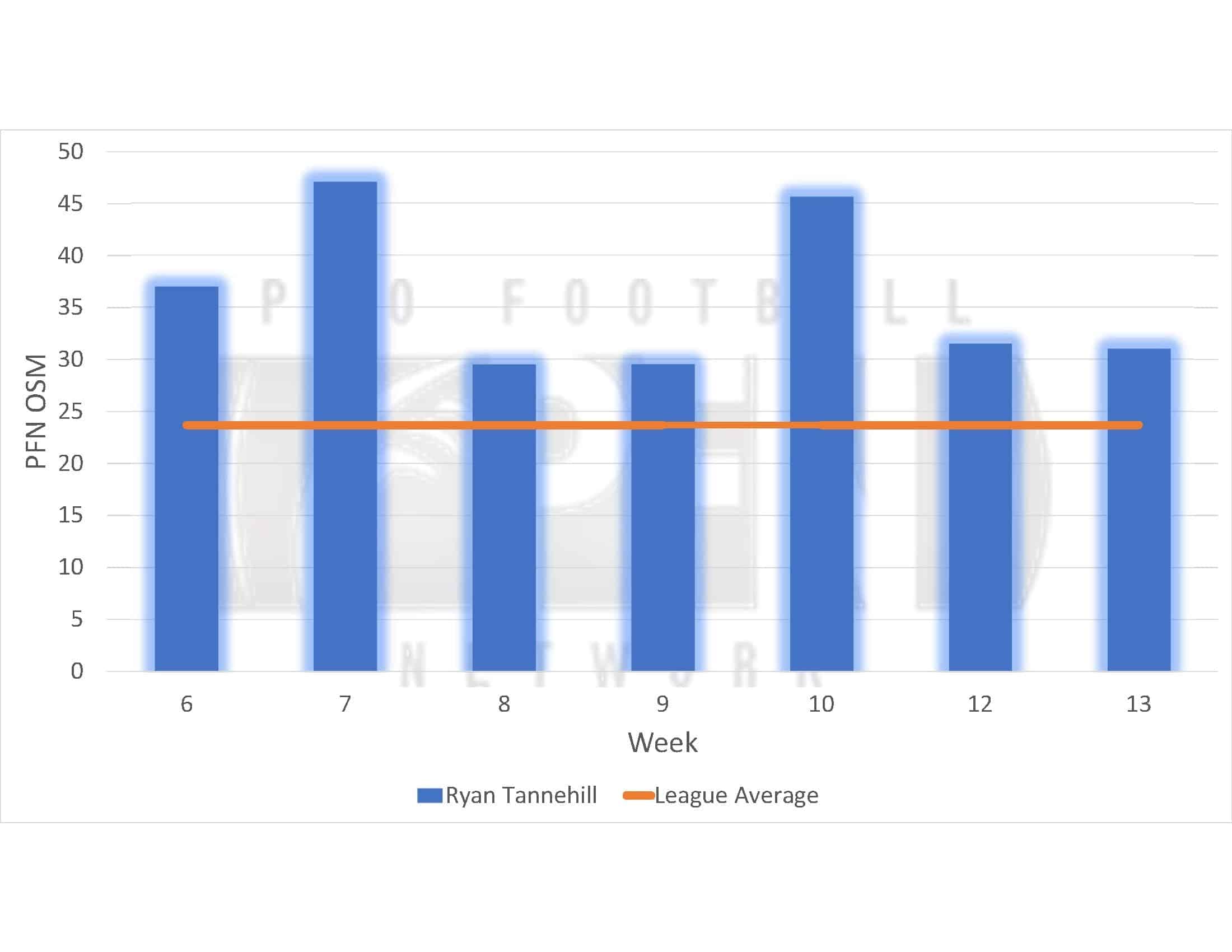 Some numbers factored into a player’s OSM are taken from the NFL’s Next Gen Stats, so it’s a good point of reference for determining what an individual is excelling at. Tannehill is outperforming Drew Brees in comparison with NFL Next Gen Stat categories for a passer but it’s his aggressiveness that is really setting him apart.

A quarterback’s aggressiveness is determined by the % of throws made when a defender is within one yard of the receiver. The league average is around 16% but Tannehill, not really known for being an aggressive gun-slinging quarterback like Brett Favre, is throwing into tight coverage nearly 21% of the time, in comparison to just 10% for Drew Brees.

When you consider Tannehill’s completion % is within 1% of Brees’, aggression (though not always a good thing) highlights how accurate Tannehill can be. 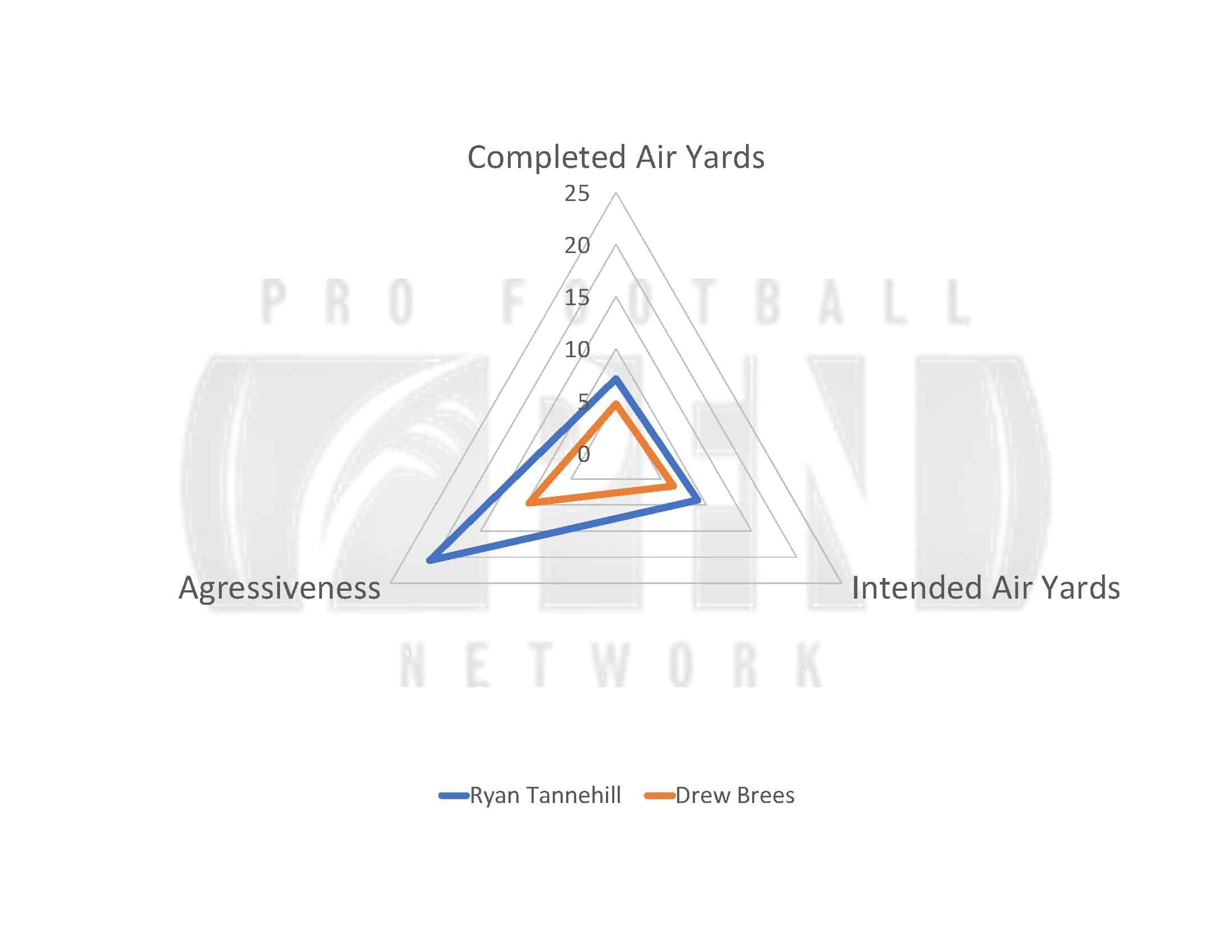 Another impressive NFL Next Gen Stat for Tannehill is his completion % variance. It’s the difference between his actual completion % and his expected completion %.

Tannehill’s completion variance is 9.6. In other words, NFL Next Gen Stats predict his 72.7% completion rate for the season should be closer to 63.1%. In fact, Tannehill has had a completion % higher than the league average (64%) in all but one game this year.

Also, his 9.6 completion variance puts Tannehill at the top of the list for this category. In comparison, Drew Brees is fourth on the list at 4.9. 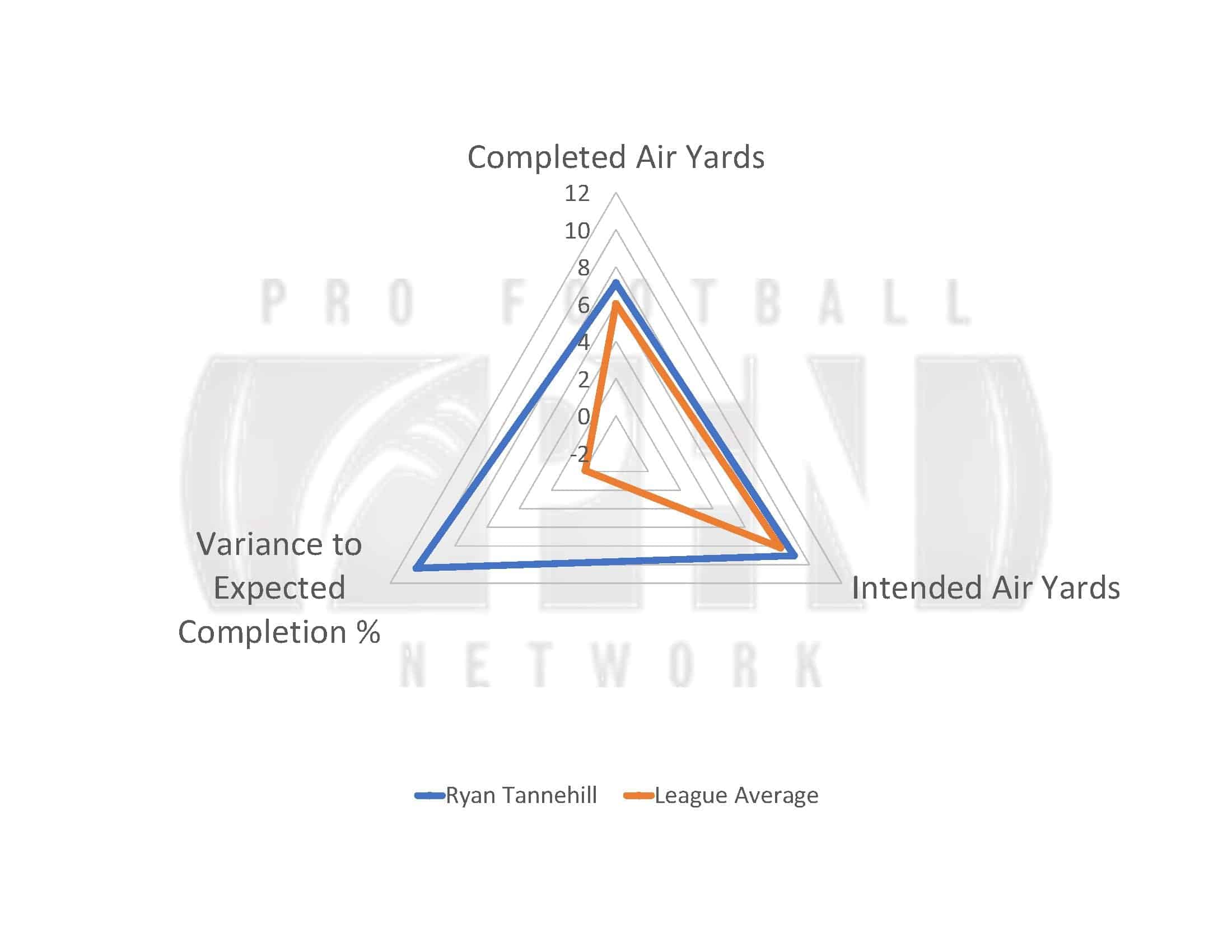 Tannehill’s variance, as with aggressiveness, tells us that he is producing much more than some of his numbers would indicate on the box score. Although Tannehill’s fantasy scores likely won’t come anywhere close to mirroring Brees’ – or Peyton Manning or Aaron Rodgers – PFN OSM allows us to see how valuable he is to his offense’s production.

What is Tannehill’s worth?

Speaking of value – at $2M this year, Tannehill has been a steal for Tennessee. At some point though, the Titans will have to decide Tannehill’s worth. Does he deserve a long-term contract? Would Tannehill draw enough interest in bigger markets to warrant using a franchise tag on him?

A franchise tag would likely cost the Titans around $27M, not an absurd amount for a starting quarterback in the NFL. However, Derrick Henry will become a free agent in 2020 as well. A franchise tag on him would land in the $12M-$13M range.

The likelihood of Tannehill being tagged is small. There are some quarterback-starved franchises currently, but most are in prime position to land one of the top QB prospects in the upcoming 2020 NFL Draft. There are other high-profile quarterbacks that will become free agents as well – Dak Prescott, Philip Rivers, Jameis Winston, Marcus Mariota – so his market is slim.

Even so, given the way Tannehill is playing right now, the Titans would be wise to extend his contract sooner than later.  He’s proven in the past he’s willing to sign franchise-friendly deals but his stock continues to rise with each passing week.