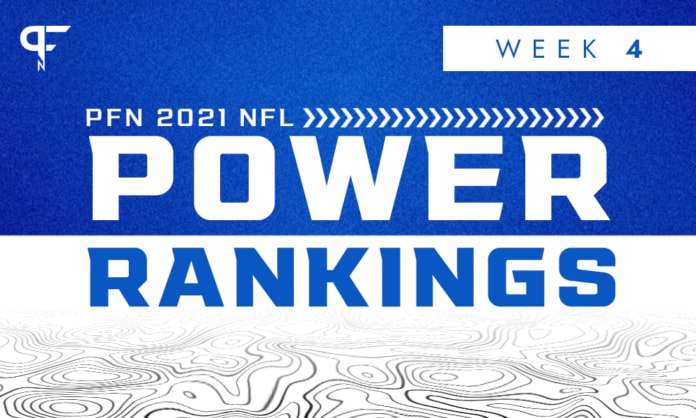 The Week 4 NFL power rankings are here! Does your favorite team make it into the top 10? Or are they at the bottom of the list?

The Week 4 NFL Power Rankings aren’t going to look very similar to last week, but there shouldn’t be massive changes from here on out. These rankings are based on what I’ve seen from each team so far this year, with an eye toward how I think their respective futures will pan out.

Football is back, both in reality and in the ratings. And man, there have been some insane moments so far this year.

The season is already over for these teams. That doesn’t mean there’s no reason to watch — it just means they don’t have a snowball’s chance in a pizza oven of making the playoffs. But most of these teams still have something to play for.

The Jaguars are well below average in offensive efficiency, and things aren’t much better on the other side of the ball. Most of their problems defensively stem from issues with pass defense. They’re allowing nearly 9 yards per pass attempt and are conceding 30 points per game.

It’s going to be a long year for everyone in Jacksonville.

They faced the Cincinnati Bengals on Thursday Night Football, and after getting up to an early 14-point lead, lost their offensive efficiency. They allowed the Bengals to tie the game and eventually score a last-second field goal to win it. However, even in a loss, Lawrence played the best football of his young career thus far.

This is a terrible football team. Without Mekhi Becton, New York’s offensive line is practically doomed. Zach Wilson has struggled mightily as a rookie, throwing 6 interceptions in his first three games.

The Jets are actually performing quite well on defense from both a volume and efficiency standpoint. They’re above average in rushing and passing efficiency, and they’ve been particularly good on third down.

If the offense can find its way somehow, New York could surprise some folks down the stretch. But with how poorly Wilson has played so far, it’s hard to see how he significantly improves in Year 1.

Chicago’s offense is pathetic. Justin Fields was under siege for the entire day, and he struggled against pressure. Maybe Matt Nagy had a good reason not to start Fields to open the season? But there is a longer list of reasons the Bears could hand Nagy his walking papers soon.

The Bears’ offense was a dumpster fire for most of Week 3. It wasn’t until midway through the fourth quarter when Chicago managed to get their average yards per play above 1.

The Texans battled before Tyrod Taylor got injured in Week 2, and despite an admirable effort by rookie QB Davis Mills, this offense just doesn’t have much outside of Brandin Cooks. We thought Houston would be one of the worst teams in the NFL, and despite a surprise victory in Week 1, I can confidently say they’re overmatched.

The offense is anemic. The Texans were 1-9 on third down against the Panthers, and they averaged less than 4 yards per play. Houston will struggle for the rest of the season, but the team has played respectable football given the lack of talent on its roster.

This is a bad football team. There’s no hiding that fact. However, the Lions have faced three top-10 teams in the San Francisco 49ers, Green Bay Packers, and Baltimore Ravens. Detroit has battled each and every one of them despite being grossly outmanned.

The Lions seem to be taking to Dan Campbell in a way I haven’t seen since Detroit employed Jim Caldwell (who probably deserves to be a head coach somewhere). Hopefully, ownership allows Campbell and general manager Brad Holmes to build this roster before giving up on them.

New York’s offensive issues are their own doing. Dave Gettleman chose the wrong offensive tackle in the 2020 NFL Draft, and whoever hired Jason Garrett to run the offense should have to fire Garrett and then themselves. The result is a truly bad offense and the 27th spot in the NFL Power Rankings.

After only fumbling once in the first two weeks of the season, Daniel Jones had trouble on Sunday. He fumbled twice, but the Giants were able to recover both. Aside from that, Jones has performed admirably despite a poor offensive game plan.

With the Saints, Cowboys, and Rams coming up on the schedule, there’s a chance this team is winless heading into Week 7.

Our greatest fears are being realized. The Falcons don’t have much keeping us interested in their season — and they’re completely ignoring one of them. I can’t think of a legitimate excuse not to make Kyle Pitts a pivotal part of the offense. Heck, for three-quarters of the game against the Giants, Pitts wasn’t even targeted.

Atlanta’s defense finally looked serviceable, but the Giants have an awful offensive line and play-caller in Garrett, who is in over his head. Just get the dang ball to Pitts so we have a reason to watch.

Going with Carson Wentz was always going to be a gamble. The hope was he’d improve on some of the bad habits that plagued him in 2020. We also hoped the change of scenery would help his frame of mind. That hasn’t happened — at least not yet.

The Colts’ offensive line hasn’t been as spectacular as usual through three weeks. Injuries and poor play have definitely contributed to the front five’s lack of success, but Wentz’s heroic play style is also a problem.

Add in a group of receivers that can’t seem to separate, and you have a team that’s struggled offensively through three weeks.

When the PFN staff voted on the initial NFL Power Rankings, we had the Pittsburgh Steelers at 25th. I let a late preseason performance sway me to believe that Ben Roethlisberger still had, well, anything left. It turns out that not valuing the offensive line is a poor way to construct a roster with an ancient quarterback.

I feel bad for Najee Harris. It’s clear he’s stuck in a bad situation, but I hope he keeps up his impressive attitude during press conferences. He’s a refreshing voice. The past two weeks have also proved just how valuable T.J. Watt is to this football team. They need him back in Week 4 if they want to have any chance to upset the Packers.