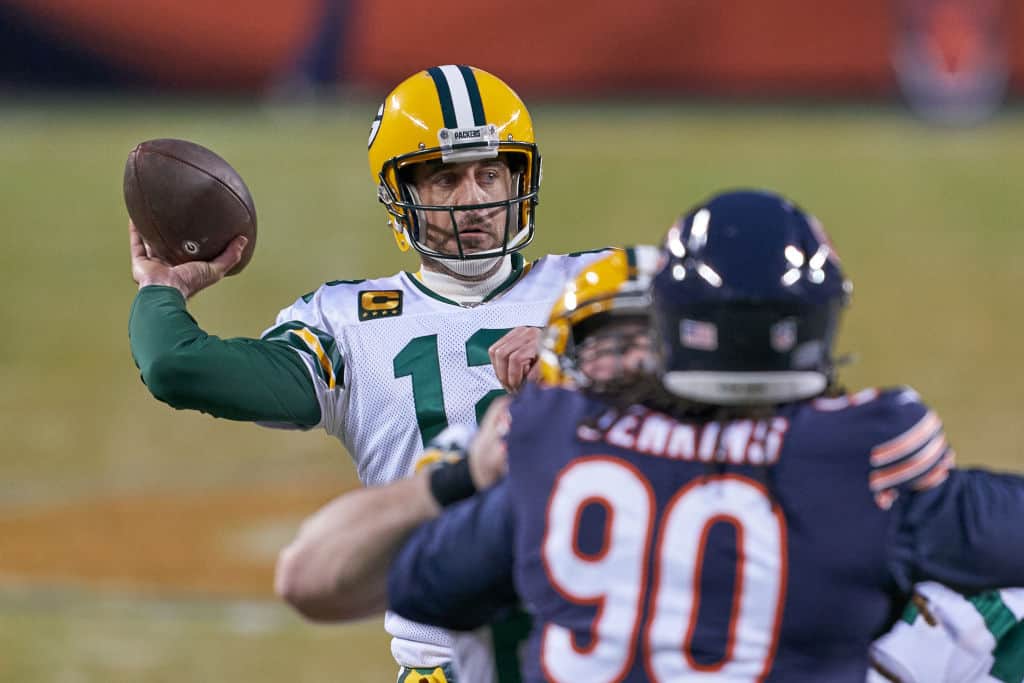 Wildcard Weekend did not disappoint, and the playoff field has thinned from 14 teams to eight. As we head into the divisional round, let’s take a look at the betting lines and make our NFL playoff picks and predictions for the upcoming weekend.

Six teams have already been eliminated from the 2020 NFL playoffs, and another four will join them this week. With so much on the line, let’s take a look at the value in the betting lines and odds and bet accordingly.

Analysis of each game can be found below the table. The divisional round NFL odds below are from the William Hill Sportsbook.

The Rams pulled off the somewhat surprising upset on the road in Seattle. That said, Jared Goff’s thumb is a clear problem, and he is not at full strength. It was a sloppy game for both offenses, but luckily for the Rams, the Seahawks had no answers for their pass defense outside of one long touchdown to D.K. Metcalf. Los Angeles’ defense could be without Aaron Donald, which is the last thing they need at this point in the season.

The Packers will be fresh after a week of rest and playing in the friendly confines of Lambeau Field which is sure to be frigid. While the Rams defense has been superb, so has Aaron Rodgers. Rodgers will more than likely be named MVP, finishing the year with 48 touchdowns to just five interceptions and seemed to have an answer for every defense thrown at him.

Green Bay’s explosive offense combined with the Rams’ lack of explosiveness makes this one of the easier NFL Divisional Round picks; Green Bay wins at home and covers the divisional round betting line.

Lamar Jackson got his first playoff win, as did Josh Allen, to set up this playoff matchup of 2018 first-round quarterbacks. While Baltimore’s defense is hot, it’s still clear that they cannot win by passing the ball. Jackson threw a bad ball that looked like it was intended for Malcolm Butler as he intercepted it. Jackson ran the ball exceptionally well, yes, there is no denying that, but in a game against the high-flying Buffalo Bills, you need to make key throws in order to win. Baltimore will also need their defense to match their performance in Tennessee next week in Buffalo.

Buffalo Bills fans rejoiced as their team won their first playoff game since 1995. Josh Allen and Stefon Diggs picked up where they left off in the regular season, connecting for a deep touchdown to help the Bills defeat the Colts at Orchard Park as the Bills earned their first playoff win in 26 years. One thing that does make me pause while looking at this game is the Bills’ run defense. If they sell out to stop the run and make Jackson throw to win the game, I like their chances.

The NFL betting lines like Buffalo, as do I. I’ll take the Bills and the points.

What a game it was for Cleveland. They scored the most points in a quarter (28) in postseason history en route to beating the Steelers for the second time in a week to earn their first playoff win since 1994. Defensively, they did allow the most completions in an NFL game that we have ever seen but remember that the Steelers were throwing every play from the first quarter onward due to that nightmare start.

The Browns intercepted Ben Roethlisberger four times and capitalized in every way imaginable offensively. Nick Chubb and Kareem Hunt both had big nights, and Jarvis Landry’s long touchdown reception to make it 14-0 early in the first quarter was the match that started the fire for Cleveland. That said, this is a completely different game when it comes to analyzing the divisional round betting lines.

The Chiefs offense is a different animal, and we could see it unleashed on Cleveland this weekend. While they were slow down the stretch, they have had a week of rest and preparation while the Browns were dealing with plenty of issues leading up to their matchup with Pittsburgh. Even when the Browns are fully healthy, look at the plethora of weapons on the Chiefs’ offense. If it isn’t Travis Kelce, it’s Tyreek Hill. If it isn’t Tyreek Hill, they turn and run with Clyde Edwards-Helaire. Not to mention Mecole Hardman or any of the other flash-like receivers on their roster.

I like the Chiefs to win to set up an AFC Championship game between the Bills and Kansas City. However, I will favor Cleveland in the NFL betting lines and say they cover the 10 points in my NFL divisional round playoff predictions.

The Saints had the Buccaneers number in both matchups between the two teams this season. New Orleans’ defense played spectacularly against the Bears and, aside from a touchdown with no time left, kept them out of the end zone. It wasn’t pretty for most of the game offensively, but Michael Thomas had a much-needed big game to give their offense some sort of life that didn’t come in the form of Alvin Kamara.

Tampa Bay’s offense played well against Washington but they let Taylor Heinicke keep it close until the final drive. The passing game was in sync all game, though. Antonio Brown had a walk-in touchdown, and the Buccaneers offensive line kept Tom Brady clean for most of the game. However, one thing that Tampa would like to see is fewer drops from Chris Godwin. He played well but had some drops that were uncharacteristic of him. While the Saints’ defense is great, their offense has looked lethargic in several games this season.

I can’t see any team beating Tom Brady three times in one season, and for that reason, I’m going to pick the Bucs in one of the more competitive NFL playoff games of the week.